As we celebrate our nation's birth on the 4th of July, I can't help but reflect on how I came to my belief in what makes us truly American. It happened when I was 18 in a foreign country, as the lone American in a sea of non-Americans, holding and hugging an old woman I did not really know.

I had reached the end of a very long, twisting trail of extremely unlikely events. It had started when I had been placed into international adoption from Korea when I was nearly 7 by a destitute mother who scraped by as a prostitute to American GIs.

Through a series of improbable clues and coincidences, I had tracked down my birth mother and she was supposed to be waiting for me here. I had just cleared customs at the ferry terminal in Busan, Korea. I was met by a sea of black hair and Asian faces, so very different than what I was used to seeing, growing up in Minnesota. She's not here. I felt literally crushed, hollow and numb. As time wasted by, I stood blank and alone, not knowing what to do.

Suddenly, I heard a shout that contained a name that I had not heard in more than a dozen years. People turned in the direction of the sound, including me. Pushing past a knot of people, a tiny old woman came hobble-running toward me. I immediately recognized her. Her face was much more weathered, wrinkled, and lined; but it was definitely her.

It was my birth mother.

She had been my whole universe when I was a tiny, frightened, desperately poor, starving child. She had been my air, my water, my sun. Before I could respond or react, she was on me and hugging me tightly. Maniacally. She kept saying my Korean name, over and over, as if it were some sort of mantra. Or prayer.

I was struck by how small she was. In my memories, she had been a towering person, a figure who loomed larger than anything in my world. It was shocking to now see her as she really was. A simple, small peasant woman; limited, human and real.

I felt triumph in completing the long path of clues and steps to actually find her. And there were the feelings that I had crammed down for all those years, forcing myself to only feel in the present, never the past. My yearning for her when I was so small came roaring back. I threw my arms around her tiny shoulders and held her tight. Unbidden and forgotten until now, the name, in Korean, that I had known her by popped into my head and through my lips.

It was the only word, the only name that I had known her by. And the two of us held each other, swaying back and forth and calling each other's names. My mother finally stepped back and looked at her son and I looked at her.

And I realized that I was seeing her in two separate ways simultaneously.

There was a lens in my perception that still saw her through my 6-year-old's eyes; she was my mommy. The emotions tied to that were surging fully through my being. However, at the same time, I was seeing her as a stranger and a foreigner, as an American would perceive a small, wrinkled elderly Asian woman whom he had never met. There was a part of my mind that told me that I knew nothing of who this woman really was. I didn't know her favorite color, her preferred food, her friendships, her family, her humor, her beliefs -- nothing. 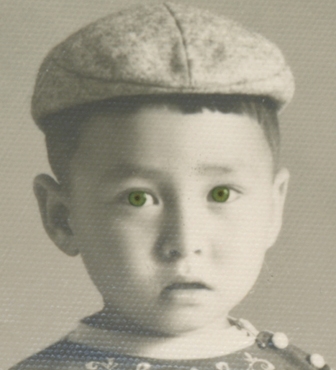 As I looked at my birth mother, I knew that a small boy with a Korean name still loved his mother with all his heart. The desperate need and love I had felt for her as a small child still was within me.

But in a shocking, utterly unexpected flash of revelation, I suddenly understood a simple truth with every part of my reasoning, heart, and eternal soul.

I was no longer that little boy.

The child who left on a jet plane twelve years ago, never landed.

The beginnings of who I was now had landed and had been met by a family and a world that was American and would become...mine.

"To other people, you are who you are based on what they see you do. Remember, you are what you do." I recalled these words, often repeated to me by my American mother as I stood looking at my Korean mother; and I realized that I was truly and fully a part of an American world. And I felt with a rare certainty and profoundness what made me truly American.

We are Americans because of what we do. We are not tied by national genetics, or an original patch of dirt in a faraway place, or a particular God or gods or a faith. It is our actions that define us as Americans, not the accident of our births, or our thoughts, our secret hearts, or even our words.

Americans may be equal, but we are not all the same. It is the willingness of one American to defend the right of another to be different -- to think, to believe, to live in ways and to say things that one may vehemently dislike. But we will act to defend this differentness, this right to be free and unique -- even at risk of death.

It was a stunning revelation for me.

Through all the years I'd struggled with who I was - as a biracial, adopted, outcast product of commercial lust and economic desperation and the daily differentness of my American family - I finally knew my identity. I was an American.

This 4th of July, as I join in celebrating our Founding Fathers' creation of America, I am grateful for my American life and I celebrate the courage of my two mothers - women who loved outside themselves and far beyond their own horizons.

Joel L. A. Peterson is author of the recently released novel, Dreams of My Mothers