Growing up, I always used to dread family trips to India. As the son of immigrants who was often caught in between two worlds, visiting India meant occupying a third space during my visits: an American outsider expected to be familiar with a land and culture that bore my parents and ancestors.

Trips to Tamil Nadu, from where my family originates, have evoked mixed emotions. As a journalist, I covered the aftermath of the 2004 tsunami that destroyed part of the Tamil Nadu coast, killing thousands and displacing thousands more. In 2010, I brought the ashes of my mother from the Philadelphia suburbs to the banks of the Adyar River in Chennai, where I placed them to become one with nature again.

While I have also experienced my share of good memories, including an incredible pilgrimage to the Chidambaram Nataraja Temple in 2002, and visiting my dad's ancestral village of Kodumudi in the early 1990s, I never felt truly at peace in India.

That changed two weeks ago, when my wife and I went to Chennai on a short trip. During the visit, we had the chance to see the Arulmigu Kapaleeshwarar Temple in the Mylapore district of the city. The temple, dedicated to Lord Shiva and the Goddess Parvati (in the form of Karpagambal), is a living vestige to an often forgotten part of Indian history and a testament to Hinduism's resilience. 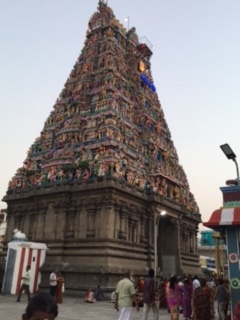 As we walked through the temple and visited the numerous deities, I felt a comfort level in India I have never felt before. It was the sort of spiritual re-centering I never thought I would find, even as my numerous past religious pilgrimages to different temples throughout India brought me fleeting moments of peace. At the Kapaleeshwarar Temple, I felt overcome with bliss, tied to both the temple's spiritual energy and my cultural roots as a Tamilian. To me, this was home.

The story of the temple is analogous to Hinduism's story. Built in the early common era by the Pallava dynasty, the temple stood on the banks of the Indian ocean for nearly seven centuries. However, when the Portuguese took over parts of Tamil Nadu, they destroyed the temple (and many other Hindu houses of worship from previous eras) and used parts of the old temple's foundation to build the San Thome Basilica (St. Thomas Cathedral) nearby.

In the 16th century, however, the temple was rebuilt by the Tuluva Dynasty, and some of the original temple's foundation remains part of the current structure. Its physical resurrection (though more inland than the original temple) embodies the evolution and rejuvenation Hinduism has undergone over many centuries. As I stood on the temple grounds with my wife, watching the sun set on the temple pillars, I couldn't help but notice the generational diversity of the worshipers: old women offering their evening prayers, and college kids socializing in between visits to the individual deity shrines.

In recapturing the community space envisioned by the temple builders so many centuries ago, Kapaleeshwarar temple allows visitors to connect to the divine in their own way.

In the weeks since my return from Chennai, I still feel the warmth and bliss from my visit to the Kapaleeshwarar Temple. To me, it's a reminder that sometimes we find our spiritual center when we are least looking for it. Lord Shiva was generous enough to help me get there.