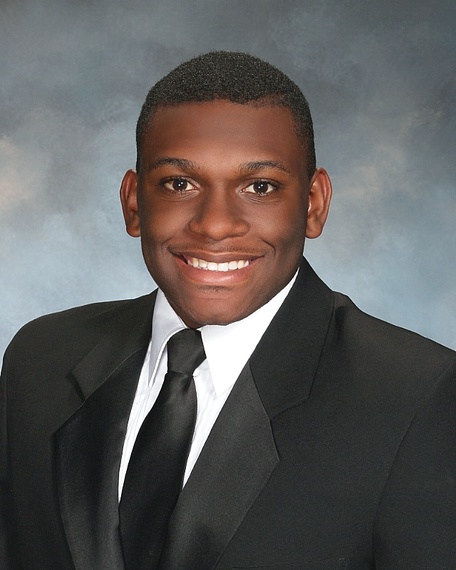 When I was 5, my older cousins called me "Little Satan." I loved jumping off high places and climbing in laundry baskets. Yet, my favorite was sliding down handrails wearing a helmet. But perhaps I should have been called little vampire. I would sink my teeth into walls, pencils, pens, and even people. I don't bite things anymore, but I strike with precision in fencing. My energy as a kid has been channeled into the power and speed that is critical in fencing. However, the real weapon is my mind.

I don't know if I would have made the transition from satan to vampire to fencer without the influence of my grandfather. Grandpa Riley was a leader everywhere he went. When I was eight, I was at one of my Grandpa's poker games. When he spoke, everyone stopped and listened. He told a captivating story about being with the first black Marine unit fighting in the Korean War. He entered his first battle and got shot in the arm. He continued to fight, and encouraged his fellow brothers in arms to fight on until they had to retreat. For the next Halloween, I got all my friends to dress up as the Power Ranger team so we could be heroic like Grandpa.

When I was nine, I was elected captain of my little league baseball team. I was intimidated by the job. Grandpa told me, "If you want to lead others, you must have a strong heart and not be scared of others." That helped me feel more relaxed, but didn't do much for my baseball skills. My brother was the home run hitter. I was a strikeout pitcher that could not hit a ball for the life of me.

Grandpa encouraged me to find a sport that would exercise both my energy and intelligence. Unfortunately, he didn't get a chance to see the change that came into my life once I found fencing. He passed away when I was in sixth grade. It was the darkest time of my life. Two months after my grandfather's death, my parents divorced. I had to leave behind all my friends in Central Islip, N.Y., when my mom and I moved to Howell, New Jersey.

The life that was falling apart came back together at camp that summer after sixth grade when I was introduced to fencing. It was amazing to learn the tricks in the air like in Pirates of the Caribbean. With fencing, I could learn how to swordfight properly. I moved to New Jersey with fencing as my new love and found a home at the Jersey Fencing Division, recommended by my summer camp coach.

Fencing helped me survive one of the darkest periods in my life. After winning my first tournament in eighth grade, I broke down in tears. I was happy, but I wished my grandpa was there with me. He would be proud to see my improvement over the last 6 years.

Now I am far beyond the dark period, but fencing has remained a strong part of my life. When I fence I am consumed with feelings of strength and courage. The sport also promotes my concentration and has taught me to take control of problems. When I am not fencing, I sometimes employ the breathing exercises to help me relax and get through any moments of sadness and anger.

I've been to two national tournaments and was recently selected to become the captain of my team's men's sabre and epee divisions. I have won 10 tournaments in the past three years. But I'm not done yet. I am determined to be nationally ranked and go to the Olympics. When I release myself in a tournament, I may not be Little Satan but I am a man for opponents to fear.

Justin Lowe, a graduate of Freehold Township High School, is a freshman at Sacred Heart University.