Bob Whitehill is very particular when it comes to particulates.

You know what particulates are, right? Suspended solids in liquid. They're those itty-bitty bits of matter that give sea water its unique color and clarity, which is why -- if you're trying to use CG to create believable H20 -- you need to load that faux fluid with lots of artificially-created particulates.

Which is just what Pixar Animation Studios did when they were originally producing Finding Nemo 10 years ago. With the end result being that this Andrew Stanton film did such a great job of simulating the look of the undersea world that it actually wound up winning the Academy Award for Best Animated Feature back in 2003.

Of course, that was for the 2D version of Finding Nemo. Eighteen months ago, when Whitehill and his Stereographic production team began looking at this film in earnest and tried to form a plan as to how they were going to refilm Nemo in 3D ... Well, that's when they learned that all of those tiny artificial particulates which Pixar's artists had previously inserted to give the sea a sense of authenticity were going to be a huge pain-in-the-butt to deal with.

"You'd take a look at a shot for Nemo that had previously looked just fine and then attempt to translate that image into 3D, and suddenly your field of vision is filled with all of this particulate matter. And because they got between the viewer and the characters on screen, these tiny free-floating flecks were very distracting," Bob recalled during a recent phone interview. 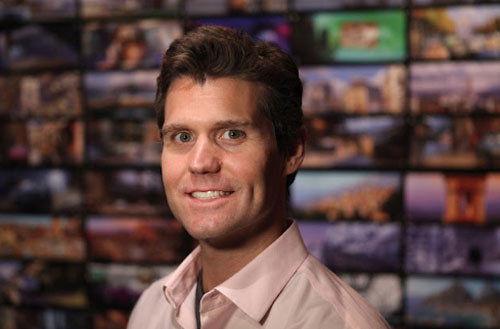 But even so, as problematic as this particulate matter was, it was also a key component of Finding Nemo's distinctive look. It was part of what the ocean seem so real, so alive in this animated feature. And Whitehill and his team were determined to deliver the same sort of rich, lush visuals to audiences who were seeing the 3D version of Nemo in 2012 that moviegoers got back in 2003 when they saw the original version of this animated feature in theaters.

"So, in order to do that -- we literally had to go through this movie, scene by scene. We looked at each individual shots and then decided which pieces of particulate matter were proving to be too distracting. And if we could then cull them out or move them to a different place on the screen without having a noticeable impact on the overall look or the mood of the shot, that's what we did," Whitehill explained.

Wrangling individual almost-microscopic bits of computer-generated murk may seem like a pretty bizarre way to spend a day. But Bob is virtually Hippocratic when it comes to converting Pixar's library titles to 3D.

"People know and love these movies. So we're not going to ruin their fond memories of those Pixar films by piling on unnecessary 3D effects," Whitehill stated. "Our approach to the conversion process is that we want the 3D to sort of become like the movie's score. It's never supposed to distract you. It's always there to support the story, to heighten the emotions of a particular moment."

And to make sure that the 3D version of Finding Nemo stayed true to the emotional tenor of the 2D version of this animated feature, Bob & his Stereographic team regularly consulted with the original director of this movie, Andrew Stanton.

"What was kind of funny was that we'd show Andrew some of our shots and then explain how we'd had to move a particular piece of particulate matter in order to get rid of a bit of visual distraction, make the scene look better in 3D. And he'd know the exact CG fleck that we were talking about," Whitehill marveled. "Andrew could remember -- when they were originally putting together the 2D version of Finding Nemo -- how they'd put that particular particulate in place so that the sea Marlin & Dory were swimming in would look just right. So it would provide the proper mood & setting for that moment in the movie." 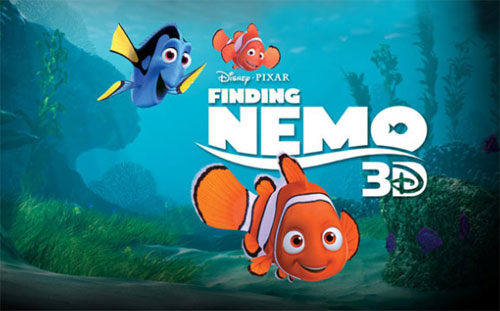 Which -- I know -- sounds kind of strange. But think back on that murky, somewhat sinister stretch of ocean that Marlin and Dory were swimming in right before they were swallowed by that whale. Or that bright, clear patch of blue water Marlin and Nemo were hurrying through as they made their way to Mr. Ray's class. You then realize that the clarity of the water in this movie really did kind of serve as scenery for these characters. That the fluid environment that they were moving through did have an enormous impact on the overall look and feel of Finding Nemo.

"And wait 'til you see how 3D really enhanced the wonder of when Mr. Ray takes his class to the Drop-off. Or the tension that the audience feels when Marlin & Dory are hanging on for dear life inside of that whale's mouth," Whitehill said. "It's at moments like these when dimensionality can really heighten the tension and emotion in a scene, enhances the storytelling."

And clearly there must be something to what Bob is saying. Given how audiences turned out en masse this past weekend to see Finding Nemo 3D. The new stereographic version of this Andrew Stanton film was No. 2 at the box office this past weekend with domestic tickets sales of $16.6 million. And the critics clearly approve of this 3D redo of Nemo, given that the movie wound up with a 99 percent Fresh rating over at Rotten Tomatoes.

Now you'd think that Whitehill and his 3D conversion team will be thrilled with that sort of positive reception. But -- to be honest -- they don't really have time to be thrilled. You see, even as Bob & Co. were buttoning Finding Nemo 3D, there was still stereographic work that needed to be done on Pixar's "Brave 3D." Not to mention next summer's big theatrical release, Monsters University. Or the next Pixar library title to receive the 3D treatment, 2001's Monsters, Inc. (which roars into theaters December 19th).

"While doing the conversion process on Monsters, Inc., we've kind of traded culling the particulate matter out of sea water for shifting snowflakes. We've had to do some adjusting of those scenes where Mike and Sulley are stranded in the Himalayas, making sure that the snow which is falling in some of these scenes doesn't distract the audience, unintentionally pull them out of some pretty important moments in this movie," Whitehill said.

Mind you, it takes a lot of extra effort to take Pixar's older titles like Finding Nemo and Monsters, Inc. and then re-film them in 3D due to the many changes that this animation studio has made to its rendering software over the past decade. But Bob believes that the end result is worth it.

"Every time we show someone new the 3D version of that moment from Monsters, Inc. where Mike, Sulley and Boo are riding that door back into the hangar, and the camera then pans around this enormous space where there are hundreds of thousands of doors being stored, there's this audible gasp from the viewer. That extra layer of dimensionality takes what was already a memorable moment in that movie and then makes it a jaw-dropper," Whitehill enthused. "In the 3D version of this scene, the stakes seem so much higher. You now get a sense of how truly huge the Door Hangar is. Which makes Mike and Sulley's quest -- to find Boo's specific door and then get her home safely -- seem that much more impossible."

And when you listen to how excited Bob gets as he talks about working on individual scenes in these new 3D versions of Pixar's library titles, you then realize that he's not just some technician assembling years-old data files into some computer for the conversion process. Bob Whitehill is actually a storyteller/preservationist who has tremendous respect for the original material -- and he does everything that he can to make sure that the 3D version of much beloved movies like Finding Nemo and Monsters, Inc. look just as good as you remember them. Only now these Pixar films have the added, emotion-enhancing component of dimensionality, which -- in the case of Finding Nemo 3D -- adding depth to the Depths involved the slow, painstaking process of moving one piece of computer-generated particulate matter at a time.

Jim Hill is an award-winning entertainment writer who lives in New Boston, NH. Over the past 30 years, he has interviewed hundreds of veterans of the animation and themed entertainment industry and written extensively about the Walt Disney Company.