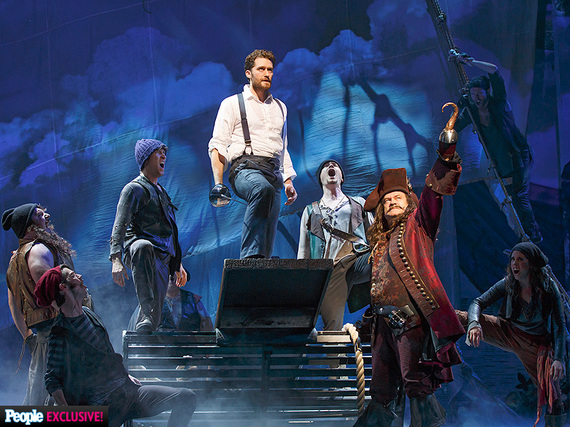 As someone who once thought he'd spend his career writing about the stage (instead of film), I don't get to see nearly as much theater as I would like.

So I gladly accepted an invitation to see Finding Neverland, which opened last week on Broadway, in order to write about it.

(Full disclosure: Finding Neverland is produced by Weinstein Live Entertainment. I'm currently finishing a documentary that was funded by the Weinstein Company.)

Directed by Diane Paulus, the musical is based on a 2004 Oscar-nominated movie, about the playwright J.M. Barrie, who wrote Peter Pan. It's 1904 and Barrie (Matthew Morrison) has just opened his latest play -- which everyone agrees isn't as good as his previous ones. His American producer, Charles Frohman (Kelsey Grammer), assumes it's just a fluke, that Barrie's next will be a hit -- because he needs it to be.

Barrie, however, isn't so sure. He feels trapped writing the same drawing-room comedies -- but it takes an encounter with a group of children for him to begin to see his true path. The children -- sons of an ailing widowed mother (Laura Michele Kelly) -- spark his imagination in ways it hasn't been tickled since childhood.

Which is, of course, the key: getting in touch with his inner child to learn once more how to play. What better way than to create a character -- Peter Pan -- who refuses to grow up?

The script, adapted by James Graham, pits Barrie's creative struggle against his personal life, with a status-hungry wife who doesn't understand why her husband is playing with children and spending time with the kids' widowed mother. It's socially unacceptable in post-Victorian London. Meanwhile, according to Frohman, it's professional suicide to present a play about fairies, pirates and a boy who won't grow up. But, as one of the songs notes, you have to "Believe."

The staging, by Paulus, is never less than imaginative, with a set by Scott Pask that seems to fold and unfold, creating everything from a London park to a posh dining room to a hellish dream sequence. Paulus has a solid cast, led by Morrison and Grammer, both of whom know their way around a punchline (and a song).

If the choreography seems more athletic than artistic, if the music feels a bit recycled (many songs sound like tunes from other shows, slightly revised) -- well, that didn't seem to bother the audience full of parents and children with whom I saw the show. If Finding Neverland isn't a brilliant musical, it's still an entertaining one, using all sorts of stage legerdemain to entrance an audience looking for good old-fashioned Broadway magic.