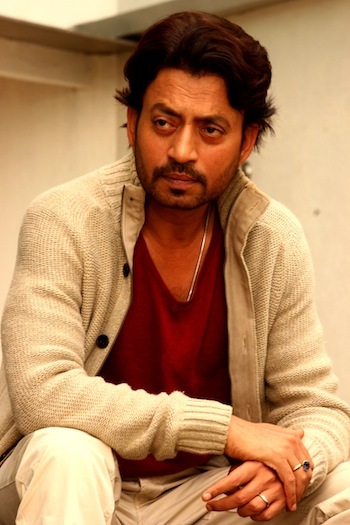 Anyone who has ever been to India doesn't need me to explain the incredible, mystical vibe of this great country. But to those who have yet to journey there and experience its beauty, its undeniable magnetism, its incredible culture and its depth of spirituality, I suggest watching an Irrfan Khan film. Any Irrfan Khan film. Because Khan represents more than any other human being the absolutely magical soul of his home country.

But Khan is also a world-renowned, much sought after actor in Hollywood, with cameos and starring roles that have taken him from Michael Winterbottom's A Mighty Heart, to Danny Boyle's Slumdog Millionaire, to The Amazing Spider-Man. And who could ever forget his touching, unforgettably moving performance as the father Ashoke in Mira Nair's beautiful cinematic tale of non-belonging The Namesake.

Lately, Khan has been celebrated for his role in Ang Lee's Life of Pi, where he plays the adult Pi Patel, but also narrates the story in a way that leaves the audience breathless. And he stars in Ritesh Batra's The Lunchbox, which in my very humble opinion should have represented India in the Foreign Language Oscar race. If you were in Cannes this year, there wasn't an event or a screening you could attend without hearing Khan's name being praised for his tender performance.

Khan is at this year's Abu Dhabi Film Festival with his latest role in Qissa -- that of Umber Singh, a somewhat less than likable Sikh father on paper, who becomes vulnerably moving and unbelievably understandable on the big screen, thanks to Khan's performance.

Sitting across from Khan in Abu Dhabi proved to be a nearly surreal experience. We sat in a spot that was in the middle of all the film festival action, yet thankfully security was informed to keep his numerous fans away and we chatted as if in a room away from it all. That's because Khan is that magnetic, sultry-voiced, deeply intelligent man he appears to be in his roles. He's actually all that and more. More generous, more humble, more insightful and definitely, even more handsome.

You've managed that elusive "crossover" status that most actors aspire to, working in both world cinema and Hollywood. Did you set out to do that in your career?

Irrfan Khan: That's what the great quality about this life is, it's surprising. And also about this field, storytelling... I could never control my destiny. I tried to plan things, I tried to organize, I tried to go in a particular direction but somehow I could feel that destiny is nudging me towards other directions. My only contribution, my only responsibility in this career could be -- I'm still not sure -- that I took those signs that life gives. I allowed myself to be nudged by some force I don't know yet.

This could become a long conversation about destiny and whether we contribute to our lives or just fulfill a master plan. Do you feel you were always destined to be an actor?

IK: I think there is a kind of free choice, the reality could manifest either way what you do, you take, what choices you make. But there is a kind of direction which destiny wants you to take, so you sometimes don't interfere. It's very enigmatic, it's a mystery. You have to find your own truth and one truth cannot be the complete truth. For everybody, their truth will be different.

So what is the truth for Irrfan Khan?

IK: That I didn't interfere. I was sensitive about in which direction destiny is trying to push me, my only thing is that I strongly desired to enjoy it.

Are you very careful about the roles that you pick, particularly because you represent an entire country to the rest of the world?

IK: When I pick a role it's not in the back of my mind whether I'm representing my country or not. Even if I was not representing India, I would have chosen my roles in a similar way. Because first, I have to be engaged. That's the primary thing, first and foremost. And that's it. That's the only thing I think of when I choose a role, that it should work for me.

And what makes a role interesting to you?

IK: Is there something hidden that I want to explore, is the role allowing me to see a new world, do I see a possibility of exploring a new dimension within the character that I don't see? Sometimes you think about a part and you have a particular point of view about the part but then the director comes and he has his own vision about the story and that could be very interesting for you to explore, this new way of looking at things. And how you bring yourself to his world and you contribute to his vision, sometimes you completely submit, sometimes you don't. Sometimes you want to retain your point of view, it's all chemistry between you and the director.

What you experience, that journey within the film, do you also think you bring the audience along with you?

Do you think of that wonderful power when choosing a part?

IK: That's the only precious thing about this job. Fame and money is one thing, but that can leave you very empty after a point. What stays with you, what makes you feel good about being in this profession is that there is a kind of sharing between you and the audience. And maybe the audience doesn't know your language, isn't even aware of the country that you live in but when they see your film and your experience becomes their experience then they stay with that for years and years. That's something very very special about being in this profession.

Do you set out to educate through your films?

IK: Basically you are not intending to teach, basically you are intending to learn. You're just learning things and doing things and what that is doing to the audience is up to the audience. Think about this, a film is going on in the theater, it could be the masterpiece of the world, and the theater is empty. The film itself is dead if there is no audience. It is, because there is nobody to look at it, it's like God didn't create human beings and this whole universe is going on and there is not way to reflect, and enjoy it.

So you believe the audience is really a part of the film.

IK: Yes, it has to be, otherwise a film is dead.

Do you think it is necessary for an actor to work outside their own country?

IK: It's a very important experience, it's an enriching experience, because a person who is a Kurdish director who is making a story, he has a different point of view...

Like Hiner Saleem from My Sweet Pepper Land. Would you work with him?

IK: Oh, I would love to. I think India needs that kind of film right now, to redefine what commercial cinema is all about. Which was there earlier in our films. That's the interchange of these minds, these sensitivities, it's very very important to enrich yourself. Even for the director. I don't know when Ang Lee directs Indian actors they have their roots in their own culture, they are coming from a different culture, Ang Lee must also be learning something about that culture... So it's an interchange.

Do you think an event like the Abu Dhabi Film Festival is helping to create these more global partnerships in cinema?

IK: It's a very strange thing. Yesterday I was wondering about the function of this festival. What this festival is all about, is this an exercise to showcase or do a PR of this city? I was just wondering, there is Formula One happening, the football match happening, there is some concert happening and also a film festival. But then I started talking to other people and I came to know that My Sweet Pepper Land is a product of this festival [the film was a SANAD fund recipient in pre and post production]. I was so pleased! I was so pleased to know that it is creating a kind of atmosphere for filmmakers and that's so great, so good. I was really concerned because it depresses me if I see that a film festival is just a showcase of PR of the city and ADFF is not. I discovered that.

Wouldn't it be great to have Irrfan Khan starring in the next My Sweet Pepper Land?

IK: I'd love to. It would be the most interesting thing in my life if that happened. To work with these kinds of directors. Why this interchange of cultures and sensibilities is important in today's time is because people are trying to make the world standardized. That's why we need more exchanges of these different sensibilities. So that everything doesn't become similar, culture shouldn't be abducted and forced to adapt to another culture. People should be able to connect to their own culture.