Under the EU-Turkey agreement and Greek refugee return law, refugees are quickly being deported. There is a backlog of refugees trapped in Athens, anxiously awaiting eminent deportation and who are in need of immediate care. The camps impacted and the national economy in crisis, Greek people have taken it upon themselves to fill in the gaps where international volunteers cannot manage. Massive restaurant-sized pots are filled with soup and sometimes spaghetti to serve for dinner to the multitudes sleeping on cold asphalt in the city squares and the port. Churches open their doors for breakfast while the community and international volunteers take on supplying, cooking and serving meals. Not the organizations, the Greek people and the international volunteers needed an invitation to act.

The sprawling campus of an abandoned school on the island of Lesvos serves as a longterm (18 months) camp for vulnerable refugees: elderly, disabled, and those with mental health issues unable to continue the journey to Western Europe. Pikpa Camp was established by the initiative of The Worldwide Tribe. These volunteer heroes fought the government for purchase of the land, paid for with fundraised Euros. They live with those they serve, eating meals prepared by the kitchen, sleeping in tents, showering in communal bathrooms and toughing out the freezing snow conditions and eminent squelching hot summer months.

Arthur Ashe described true heroism as, "remarkably sober, very un-dramatic." We met those sublime heroes in Serbia who work for the non-profit national organization, Praxis. Risking their lives daily, they rescue unaccompanied refugee minors directly from the hands of smugglers and spend upwards of two days camped out at police stations helping unaccompanied Afghan minors obtain new identification documents after they've been robbed by the Serbian mafia. Every night they wait in negative temperatures for trains carrying refugees to come into the Belgrade central. Swiftly directing refugees off the trains to safety before they can be coerced into giving their money to corrupt taxi drivers. The brave employees of Praxis Serbia did not receive orders to put their lives in danger for those they were hired to help. They do what they do because they recognize this dire situation is not about a job or relieving their country of an unwelcomed phenomenon. The situation is about humanity. 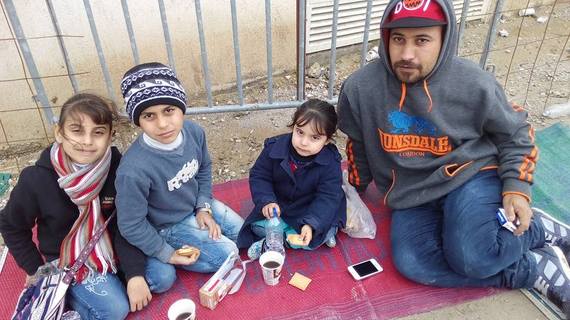 On the border between England and France, an unofficial camp of 9,000+ refugees representing 20 nationalities has been dubbed the Calais "Jungle". The living conditions are something out of a developing country. The ground is a mix of mud and running sewage while rats feast on endless piles of trash. The UNHCR does not operate here. In fact, the only active international organization we came across was Doctors Without Borders (MSF). Volunteer French doctors serve thousands, administering vaccinations as soon as there's an outbreak. Jungle refugees rely entirely on initiatives run and staffed by volunteers: the warehouses of L'Auberge Des Migrants/Help Refugees, the women & children's center, the library, Calais Kitchen, the legal aid and youth centers. In April, French courts ordered the entire southern area of the Jungle to be leveled with bulldozers, displacing thousands. These volunteers were the voice of the voiceless when the bulldozers appeared, unannounced in the early morning hours. It is the volunteers that document unjustified police brutality against young refugee men. In the midst of these compounded atrocities, it is the volunteers that continue sorting and distributing hundreds of clothing donations, preparing 1800 boxes of food staples and cooking 2000 hot meals daily for distribution in new unofficial camps sprouting around the city. None of these volunteers are sponsored to be there and none received an invitation to help.

The refugees are wholly sustained by the efforts and sacrifice of volunteers and donors from around the world, ordinary people who see themselves in the refugees. It is these heroes who do not wait for an invitation to help. They listen, show daily care, and give hope for those who are losing the will to continue the now seemingly impossible journey. You could be one of those people.

Take your skills, your concern, your kind heart and challenge yourself to help. *Everyone has something to offer. Can you build? You're needed. Can you cook? You're needed. Can you sew? Can you read or entertain children? Can you sort and/or distribute clothes? You're needed. You're needed! If you can't make the trip yourself, then there are honest people, who without putting a dime in their pockets, use the money to directly purchase needed supplies. Can you hold a fundraiser from where you are now? What are you waiting for? It is in our shared humanity that solutions are found.

*If you are interested in volunteering abroad to help refugees or to make a donation, please send an email to laborandhope@gmail.com.