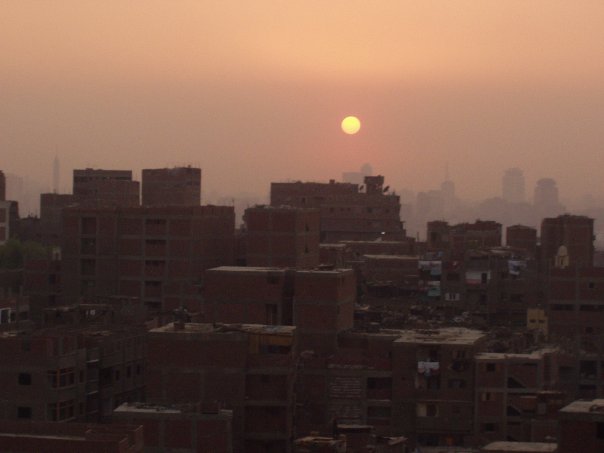 As I was walking home one day in Manhattan, I passed by a woman digging through trash with her two children. They were collecting recyclables for money. It reminded me of my two month stay in Cairo where I witnessed a young girl digging through a pile of used diapers, syringes, and decomposed food with her bare hands in search of anything that would translate into something valuable. That was in Mokattam, a so-called "garbage village" on the outskirts of Cairo. The fact that there are children who are so desperately poor is one of the very reasons why we need to help people help themselves. My experience has shown to me that even in a developed region like New York City, you will find traces of extreme economic inequality, just like in Cairo.

Many people may not be aware, but since 2006, New York City has developed a strategic plan, called Plan 2030, whose purpose is to drastically improve the physical infrastructure and environmental quality of life in the city over the next quarter century. Among the goals is a drastic improvement in the environment through the implementation of sustainable methods of waste disposal. Doubtless, we have the technology and the will to make that happen. But I hope that for the sake of people like the ones I saw rummaging through trash that New York takes into consideration the informal economy and people living on the margins.

In Cairo, there are three channels of waste collection and treatment. Approximately one third of the city's trash gets disposed of by each method. The first channel consists of either pickup by private companies, or, in low income neighborhoods, the usage of waste pooling sites that are operated by the Cairo Cleaning and Beatification Agency (CCBA). The second channel is the informal collection by traditional collectors called Zebaleen (door to door). Lastly, one third of the city's trash is simply dumped, uncollected, on streets and empty lots. Among all three channels, the Zebaleen are arguably the most efficient, recovering 80% of the waste that they collect. The residual 20% is transported at their own expense to the government dumpsites.

In Cairo, there are approximately 40,000 people living in five neighborhoods who are engaged in the collection, transport, recovery, and recycling of waste. These people are extremely poor and have traditionally been ignored by the government. They collect trash to survive, but it actually benefits the public: trash collection is done at no cost to households or the government and it results in a cleaner, safer environment.

The Zebaleen success is the result of the efficient but gruesome process of sorting through raw trash. The manpower of over 40,000 people sorting through raw trash increases their capacity to extract value from the trash. According to the consulting firm, Community and Institutional Development (CID), the net benefit including environmental impacts in the informal sector is L.E. $127,179,210 as opposed to L.E. $17,576,151 in the formal sector. The environmental benefits of the Zebaleen waste recovery and recycling system include: uncontaminated organics sorted for the production of a higher grade compost; production of new material from existing ones; decrease in amount of land being used as unsanitary landfills; protection of the air from the uncontrolled burning of garbage; and recovery of 80% of the materials disposed by city dwellers. These benefits are not without a human cost. The families are constantly exposed to trash; in fact they live in the trash.

The garbage collector's day begins at the break of dawn when he makes the trek with his donkey cart or truck from the outskirts of Cairo into the city maneuvering his way through traffic and terrible road conditions. After his daily pick-ups, he returns home where the trash is sorted by his family. The family separates it into piles of recoverable items such as plastic or rags from organic material such as food. Next, the recoverable items are sold to middle men who have capital to process the material. For example, some members of the community own machines that melt plastics and shred paper. The processed raw materials are sold to enterprises that have the capacity to develop the material into products such as placemats, stationary, and other products.

The Zebaleen case is a unique example of how a waste management program can have a positive impact on social welfare and community development. That is because they have received help from organizations such as the Association of the Protection of the Environment (APE), a non-government organization established in 1984 to improve the lives of garbage collectors. It is run by a 9 member board of trustees, a staff of over 50 and scores of volunteers drawn from various fields of special interest.

Mokattam has become a stable settlement with a clinic, a church, shops, barber shops, cafes, and restaurants. Additionally, community based organizations have improved the infrastructure of Mokattam. For example, they have installed wastewater systems, paved roads, and built schools. Income generating projects for girls and women were also implemented. Through APE, women have been taught valuable skills that give them the opportunity to work and excel in favorable conditions making rugs, handbags, and stationary from recycled material. They are also taught principles of personal hygiene, how to read, and how to run a business. Children have the opportunity to learn how to use a computer in the computer lab. APE has also helped the Zebaleen develop cleaner ways of sorting garbage with the help of a group of professionals who volunteered their time for the development of the compost plant.

My encounter with the woman on the street in Manhattan was not the first time that I have seen individuals sorting through trash in the city. Only this time, I actually paid attention. There needs to be more attention directed towards individuals who are trying to help themselves. As New York City embarks on Plan 2030, it needs to revisit the informal economy and not simply ignore it.