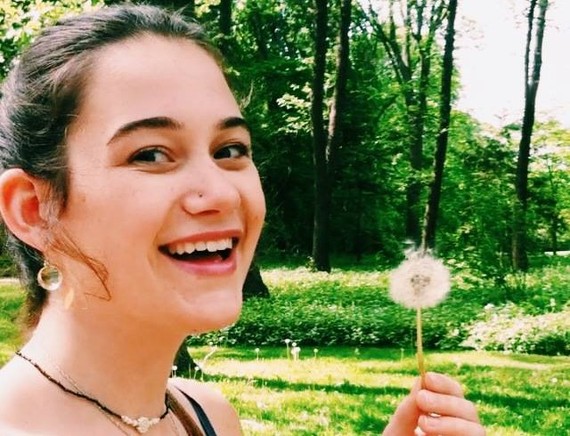 This was the moment I had been waiting for all night. It was three in the morning and I was finally home after a long double shift at TGI Friday's. I ripped off my stained shirt and lay on my back on my bedroom floor. Whenever I couldn't fall asleep I'd always stare up at my ceiling and watch back the day's events as if it was a movie projected above me. I stayed up all night obsessing about things I wished I could change.

Why does nobody listen when I ask a question? How come I clean everyone else's tables and nobody does the same for me? Why is it that I always bring the food out on time and still make measly tips?

I have always been a chronic over-thinker, picking apart everything that happens and imagining future scenarios to prepare myself for what could happen. That is one of the reasons I joined a program at Florida State University where I spoke openly with other young people about our futures, big life choices, purpose, and many other topics that were burning on our minds. These conversations had alleviated some of my anxiety about the unknown. But now, months after my freshman year of college and near the end of the summer, a lot of the inspiration from those weekly meetings had worn off.

When I first got hired, I poured over the menu and was certified faster than the other new hires. I showed up early to every shift with a clean uniform and a slick ponytail. But sooner than I thought, the feeling that what I did mattered was beat out of me. The daily grind of being on my feet for ten hours straight, putting on a smile for objectifying old men who'd call me "sweet cheeks", and coping with demanding managers completely crushed my go-getter spirit.

Unlike my previous part-time jobs, I stopped being concerned with making friends. I wanted to fly under the radar, earn my money, and get the hell out of there in four months. Every time I broke something or I messed up an order, I would remind myself, "I'm not going to remember any of this in 20 years" or "one day I'll be successful and this won't matter", and then I'd continue begrudgingly doing my job.

It was a mindset I adopted from watching movies about high school that exaggerate pointless minutiae. I didn't want to get lost and caught up in my own life like those characters. I wanted to see "The Big Picture" that I had been encouraged by friends and mentors to explore. I wanted to believe that my existence consisted of more than just this humiliating chapter. I was banking on an unguaranteed future that would make everything worthwhile instead of finding worth in what was already happening. I was missing the chance to be present and to enjoy being 19 years old with nothing to lose. Because I treated this job as a meaningless blip in my life's timeline, I quickly became detached and apathetic.

I'm not sure how people do it day after day. Paula, a coworker in her 60s, has been serving since before I was even born and she trained me when I first got hired. It made me anxious that she was always watching over my shoulder and scolding me when I didn't do something exactly right. She was very direct and I figured working at this place forever had made her callous. I was afraid of disappointing her, so I resulted to avoiding her. Though, as the weeks dragged on, dodging interactions with Paula became impossible and I found myself studying her ways. I had pegged her for this fed-up individual, but I came to find that I've never misunderstood somebody so much in my life.

She treats the other long-time servers and every customer like her own family. I noticed how much she loves her job, how in her element she is being the matriarch of all this chaos. She keeps everyone in line and masterfully handles every catastrophe. It didn't make sense to me. How can somebody who has been stuck at the same dead-end job, doing the same thing for decades, still smile? Is she just wired differently than me? I had to get to the bottom of this.

I caught her over near the soda fountain, her back was slumped and her head was buried in her hands.

"Are you alright?" I timidly stood next to her.

I found her in these rare moments only a few times. And every time she started to crumble, she'd build herself back up again before I even had time to speak.

"Never mind that," she said, collecting her thoughts. "Table 22 needs a refill on Diet Coke."

I overheard some servers saying later that day that at the beginning of the summer her son had died of a heart attack and that she hadn't been the same ever since.

It is scary how easily I could have skated through my employment in my own bubble. How I would have never been aware of her immense heartache because I wanted to keep to myself. How could I purposefully distance myself from the individuals whose lives had crossed with mine?

When I glanced over at Paula, a woman who despite immeasurable grief has to answer questions about appetizers every day, it finally clicked for me. Her big picture isn't self-involved; it isn't the outlook of the broader scope of her own life. It isn't her own dreams for the future that propel her forward.

Paula sees her job as means of connecting with people, not just a means to a paycheck. When she has a bad day, she isn't visualizing, like me, a time when things will be better in her own life to help her get through the present. She focuses on all the other people that also have stresses and fears and the quality of her experience is contingent upon how she can make someone else's experience better. Every day she decides to put what is bothering her aside in order to take care of another.

She lets everything, all the beauty and terror, happen to her. She doesn't let unexpected hiccups discourage her or keep her from providing the best service. She sees herself as a piece of the whole, a necessary cog in the machine of the restaurant. I recognized I had been treating my work as something that would result in only self-benefit without seeing the bigger picture of what I was a part of and contributing to.

When I started emulating Paula's spirit, I not only made better tips, but every shift felt more enjoyable. All of the little slip-ups stopped bothering me when I lived in the present and focused on how I could improve somebody else's day. Every meal I delivered, every person I interacted with did matter. So why would I invalidate this experience just because I knew it was going to end soon?

I had been treating the topic of "The Big Picture" as something so singular. I saw it as separate from the other matters my peers and I discussed during my time with The QUESTion Project at FSU. We had also explored "Choice", "Purpose", "Fearlessness", and "Interconnectedness", but for some reason I tackled these subjects independently instead of perceiving them as intersecting discoveries that altogether amount to a more conscious life. Learning from someone who embodies the spirit of all these topics allowed me to see "The Big Picture" as more of an all-encompassing cornucopia. This big picture shouldn't only be the conviction that life is long and "it gets better".

When I valued all of my experiences as a server, even the difficult moments, my big picture became the acknowledgement of how interconnected we all are, how small choices are still influential, and how fearlessness is more than just taking personal risks. It wasn't until I saw firsthand a more selfless way of thinking that I understood how every event and interaction contributes to something greater. My discussions with The QUESTion Project at Florida State University armed me not only with a knowledge base and network of thoughtful people, but with a desire to be more self-aware, which helped me develop the flexibility to change my view of the world and to see the bigger picture more clearly.

During those many sleepless nights, I envisioned the movie scene on my ceiling of what my final shift would be like. I dreamed of throwing all the tables over and storming out the door screaming expletives. But when the day actually came I couldn't imagine ever doing that.

Paula was busy loading up the dishwasher. I walked up to her and for the first time I didn't overthink what I was about to say.

"Today's my last day. Thank you," I muttered, "for everything."

She simply nodded her head before she darted away to carry a full tray back out to the floor. I knew then that Paula's not looking for recognition. She's already done her part with me and she had countless other people now depending on her.

I inhaled, categorizing this moment as a deeply meaningful blip in my timeline. I took off my apron and walked out the front doors into the setting August sun. And just like that, what had felt unbearably long was over just as fast as it had begun. I was glad I gave importance to this small chapter as I stepped into my next one, ready to continue questioning and redefining.

After I left it was somewhat comforting to think that the restaurant wouldn't change much. There will always be the same regular customers at the bar. The same dinner rushes and organized mayhem. The same narrow-minded college kids trying to save up money.

Paula will still be there making sure everything is running smoothly. Every time someone's life intersects with hers, she'll still selflessly share her own version of "The Big Picture".

I only hope that one day I'll be able to do the same.