Something quite amazing happened on October 15, 2004. Comedian Jon Stewart appeared as a guest on Crossfire between co-hosts Tucker Carlson and Paul Begala -- ostensibly to promote his new book -- but, as Rob Corddry (one of The Daily Show's fake correspondents) subsequently revealed, one of the reasons Stewart was a bit grouchy that day was because he had not had anything to eat.

After Stewart took his co-hosts to task by saying "You have a responsibility to the public discourse and you fail miserably," CNN decided to cancel Crossfire. Not only did its CEO, Jonathan Klein, decline to renew Carlson's contract, Klein confessed to sympathizing with Stewart's opinions.

In a brilliantly written piece of satire entitled "Let Me Explain Why Miley Cyrus' VMA Performance Was Our Top Story This Morning," The Onion pretty much laid waste to CNN's management. As well it should.

Those of us who remember CNN's debut in 1980 are already wondering if Al Jazeera America will lure away audiences who have grown sick and tired of all the shouting matches between egomaniacal pundits that currently dominate cable news. Media critics are falling all over themselves trying to guess what kind of impact Al Jazeera America will have on the cable news industry. Think about it:

Looking for more new paradigms? Washington Post movie critic Ann Hornaday's concisely-written Eight Lessons From Summer Movies should be required reading for anyone who can't figure out why box office returns are failing to match industry expectations. And, in his recent speech at the Edinburgh Television Festival, Kevin Spacey went out of his way to remind industry people that audiences are not stupid.

All too often one encounters bloated films and theatrical productions which began as a good idea but metastasized into a toxic mess. These disappointments might have been due to:

All of this begs the question: When is enough enough? And, conversely, what happens when a writer has too much good material for one dramatic project?

In some cases, the writer ends up self-publishing an e-book or creating an independent film. In others, he cedes artistic control to producers, directors, and other influences until too many cooks end up spoiling the broth.

Two recent low-budget productions demonstrated the trickiness of trying to wrestle a complicated story filled with complex characters into a manageable format that can hold its audience's attention while keeping to a reasonable time frame. One was written, produced, directed, and performed by one man. The other was much more of a team effort.

Ever since 2008, when Don Reed brought his one-man show entitled East 14th: True Tales of a Reluctant Player to The Marsh, Bay area audiences have been eating out of the palm of his hand. A talented stand-up comedian, impressionist, writer, dancer, and actor, Reed's one-man shows describe his hilarious adventures growing up between the strict Oakland household in which his stepfather was a Jehovah's Witness and his other home in Oakland, where his daddy was a pimp with a great collection of hats. Lucky: The Irish Pimp is a short film that Reed wrote, directed and starred in:

In November 2011, Reed was performing Kipling Hotel (a monologue about his years in Los Angeles) at The Marsh during the period when his mother was dying. By the time I saw Kipling Hotel, Reed had added an extra 45 minutes of material to the show's announced running time of one hour and 40 minutes. In my review, I wrote:

"In order to include as many colorful characters and moments as possible, Reed has thrown so much into the creation of Kipling Hotel that his show is suffocating under its own weight. Long after the evening could and should have come to a reasonable conclusion, Reed was still onstage performing impressions of Sammy Davis, Jr. and E.T. the Extra-Terrestrial as he struggled to find an ending. If Reed could bring himself to cut the entire segment of the show about his adventures after his career started to take off, he'd have a much stronger and more clearly-focused monologue. In its current form, Kipling Hotel needs the kind of brutal cutting that is often difficult for an artist to perform when the material is about his own life. Reed can rest assured that he has plenty of material left for a third show devoted to his impressive career."

Reed recently debuted that third show at The Marsh before a devoted audience that adores him and loves his work. Although billed as "a prequel-plus," Can You Dig It? suffers from the same problem Reed faced with Kipling Hotel: the need for a director who can insist on cuts being made with a combination of surgical precision and clinical objectivity. 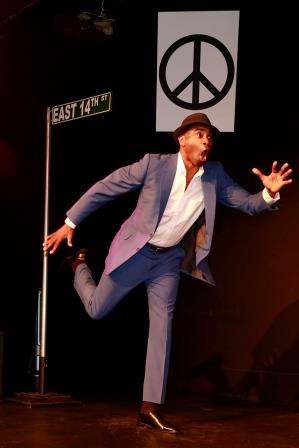 Can You Dig It? takes the audience back to Oakland during the 1960s, when Reed was a compulsive blinker, flashy cars were status symbols, and the Black Panthers were new to the neighborhood. As he imitates his peers, his older brothers, and other characters from his childhood, Reed is on sure footing talking about people he loved very dearly for a long, long time. Much of his material is quite wonderful, and Reed "sells" it to the audience with the skill of someone who has told these stories over and over to great effect.

Mae West has famously been quoted as saying that "Too much of a good thing can be wonderful." Alas, not always. Especially when your audience can start identifying numerous moments when a show could have ended on a high note but took a deep breath and decided to keep going.

Late in his show, Reed was again struggling to find a way to wrap things up. But this time he let slip a little piece of personal information which may be the key to solving the mystery of what ails his monologue.

If I heard him correctly, the 53-year-old comedian mentioned that his grandmother, his mother, and his two brothers are now dead, indicating that he may well be the sole surviving member of his nuclear family. That could explain how staying onstage -- telling one more story, and then another -- has turned into a way for Reed to keep their memories alive. While the catharsis may be therapeutic for him as a man, its lengthiness is weakening his show. 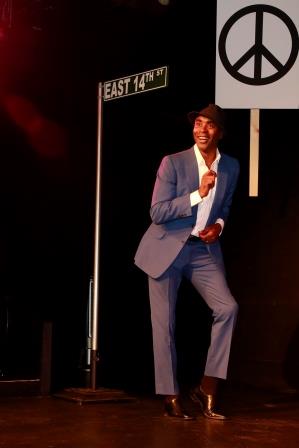 Can You Dig It? -- The 60's Back Down East 14th offers audiences a chance to revel in the music and dance moves of the 1960s as well as the wonder of growing up in a tug of war between the musical influences of The Beatles and James Brown, the dance influences of The Jerk and The Watusi, and the counterculturalism of the hippies and the Black Panthers.

Since Jordan had already paid for their vacation to Niagara Falls, he can't bring himself to throw away the tickets. After arriving in Toronto, where he plans to crash with his sexually compulsive friend Dandak (Vik Sahay), a series of misadventures causes Jordan to cross paths with Julia (Emily Hampshire), an attractive stripper struggling to cope with a huge amount of acquired debt.

Jordan may not know much about human psychology and/or sexuality, but he quickly sees a way to barter his accounting skills with Julia for lessons in how to talk and make love to women. As their friendship grows, it's difficult for him to avoid the overwhelming guilt he feels about leaving Rachel. But that may actually be the least of his problems.

"Comparing surpluses and deficits is simple when dealing with apples and apples, at the exclusion of all else. But when we start trading favors for affection, paying money for simulations of sex, or doing good deeds in the hopes of some kind of karmic return, the calculation becomes more complex. This is the thematic material that I was most interested in exploring in this story. When people interact, there is an unspoken tracking of the see-saw motion of an emotional balance sheet between them, and an attempt to make sure it remains as even as possible. In my experience, women tend to be more attuned to this than men (perhaps the result of an unfair history that has relegated them to this realm). Certainly, in this film, Julia has a deeper understanding of this balance than Jordan does. As someone who works on the fringes of the sex industry, she is adept in quantifying the satisfaction of emotional need and sexual desire, in understanding how these things are traded, and how much they can cost.

At the beginning of the film, Jordan is unaware of the value of anything that can't be entered in accounting software. He makes a joke about 'the karma bank' in an early scene, unaware of the forces he is accidentally invoking, and unaware that he will have to come to terms with them before his arc is complete. Ultimately, this is why he is the protagonist; because he has something important to discover. He isn't having to come to terms with the accounting practices & balances that have to do with finance (those methodologies of bean counting that shift from culture to culture and era to era). But rather, he has to come to a keener understanding of those other, more universal balance sheets that determine how we deal with one another, and ultimately how we define ourselves. This, for me, is the motor at the core of My Awkward Sexual Adventure."

While there is absolutely no doubt that Jordan's ex-girlfriend, Rachel, is a selfish bitch, what sets My Awkward Sexual Adventure apart from so many other films in its genre is that the audience can't stop itself from caring about Jordan and Julia -- two deeply wounded and vulnerable adults who could actually help each other if they could only get past some of their emotional baggage.

Although the film's structure can occasionally be frustrating, it has a mature approach to sex and sensuality, as well as some great laughs. Here's one of the key scenes: