We're still trying to eradicate diseases that have plagued humans for centuries. References to malaria, for instance, have been found in recorded history in 2700 BC China. Riaan Rifkin, a prehistoric archaeologist, together with geneticists at the University of Pretoria, South Africa gets down to the root of origins of human disease pathogens in sub-Saharan Africa, the cradle of mankind. He and his team are trying to pin down the origins of human disease and establish a sub-Saharan African disease baseline that precedes the exodus of Homo sapiens from Africa 65000 years ago and, perhaps, to also assist in the discovery of novel cures to old diseases that still plague us today.

Read our interview with Rifkin and follow the group's work in this project on ResearchGate.

ResearchGate: What drew you to this particular question of the disease baseline?

Riaan Rifkin: As an anthropologist and prehistoric archaeologist I am fascinated by the origins of human disease pathogens in Africa. During my PhD research I had the opportunity to perform several experimental studies and clinical trials aimed to explore the efficacy of red ochre as a sunscreen, insect repellent and as an animal skin preservative. Learning about the adverse effects of excessive sunlight and disease-bearing mosquitoes on prehistoric human health was captivating. I soon realised, however, that current models and published literature concerning Pleistocene disease prevalence provide inadequate information concerning the diseases that infected our prehistoric African ancestors. So of course I had to further investigate this topic!

RG: Where did people suspect the origin of most human diseases up until now?

Riaan Rifkin: A prevailing view of the origins of modern human diseases is that most arose after the advent of animal domestication and urbanisation during the Neolithic Period some 12 000 years ago. As a result, the search for the origins of diseases has focussed largely on domestic animals and environments outside Africa. More recently, several scholars have provided increasing evidence for the existence of many current pathogens in prehistoric Africa. We now believe that many of these tropical infections are likely to have played a significant role in the human evolutionary process much earlier than thought.

RG: Where do you think human diseases originated?

Rifkin: Recent reviews concerning the origins of modern human disease pathogens highlight the enormous gaps in our understanding of the influence of disease on human evolution in Africa. Besides being the cradle of modern Homo sapiens, sub-Saharan Africa is a very rich biogeographic disease region. It is likely that we can find the key to the original state of human disease susceptibility in prehistoric populations who inhabited the region for the past 150 000 years. These small, hunter-gatherer groups could probably did not hold a broad range of epidemic pathogens agents such as measles and influenza. Nevertheless, most modern vector-borne pathogens come from this pre-65 000 year "Pleistocene disease baseline."

RG: How did you come to believe this?

Rifkin: This project has just begun and we have many unanswered questions. But we know that up to 80 percent of living hunter-gatherers succumbed to disease before reaching reproductive age. And from an evolutionary anthropological perspective, it is noteworthy that high levels of pathogen-stress often gives rise to in-group sociality and avoidance strategies which, in turn, present efficient infection-prevention mechanisms. Disease pathogens therefore acted as selective forces that, besides shaping the human biological immune system, also incited the evolution of a "behavioral immune system."

RG: What's on your agenda?

Rifkin: Current assessments of evidence for prehistoric pathogens are providing increasingly informed perspectives on the taxonomic range and geographic origins of diseases. What's missing is the analysis of insect vectors, intestinal parasites and ancient pathogenic DNA (apDNA) from prehistoric African contexts. I recently instigated this 'origins initiative' aimed at ascertaining the origins, in sub-Saharan Africa, of human disease vectors and pathogens. I focus on two essential but largely unanswered questions regarding the evolutionary history of our species in southern Africa: First, what is the so-called "Pleistocene disease baseline?" And, second, in which ways did diseases and non-pathogenic microbes impact human evolutionary processes? 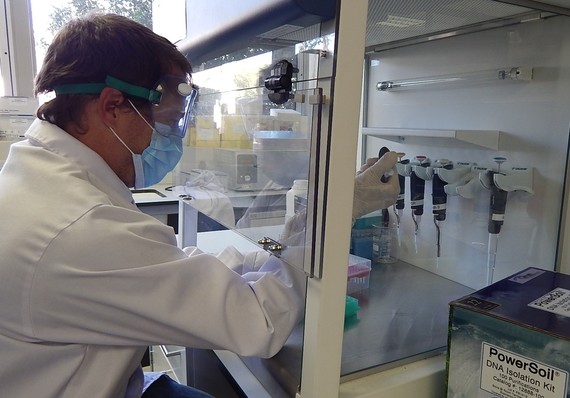 DNA sequencing and analysis in the lab. Credit: Riaan Rifkin.

RG: How are you going to do research this? Where do you find samples of disease vectors from thousands of years ago?

Rifkin: We analyze archaeological soils associated with human activities or occupation in caves and also human coprolites, preserved excrement, from several Middle Stone Age and Later Stone Age archaeological sites dating from 150 000 to 1500 years ago. These sites are representative of fully modern human behaviour: Southern African archaeologists have found the very first examples of abstract and figurative art here, have shown that our ancestors made use of fire to manufacture stone tools and produced some of the oldest known personal ornaments and red pigment-based cosmetics!

I focus on three main sources of archaeological information. I look at insect disease vectors (fleas, lice and ticks), intestinal parasites and microbial pathogens from a macroscopic, microscopic and molecular perspective. For this, we're collecting soil samples from these archaeological sites adhering to a strict anti-contamination protocol. We wear biologically-impervious hooded coveralls, latex gloves, perspex goggles and surgical masks. Our sampling equipment is regularly decontaminated and samples are immediately sealed in sterile centrifuge tubes and frozen.

RG: What happens in the lab?

Rifkin: In the lab, following the extraction of vectors and parasitic eggs, we use a biomolecular approach to detect ancient pathogens. The Centre for Microbial Ecology and Genomics (CMEG) has considerable experience in studying extreme environments and has mastered the extraction of DNA from soils from the Namib Desert and Antarctica. And the application of these techniques to prehistoric sediments has already provided highly encouraging results. I then use DNA sequencing methods to detect pathogenic viruses, bacteria and other eukaryotic microbes in the samples.

"Essentially, it might help us answer the following questions: Which pathogens originated in Africa?"

RG: You're work is ongoing. What are you hoping for?

Rifkin: We hope that the recovery of arthropod vectors, helminths and ancient microbial DNA from prehistoric southern African contexts will revolutionize current views on the origins of human pathogens. Essentially, it might help us answer the following questions: Which pathogens originated in Africa? How did they disperse? Is there evidence for machanisms that countered contagion from coexistent archaeological contexts? I'm hoping that our research will establish a new paradigm for understanding the serious epidemics in sub-Saharan Africa by providing novel data on the evolution of vectors and pathogens.

RG: What will you do with these results? What's next?

Rifkin: I see the sequencing of disease vector and pathogen genomes as a first step to understanding the origins, lifecycles and transmission rates of prehistoric diseases that infected our African ancestors. It is conceivable that this type of research can also contribute to the improvement of novel and specific medical treatments to eradicate diseases. As a next step, I hope to do a genome-wide comparison of ancient and modern pathogen DNA. Prehistoric pathogens can then be screened for new vaccine targets, and our results could further be used to identify close relatives of modern pathogens and provide clues that may aid in the management of modern-day disease threats.

RG: How can we follow your research project and read about your results?

Rifkin: Regular updates about the project and all our published papers will be posted on our respective ResearchGate profiles. Our research is also supported by the University of Pretoria and the National Geographic Society, and updates will be posted on the websites of these institutions.