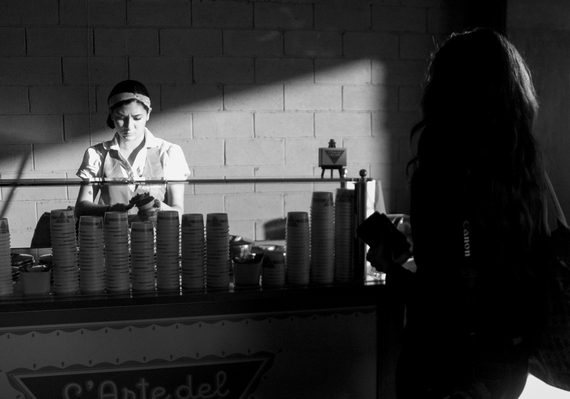 If someone told you to look at this photo and write a short story about it, where would you start? What is the woman behind the counter thinking about? Is she angst-ridden? Are her thoughts some place far away from this ice cream stand?

In truth, there's probably nothing terribly interesting going on here. Yet, the shadows and late-afternoon light create drama, turning the routine into something much more interesting.

While shadows and interesting light are staples of good street photography, it's also important to ask yourself, "what's the story I'm trying to tell here?"

For Mike Lee, a New York City street photographer and writer, the story was the "solemnity" of the woman's face behind the counter.

Someone else might have seen a different a story. Instead of capturing her while she is staring intently at her task, they might have snapped the photo as she smiled and handed the ice cream to a customer.

In discussing his work, Mike says he finds inspiration from different artists -- from Henri Cartier-Bresson, the godfather of modern street photography, to Alexander Rodchenko, an early 20th-century Russian artist. It's also evident looking at Mike's recently published e-book, The Invisible Mirror, that like many New York artists, he is influenced by Edward Hopper. Mike says Hopper was the first painter he remembers being aware of as a child and pinpoints a television show he saw with a segment devoted to the painter. Hopper also happened to be a favorite of his mother's.

Some of Hopper's most recognizable work is quintessential New York, the city Mike moved to in his 20s. Hopper understood the city's muted afternoon light, the long shadows cast by its towering skyline and even the harshness of an overhead fluorescent bulb in a lonely diner.

"When you walk through Greenwich Village, you cannot escape Hopper, particularly in the morning; the light is there -- the shadows," Mike says. "There is also a romantic warmth to his work that I attempt with mine, particularly in color. So whenever I am out there, I'm seeing what Hopper saw decades before."

But our influences are more than just what artists we've studied or admired. We all bring our own personal experiences, biases and values to our photographs, whether it's a conscious effort or not. Mike captured the image at the top of the page while on a photo walk on the High Line, a former abandoned railroad spur that in recent years has found a new life as a linear park. Mike, who grew up in a strong union family, says he has always had a strong empathy for working men and women. So, the story he wanted to tell is one of dignity.

Are you going to see a story before you take every photo? Of course not. A lot of times in street photography, you're reacting too quickly to a scene to ponder what it's about until after you've taken the picture. But there's still time to shape the story during post processing in the way you crop the image or how you adjust the tones, contrast and color.

"What I want the viewer to take away from the photograph is a willingness to provoke the imagination. Create your own story in your mind and consider there is more than the exchange of a cup of ice cream regarding the person at the counter," he says. "She is someone with history and a future. Just like you."

Featured image by Mike Lee. It is used here with permission. You can see more of his work on his website. A version of this article appears on Cosmic Smudge.