Becoming a mega-star as an artist, regardless of the medium you work in, is difficult at best. You're here one moment, gone the next... or you actually experience what it's like to "make it," good for you! Inevitably you will find yourself asking, now what? Most artists can't answer that question until it becomes their reality, and even then it's not something you can begin to estimate the toll it eventually takes on your body of work and "fans." Fame, let's face it, in our current climate of YouTube hits and reality-based talent shows is usually a short-lived blessing and/or curse.

With the recording industry selling fewer artists to the masses and creating more "name-brands" to dominate the field, the question has to be asked... where do "stars" go when they've been dismissed by the big guns who once owned them? Do they fall away or reinvent themselves? Do they find a place to hide? The answer for one of the great industry giants, Grammy-Award Winning Artist Colin Hay, lead singer of the mega-hit 80's band, Men at Work, is a solid, none of the above. 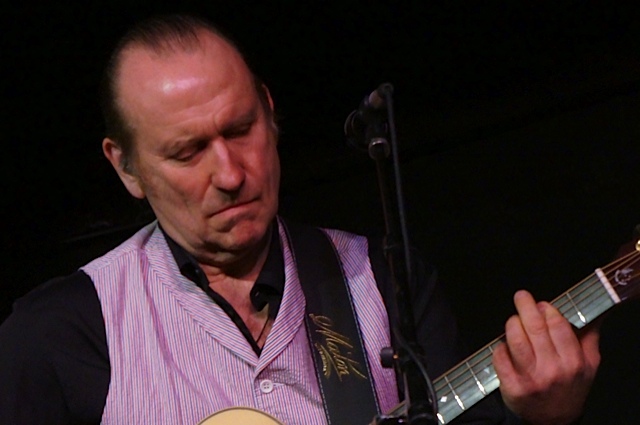 If you're not familiar with his last 20-plus years of work, you'll surely know these tunes: "Down Under," "Overkill" (before and after the mega success re-release on Scrubs), "Who Can It Be Now?" And although these tunes are iconic of the '80s and beyond, they're not exactly what some would call representations of who he is today.

Hay and I recently sat down for an interview about his current body of work and a discussion on how even the most successful artists, whether "new" or "old" in the industry, still have to work to find their niche and sources of inspiration, before his album release concert for, (Gathering Mercury, Compass/Lazy Eye Records) at the Tri-Lakes Fine Arts Center in Palmer Lake, Colorado. If you don't already have a copy of Gathering Mercury, please get one today. It is by far one of, if not his best, work to date. It is a masterful and diverse album full of inspiration from Hay's experiences with life and loss.

Hay offered up a very candid and personal look at what it means to be an artist today and how he created a world of his own after Men at Work through talent, sweat, and a pure love for the art. In his own words, Hay says what every artist needs to hear.

It's not like I made a decision to go from Men at Work to just "Colin Hay." I've always been the same person. I didn't have to reinvent anything. I just deal with different situations. In many ways, I've been playing the guitar and singing since I was 14. It's like this for many people. You work for 10, 15 years and you have this dream of being creative and in a famous rock band and that happened for us. It was short lived as a lot of bands are though. You think, oh, this is my life now, this is what defines me and then one day you figure out that it's not the case. Then you're left figuring out how to stay in the game.

When the band happened, it was more of a punctuation mark than anything else. No one was giving record deals to acoustic players. So we formed a band and did that and then it went away. It's like, "that was fun," and then we got back to what we were doing in the first place. But that's not what it's like for a lot of people. The most successful guy who did what I did was Sting. He had the band that was massively successful and then he went on to become massively successful himself. There's nothing more inspirational than that.

My story is very different than that. I went from having a lot of success to no success at all. Still you could say that my success is very, very humbling. You can't will it though if success isn't happening. You have to be where you are. Always looking forward. That's important. The transition isn't really there. People say to me, "you must be a lot happier now because you're doing exactly what you've wanted to do." But it's not true. It's not better than it was because no one's really ever told me what to do.

However, I'm not going to pretend that I've not been frustrated. Sometimes you do what you think is your best work and it's a secret. It drives me crazy. But I can't let it. There's nothing you can do about this. You can just do what you do and the people that do have it dearly love it. The music industry is fraught with obstacles. It has nothing to do with being supporting and your music or creativity. It's about making money. There's nothing wrong with that because it's a business.

At some point, as an artist, you have to realize this. You have to go on to find your audience because they're really out there. And that's what I decided to do. The only think I'm in control of is playing live and making as good of a recording as I possibly can with the tools that I have. I have to go on the road and enjoy my life. I've been doing this a long time and made a decision about how I want to go about it all. I have a great life. I'm 59 years old. I enjoy my life. Of course there's always things I think about that could be better or worse but when it's all said and done, I do what I want to do. The danger is when you try to chase what could have been or has been. You have to not let that desire get too big. It will drive you nuts. I can't remember in the last 10 to 15 years the last time someone from the audience yelled out, "Down Under!" Or "Overkill!" It's not that people don't like those songs; they just don't care about them anymore. And that's a pretty healthy place to be when you're me.

Although Colin Hay may always be best known as a part of Men at Work, his body of solo work available today (11 albums), his steady fan base, and beautiful stories speak far louder than the almighty "numbers" the recording industry would like the masses to believe as the sole dictators of success. However, there is nothing more beautiful than seeing a core of personal strength, diversity in creation, and sheer diligence/love sit at the heart of an artist's work. Colin Hay isn't just an icon or figure of musicians past; he's a seamless representation of the greats of our time, alive and well in the here and now.