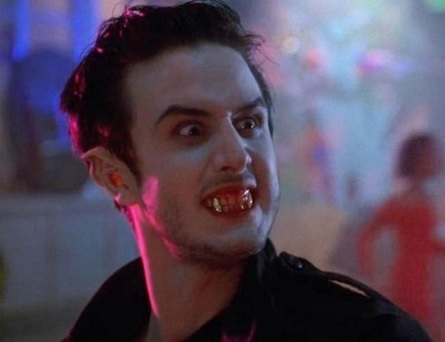 Almost 20 years ago this week, Buffy the Vampire Slayer debuted on television. While on the surface the TV was about, well, slaying vampires, it was actually about much more than that. It was about the scariness of growing up, living with the duality of darkness and light, and struggling to find your own voice.

There's a term in pop culture for when a mediocre TV show suddenly becomes better: Riker's beard. It refers to a character on Star Trek: The Next Generation, Captain William T. Riker, whose beard, fans say, vastly improved the show.

As per TV Tropes, the show's sudden improvement probably had less to do with Riker's hirsuteness and more to do with "a change in direction" and "an increased willingness to experiment with the format and scope of the show."

Your blog and personal branding are like that television show struggling find its voice, to hit its stride and go from average to "completely awesome," as Urban Dictionary says. Here are a few ways that may help.

Embrace your comfort zone. The story behind Riker's beard was that the actor who portrayed the character, Jonathan Frakes, grew a beard during a break from the show as he "dislikes shaving." The producers liked the look and asked him to keep it.

What comes easiest to you? What do you enjoy most? Perhaps you have a blast writing rants, or can't get enough of reviews, or can't stop making lists. There's a reason why these formats are not just fun but an obsession -- they interest you and you're good at them. And chances are they get more of a reaction from your readers.

Perhaps you're addicted to Twitter while Facebook is a struggle, or Pinterest is a joy while Instagram is annoying. Put your energy into what you actually enjoy instead of spreading yourself too thin. Be really good at a few things rather than mediocre at a lot.

Embrace your inner jerk. Some fans of Buffy the Vampire Slayer (hereafter known as BTVS) would agree that the first season was, well, not so great. The special effects were laughable and the Scooby Gang had yet to find its rhythm and spark. Xander's jokes fell flat too, as though the actor, Nicholas Brendan, was holding back the snark that was trying to burst through.

Then entered Spike, BTVS's Riker's beard. The bleached blond blood-sucker was more misanthrope than Big Bad, and provided humor and contrast to do-gooders Buffy, Willow, and Xander, and cartoonishly evil Master or Angelus. At the same time, Xander let loose his snark.

While being "nice" or "safe" may seem like you'll reach a wider audience, all you'll do is bore most people. Rant, get angry, be sarcastic. Just don't do it all the time. Fans might love Spike, but that can't be said for most of the characters on the show.

Let your voice evolve. BTVS started campy, became smart and funny, and then evolved into something darker and more complex as it grappled with themes of illness, death, and self-sacrifice.

On the flip side, Angel, in his own Buffy spinoff, started as the melancholy brooder his fans knew and loved, but as the show progressed, gained vulnerability and a sense of humor.

Don't be afraid of emotion. A critically-acclaimed episode of BTVS is "The Body." A raw and unflinching look at the death of a loved one, the episode is shot with no background music and punctuated with long and painful stretches of silence.

While you don't necessarily want to tell all, don't shy away from subjects that move you. Also less is more: writing about something in a plain, straightforward way often conveys emotion more strongly than flowery, sentimental language.

Take a risk. While you want to embrace what you're good at, don't be afraid to try something new.

"Once More, with Feeling" is the acclaimed all-musical episode of BTVS. A magic spell forces all the characters to sing (and dance) their real feelings. It was one of the first all-singing episodes on television, and the show's creator, Joss Whedon, was risking a total flop. Instead he created an episode that's still considered one of the most innovative on TV.

Perhaps you've always dreamed of shooting a short film, interviewing that big shot in your field, or traveling somewhere exotic just to blog about it. Take a chance and go for it. What do you have to lose?