The artist's life runs on a hard road. After a long, exhaustive journey to create and produce art, the exhibition of your work provides a whole new set of adventures and challenges. Marketing a show requires a skill set that is generally unfamiliar to the artist. Over a series of six articles, we will examine the many ways that an artist can publicize and market their fine art to an indifferent and competitive world. You can create a successful show.

The gallery is your friend and partner. They want you to succeed but their operation is limited. Averaging a dozen gallery shows per year and an aggressive presence at the art fairs, a gallery can only do so much just for you.

As an artist, I would like nothing more than an aggressive gallerist, a fierce advocate devoted to my success. One who could open media doors. One to take the heat that I am too tender to suffer. One to glad-hand the collector and get a cashier's check up front. Such is an artist's fantasy. In truth, to exhibit demands a bold and exhaustive effort, far away from the security of the studio. An artist must work harder, more aggressively and more creatively than the gallery to market and publicize properly. At the end of the exhibition, it is your show and yours alone.

Your gallery is not lazy, but they have a routine. Every show gets a press release and a calendar release that is submitted to the local media. You hope your gallerist might have a media connection or will make a few calls, acting as a publicist would, but this is the exception in the barrage of their daily responsibilities. 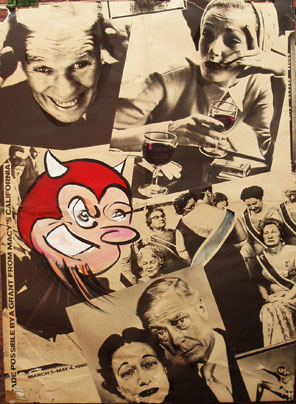 A calendar release is a bare bones fact sheet of who, what, where and when. One or two sentences will simply explain the show. A calendar release supports the short listings that can be found in the "Fun Things To Do" section of a magazine or newspaper. A press release is all about you, your work and the value of your aesthetic. It is very hard to get press, but you must try.

A gallery-produced press release tends to be academic, something aimed at a journal or a glossy art magazine. After all, a master's graduate wrote it. Such a highbrow document has a certain audience and purpose, one that may be contrary to the interest of a general audience. You will need to make an additional effort to engage the public on another level. Your gallery will support you. You need the sort of publicity that will attract an audience outside of your circles. You want to have a crowded opening. In Part Two, we will examine your assets and capabilities in an effort to shape an additional marketing and publicity campaign around you.

The media is rapidly contracting and expanding in many ways. Print media is floundering and digital media is flourishing. Social media is wonderful at informing people whom you already know. At this moment, your best outcome is to be embraced by the print media. It is the surest way to get new warm bodies into the gallery. And the competition for space is fierce. Your local museums and art institutions buy advertising to support their exhibitions. A civic-minded urban newspaper devotes a certain amount of space to cover the arts. Naturally, an editor will favor the story that supports a paying client. Your small gallery show needs to flex a muscle in order to receive any attention. Your extracurricular efforts are the only hope to creating a successful show.

Great things happen when one can throw money at the problem. A printed and mailed invitation is swell but so is a billboard, an expensive advertisement or a skywriter. A publicist can whirl like a dervish as your advocate, but they need to be paid. For most artists, money is not plentiful. You will need to engineer and hustle your own marketing campaign. You will not need to spend much money but it does require a concerted effort, much time and creativity. Just when you thought you might rest, there is another mile to run.

In Parts Three and Four, we will target the traditional and electronic medias. In Part Five, we will create Promotional Partners who will help spread your good word. In Part Six, we will create extracurricular events that continue the energy of your show to the closing day.

Gordy Grundy is an American artist, painter and writer. His day job is spent creating entertainment marketing campaigns at the www.Promotionalist.com

The Fine Art of Publicizing and Marketing Your Fine Art