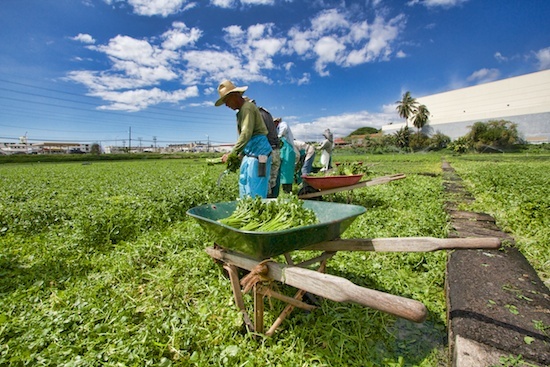 "It's the best watercress in the world." Chef Mavro proudly stated. He didn't grow the watercress or have any financial interest in the Sumida Watercress Farm, this statement came from pure admiration of good product that only a chef can appreciate. I was taking a real 'field trip' with one of Hawaii's best chefs to visit local farms. As we drove to Sumida Farms, Chef Mavro lit up as he told me about the farm which he described as the "most magical place on the island." Those are big words when you are talking about Hawaii, but if you are a chef who concentrates on local sourcing, then a 86-year-old watercress farm seems like a good choice to give the badge of "most magical".

Chef Mavro met Masaru Sumida, the founder of Sumida Watercress Farm, when Chef first moved to Hawaii. Soon watercress was on Chef's menu, and it has stayed on his menu for a very long time. For the 25 years he's been cooking in Hawaii, there's been watercress recipe on the menu. That's 75 to 100 watercress recipes on a seasonally changing menu, and they are all sourced from Sumida Farms in Oahu thanks to that relationship formed years ago. 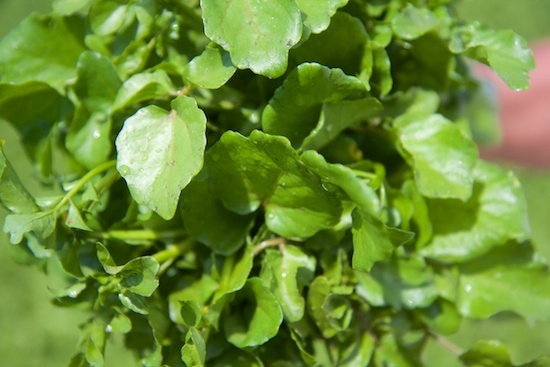 As we neared the farm in Pearl City, an urban jungle that made me feel like I was in New Jersey instead of Hawaii, I didn't see anything magical about the malls and chain stores surrounding the area. But then there it was, a bright patch of vibrant green glistening in the sun. I stared at the nine acres of watercress fields surrounded by concrete buildings and consumerism. This was hardly what I imagined when I was thinking of "farm to table" cuisine!

Kamehameha Schools hold the lease on the land amidst the malls and have been key in also preserving this farm among the modern development. It's zoned for agriculture thanks to the natural springs that lie beneath the plot of land. Those springs are the key to the Sumida watercress production. David, Masaru's son, who is now partially responsible for the farm along with his sister, showed me the natural spring bubbling up in one of the fields pointing out how they protect it and keep the water flowing around the fields. He then waded into the fields to show me how watercress is harvested. The crop has a 2-month cycle and continues to reproduce year-round in this perfect environment of spring water and Hawaiian sunshine. 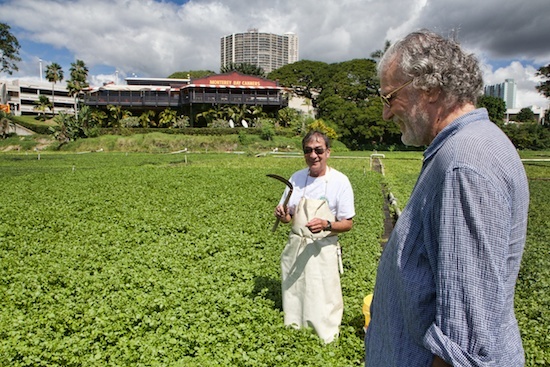 Sumida Farm grows a Florida variety of watercress. It started with two small bundles 'smuggled' on to the island by their crop entomologist who had visited the Florida watercress farms and fell in love with the variety. This was back in the '80s when the regulations weren't quite as strict regarding transport of agricultural products onto the islands. David's eyes crinkled and he laughed as he told me the story stating it actually grows better in Hawaii than it does in Florida.

There are a few things that hinder that growth though; the moths and the birds are the enemies of Hawaii watercress production. Never fear, David and his entomologist have deterrents. The sprinkler systems were put in to keep the moths from laying eggs on the watercress leaves. The sprinklers utilize the spring water so there is an ample supply that gets reused continuously. And the birds are deterred from causing trouble by netting draped over the fields.

Chef Mavro has bundles of watercress delivered from the farm to his restaurant multiple times a week so Chef and David knew each other well. I listened as they discussed watercress recipes as old friends do. I had been lucky enough to enjoy the chef's latest watercress creation on his tasting menu the week before -- watercress and aioli dip served with lamb. That is the dish that put me on the road to meeting David Sumida and touring his farm. 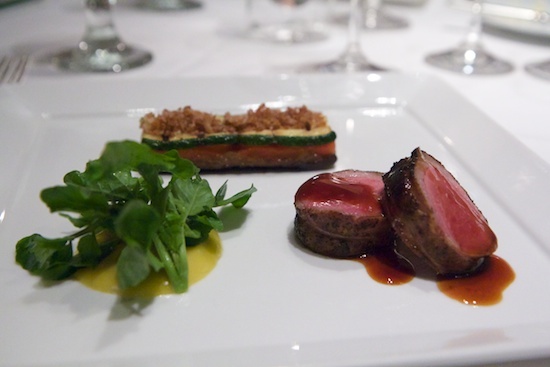 Chef and I teetered along the wet brick paths following David who nimbly walked through the fields and led us to the main building. Here David proudly showed us the first flash freezer system on the islands that allows them to increase the shelf life of the watercress and ship it to other islands. Once again David's father, Masaru, was integral in leading the way with this farming technology.

David handed me a list of recipes before we left. I inwardly smiled as I tucked the recipes away in my bag. Chef had just told me earlier as we drove to the farm "A recipe is nothing -- you must learn to cook and create without a recipe. " I wasn't quite ready to go recipe free, so I was excited to get the list of dishes from David. After spending the last hour at the farm, I of course had a craving for watercress.

Chef and I left the farm and stopped at Ethel's Diner -- a little Hawaiian/Japanese hole-in-the-wall in a gritty Honolulu neighborhood. Chef ordered a pesto watercress sauce over butterfish along with some other popular items that were all delicious. I loved the irony of sitting in this greasy spoon diner with Chef Mavro -- the man behind one of the best restaurants and high end foodie experiences in Hawaii. It's good to know not only does Chef Mavro source his ingredients locally -- but he also dines locally and supports good, small, local establishments.