I have enjoyed many terrific birthdays in San Francisco. I have, if memory serves and it sometimes does, nearly always celebrated my January birthday indoors, perhaps luxuriating in a fine hotel, or soaking in a hot, steaming body of water, or rolling around in a very large bed surrounded by whisky and laughter and various slippery things, all due to the chilly and invariably drizzling, foggy, sleeting, flagrantly unpleasant winter weather outside, weather that has always slammed January in San Francisco like a familiar and necessary refrain.

Not this year. This year, I was sunbathing. This year I was splayed out on a tiny, hidden gem of a beach down in Half Moon Bay, sipping champagne, wearing nothing, but underwear and a smile alongside a gorgeous companion equally -- though significantly more beautifully -- unadorned, both of us marveling at the 74-degree temperature, the glass-calm ocean and the utter surreality of the dry, warm, lightly breezed air. 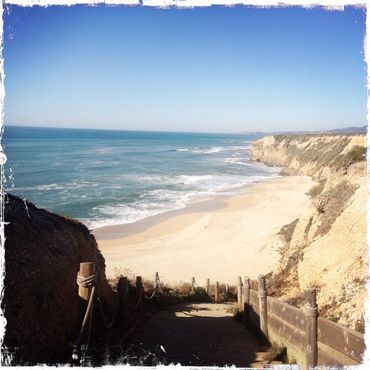 We were, quite obviously, enjoying ourselves immensely. We were gasping at the stillness, the clear and simple heat, the ache and bite of the thirsty sand, repeating over and over that we couldn't believe it was actually winter even as, deep down, we both could sense it -- as I'm sure you can, too: Something is wrong.

Let me be clear: "Something is wrong" isn't just something you mutter to yourself when the weather blips and flops and pulls a weird little stunt, like a rogue cold snap or fluke heat wave that you know will pass in a few days so hey, let's get out the sunblock and have a freak barbecue in December.

This kind of wrongness, it's of a different tang and scale. You can feel it in your bones, your primitive animal nature, your equilibrium. It's not about weather, per se. It's about something bigger. Deeper. And quite a bit scarier.

Surely you already know that California is officially in the midst of a severe, unprecedented drought. You've probably already read that 2013 was the driest year ever recorded in the state, that it could be the driest winter in 500 years, that the Sierra snow pack is 17 percent of what it should be, and that many, many people are beginning to get very, very concerned.

What you might not know is a normal January has zero wildfires, whereas this one has already had 150. What you might not know is the predictive models for the entire western side of the country show extremely bleak times ahead. Go ahead, skim through just how scary it really is. If the insane fire danger alone isn't enough to freak you out, the dour forecasts for all sorts of industries, from agriculture to ski resorts, certainly should.

So really, this is not a column about the weather. This is a column be about gut-level disquiet, about seeing the woes of our city (SF hasn't even reached half of its record-low rainfall for this time of year) and our state, and then widening out that lens of unsettling weirdness to take in the totality of what's happening, from the brutal (and equally unprecedented) "polar vortex" slamming the rest of the country, to extreme disasters, such as Supertyphoon Haiyan, the strongest storm ever recorded at landfall, which killed 6,000 people in the Phillipines.

It recently snowed in Cairo for the first time in 112 years. In June of last year, in Death Valley, they hit the hottest June temperature -- 129 degrees -- ever recorded.

We are, at our core, blood-soaked, spit-infused, bone-hammered animals. We are, behind all our air-conditioned defenses and numbed-out obsession with technology and loneliness, still somehow attuned to the rhythms of the planet, still a living organism deeply interwoven with, and desperately dependent upon, a much larger organism. What happens to her, happens to us. We can feel it. Even if we caused it. Maybe because we caused it. Can you really separate?

Let's take one paragraph right here to openly slap back the mortifying idiocy, the dangerous ignorance of the Tea Party, Fox News and all tiny-brained global warming deniers everywhere, and point instead to the U.N. Intergovernmental Panel on Climate Change's most recent climate report, by far its most shocking and damning yet. Conclusion: It's no longer a matter of when, but how bad.

Which is to say: Dramatic climate change is no longer even remotely preventable. It's here. It will be here for centuries. And yes, most of what's happening is very much our fault. It's now only a question of severity, adaptation and survival.

This piece is an excerpt from a post originally featured on SFGate.com.

Mark Morford is the author of 'The Daring Spectacle: Adventures in Deviant Journalism,' a mega-collection of his finest columns for the San Francisco Chronicle and SFGate, and the creator of the Mark Morford's Apothecary iOS app. He's also a well-known ERYT yoga instructorin San Francisco. Join him on Facebook, or email him.