Often, as I'm watching a movie, I'll start to notice how carefully the filmmaker has worked with a palette of colors to create a specific vision. Sometimes I may be caught off guard by a particular lighting effect, or someone's exquisite attention to period detail. On a small number of occasions, a film's superior art direction has made me like it much more than it deserved.

In 2003, a 16-minute short by the hugely talented and more than mildly twisted Canadian writer/director, Jamie Travis (who might very well be the bastard love child of John Waters and Todd Solondz) captivated audiences at the Toronto International Film Festival. Why The Anderson Children Didn't Come To Dinner was subsequently screened at more than 60 film festivals and hailed as "sumptuously visualized" and "darkly hilarious."

In 2007, a 13-minute short by Travis entitled The Saddest Boy In The World (the second installment in Travis's trilogy about innocent children at risk in dysfunctional suburbia) left the audience in San Francisco's Castro Theatre shocked and awed as little Timothy Higgins clarified the numerous reasons he had decided to commit suicide on his ninth birthday. Here's one of the film's delicious mini-trailers:

The final installment in this trilogy, L'Armoire, is a beautifully realized piece that takes the audience to places it never expected to go. As the film moves backward in time, trying through hypnosis to discover clues to the disappearance of Aaron's best friend Tony, the audience learns how an innocent game of Hide and Seek went horribly wrong (not to mention the role played by the mysterious armoire in Aaron's house). 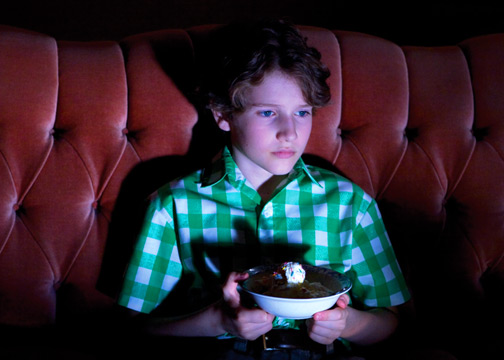 Not only does Travis have a great flare for storytelling, his brilliant use of child-like innocence (framed by Alfredo Santa Ana's musical score) gives this short a polish worthy of Tim Burton. William Cuddy (who scored strongly in Breakfast With Scot) gives a beautiful performance as Aaron, with Ricardo Hoyos making several eerie reappearances as Tony. Here's the trailer:

The Message takes place in Nanking in 1942 following a series of assassination attempts on officials of the Japanese-controlled puppet government. The local Japanese chief of espionage is trying to capture an underground figure known only as "The Phantom," whose coded messages are posted on a community bulletin board. The Phantom, however, has just fallen for a hoax and sent a message to his organization instructing them to initiate another assassination. 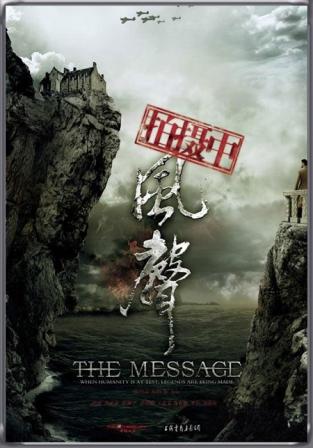 In order to trap the Phantom, the chief invites several suspects (who might know something about the Chinese counter-insurgency) to an elaborate and isolated Gothic mansion under the false pretense that he is fighting a tight deadline in a case that involves code-breaking. Among the people locked in the mansion (for what is essentially an overproduced game of Clue with hyperzealous art direction) are the following (you can watch video profiles of some of these characters here):

As the scenes unfold, the invited guests slowly realize that one of them is an undercover agent. Meanwhile, hidden away in the basement is an elaborate torture chamber (as well as a curious little old man who is widely known and intensely feared for his ability to inject various chemicals into people's bodies that can produce untold levels of agony).

A deadly process of elimination begins in the more luxurious rooms upstairs. As the Phantom attempts to keep his identity secret, he must get a crucial message to his followers instructing them to abort the planned assassination or else his entire organization could be destroyed. 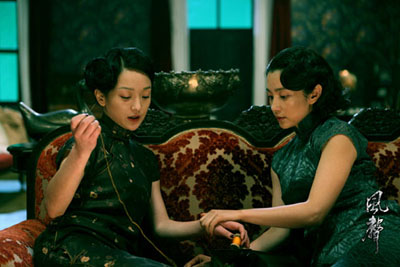 In a curious way, The Message suffers from an embarrassment of riches. Haihang Xiao and Haoyu Yang's elaborate production design is stunning (even if one gets a little tired of everything being drenched in rich shades of green). Jake Pollock's lush cinematography helps to add a definite sense of period and intrigue, aided by Timmy Yip's costume designs. Michiru Oshima's blood-pumping score helps keep the suspense level high.

And yet, surprisingly, The Message can get horribly confusing (even the most devout Agatha Christie fans might be scratching their heads trying to figure out who did what to whom). Here's the trailer:

When a singular talent shows its face, the effect can be so intoxicating that one forgets the person is at the beginning stages of his career. On the basis of his 12-minute short, After, Canadian writer/director Mark Pariselli is clearly someone whose future shows great promise.

In Pariselli's film, three gawky gay intellectuals sit on the front steps of a house as they focus their fantasies on a hunky young jock in a red shirt who has been playing touch football with some friends across the street. 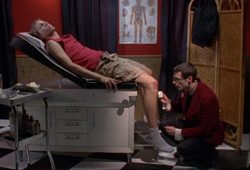 Pariselli was inspired to create After by Dennis Cooper's poem "After School, Street Football, Eighth Grade," which reads as follows:

"Their jeans sparkled, cut off
way above the knee, and my
friends and I would watch them
from my porch, books of poems
lost in our laps, eyes wide as
tropical fish behind our glasses.

Their football flashed from hand
to hand, tennis shoes gripped
the asphalt, sweat's spotlight on
their strong backs. We would
dream of hugging them, and crouch
later in weird rooms, and come.

Once their ball fell our way
so two of them came over, hands
on their hips, asking us to
throw it to them, which Arthur did,
badly, and they chased it back.
One turned to yell, "Thanks."

and we dreamed of his long
teeth in our necks. We
wanted them to wander over,
place deep wet underarms to
our lips, and then their white
asses, then those loud mouths.

One day one guy was very tired,
didn't move fast enough,
so a car hit him and he sprawled
fifty feet away, sexy, but he was
dead, blood like lipstick, then
those great boys stood together.

on the sidewalk and we joined them,
mixing in like one big friendship
to the cops, who asked if we were,
and those boys were too sad to counter.
We'd known his name, Tim, and how
he'd turned to thank us nicely

but now he was under a sheet,
anonymous as God, the big boys crying,
spitting words, and we stunned
like intellectuals get, our high
voices soft as the tinkling of a
chandelier on a ceiling too high to see."

Unlike books and historical events (which usually lay the groundwork for a linear narrative), a poem offers a different kind of artistic license. While After benefits from the often breathtaking cinematography by Kirk Holmes and a powerful original score composed by Adrien Maurer and Taku Yamada, Pariselli's ability to capture the essence of yearning and present three wildly diverse -- and yet remarkably elegant -- visions of sexual fantasy demonstrates a major talent at work in this stunningly shot film.

Anyone who has been the subject of a malware attack knows that genius is not always put to good use. One reason so many reformed hackers go to work for the government is because, all too often, it takes a thief to catch a thief. Think of the nerds who rode to the rescue in movies like 1983's WarGames and 1992's Sneakers. Then try to imagine what their work would have been like without computers to help them!

The folks at Mental Slapstick have created a delicious espionage romp. Set in 1935, as American cryptographers are struggling to break some new Japanese encryption codes, The Red Machine is a delightfully intelligent, delectably subversive, and highly entertaining film with such a meticulous sense of style that viewers might be happy to just sit back and bask in its attention to period detail. 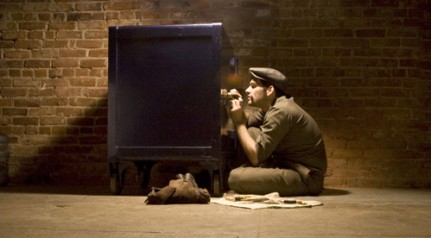 Co-written and co-directed by Stephanie Argy and Alec Boehm (who also acted as cinematographer) The Red Machine benefits immensely from Mel Horan's production design and Thuyen Tang's art direction. In her article entitled Crafting A Stylized Caper in the May 2009 issue of American Cinematographer, Argy explains that:

"Though we had co-written and co-directed several shorts and collaborated on others' projects, this was our first feature as co-directors. In hindsight, making The Red Machine was almost as impossible as our heroes' mission -- on a very low budget, we had to depict Washington in 1935 and, through flashbacks, Tokyo in 1928. We had 32 actors in period costumes, 36 separate locations, and a 27-day shoot.

Our goal was to create something stylized not only in the narrative and the performances, but also in the visuals and the audio. We realized from the beginning that postproduction was going to be very important. Many of the decisions we made about methods and equipment were informed by the workflow we had in mind. We were privileged to be able to really experiment with the look and push for the stylized feel we wanted.

At one point, Aaron noted that color correction is relatively easy if you're just balancing the images as they were shot. Going for a more stylized look definitely complicates things. But, he added, 'So many indie movies are made today, you need to do everything to make yours stand out. Color correction is one way to do that.' 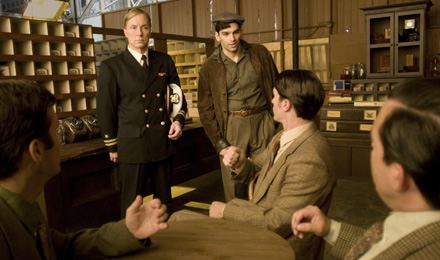 The result will delight any cinéaste. Not only has the creative team captured a true sense of period, many of their shots are filled with so much wit and style that one can't help but sit there smiling at the way the scene has been framed. Separating the main cast of characters into cryptographers (cryppies), thieves, and spies, the story revolves around:

The mission for Coburn and Doyle is both delicate and dangerous: They must locate the Japanese code machine that has been using an unbreakable technology. To do so, they must gain entry to the residence of Ichiro Shimada (now Japan's naval attaché in Washington). They must obtain a working knowledge of Japan's "red machine" without letting the Japanese know that the machine has been altered or tampered with in any way. 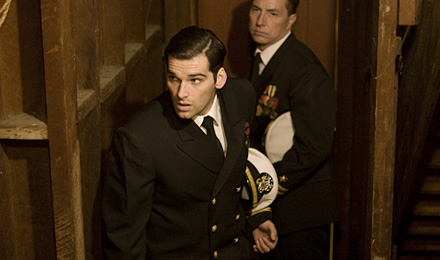 In addition to its magnificent sense of style, The Red Machine has Donal Thoms-Capello (who reminds one of a young Horst Buchholz) giving a grand performance as the sexy, wise-ass crook with high artistic standards regarding how one should go about breaking and entering a potential crime scene. Lee Perkins is almost comically stonefaced as Coburn. Bryan Larkin and Roger Ainslee add to the sense of mischief as Commanders Dean and Petrie.

Hardly a typical "buddy film," The Red Machine has been made with a rare level of intelligence, wit, and a gorgeous devotion to style. To divulge any more state secrets would rob you of the film's many delights. For starters, though, you might want to take note of the jazzy riff on Bizet's smuggler's theme from Carmen that accompanies this trailer: