There is an urban myth about the guest who drank from her finger bowl, thinking the clear liquid was a kind of soup. In order to put her guest at ease, the hostess did the same. While finger bowls may be a thing of the past, they do exist in many private clubs across the country and are still served at some formal dinners, so it's good to know how to use one. Plus, you may want to serve them after some casual dinners yourself, as during a cracked-crab dinner.

• After the dinner plate has been cleared, a waiter will bring each guest a finger bowl, which is a small bowl filled with water, often with a slice of lemon floating in it.

• The bowl will usually be served on a larger plate, on top of a paper or cloth doily, with a dessert fork to the left and a dessert spoon to the right of the bowl.

• After the waiter has placed the plate in front of you, remove the fork, placing it on the table to the left of the plate. Do the same thing with the spoon, placing it to the right of the bowl.

• Gently dip just the fingertips of one hand into the bowl. Wipe your fingertips dry with the napkin, holding it on your lap while doing so. Repeat with the other hand.

• Using both hands, remove the bowl from the plate, along with doily, and place them to the left of the plate so the waiter can remove them. (The bowl with its doily is placed on the left side, as the coffee cup will be on your right side.)

• The empty plate will now serve as a charger for a plated dessert (the doily is used to protect the plate).

Lisa Mirza Grotts is a recognized etiquette expert, an on-air contributor, and the author of A Traveler's Passport to Etiquette. She is a former director of protocol for the city and county of San Francisco and the founder and CEO of The AML Group (www.AMLGroup.com), certified etiquette and protocol consultants. Her clients range from Stanford Hospital to Cornell University and Levi Strauss. She has been quoted by Condé Nast Traveler, InStyle magazine, and the Los Angeles Times. To learn more about Lisa, follow her on www.Twitter.com/LisaGrotts and www.Facebook.com/LisaGrotts. 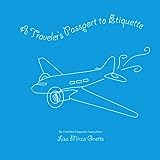 A Traveler's Passport to Etiquette
by Lisa Mirza Grotts