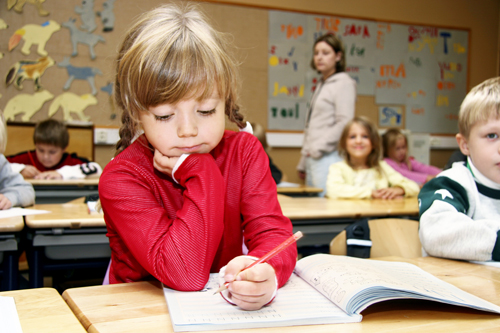 "Finnish schools are fear-free places where children don't need to worry about competition, failure or performance that in many countries are fueled by standardized testing." -- Pasi Sahlberg
Photo courtesy of Elvi Rista

Systematic pursuit of children's wellbeing and happiness in secure environments takes precedence over measured academic achievements in Finnish schools, according to Pasi Sahlberg, author of the 2013 University of Louisville Grawemeyer Award winning book, Finnish Lessons: What Can the World Learn from Educational Change in Finland? It was the book many educators turned to last year to find ways to make their own schools better. Sahlberg explained to me that Finland will continue to work on the same mission it has had for over 40 years: to give access to high quality and safe schools for all children regardless of their family backgrounds, domiciles, mother tongues, or abilities. Thinking forward, what can we learn from the newer strategies being pursued by Finland's education reformers to stay at the top? I asked Pasi to discuss this further in The Global Search for Education. 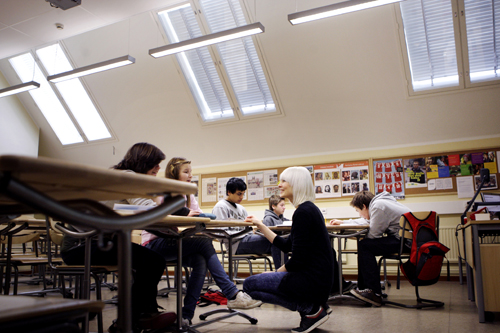 "Today nearly 45 percent of Finnish 16-year-olds choose to study in vocational upper secondary schools and 50 percent in academic high schools. I am an advocate of flexible learning pathways that provide individuals personalized options to study what they believe will help them to be successful in life."
-- Pasi Sahlberg
Photo courtesy of Liisa Takala

There are significant factors beyond the classroom that ensure Finnish children thrive in school. Can you summarize the support services provided currently and what you think needs to be improved?

Most Finnish children go to optional pre-school at age 6 and compulsory education begins at age of 7. I belong to those who don't believe that starting school earlier would actually be beneficial to children's cognitive or social development. Finland has a universal heavily subsidized public childcare service that gives all children a right to daycare and offers them an environment to develop and grow as individuals without any pressure of academic or other performance. Play, music and learning to be with other children are common modes of children's lives in daycare.

Another important aspect of Finnish schools is systematic pursuit of wellbeing and happiness, especially during the early years of primary school. Finnish schools are fear-free places where children don't need to worry about competition, failure or performance that in many countries are fueled by standardized testing. Every school in Finland has a Pupil Welfare Team that monitors and processes issues related to behavior, health and progress of children. It consists of the school head, a special education teacher, school nurse or doctor, psychologist and social worker. The main aim of this team is to prevent problems that might jeopardize wellbeing. Primary school teachers put wellbeing and happiness of their pupils before measured academic progress.

Despite this, there is a growing concern among psychologists and pediatricians that the quality of children's lives outside of school is declining. Some argue that parents increasingly leave upbringing of their children to schools. Teachers continue to urge parents to take more responsibility for their children e.g. giving more time and attention to them at home. What Finland needs first and foremost is better alignment of responsibilities between homes and schools and perhaps a national program that would help mothers and fathers to take better care of the young ones and simply love them more. In this worrying situation it is paramount that Finnish politicians secure sufficient funding for child wellbeing services in all schools. 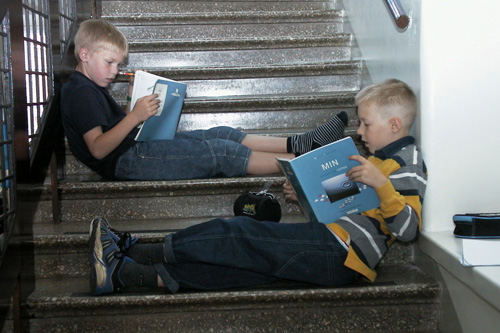 "What Finland needs first and foremost is better alignment of responsibilities between homes and schools and perhaps a national program that would help mothers and fathers to take better care of the young ones and simply love them more." -- Pasi Sahlberg
Photo courtesy of Finnish Ministry for Education and Culture

Is the problem for some OECD countries about catching up with global college graduation rates or is the problem about improving options for learning pathways so graduates are equipped with the skills they need to find jobs in the real world?

I am an advocate of flexible learning pathways that provide individuals personalized options to study what they believe will help them to be successful in life. For example, I think that the U.S. school system would benefit from a dual system in high school where young people who are interested in doing or making things with their hands, for instance, could have high quality vocational programs or schools that would equip them with the skills they need to find jobs or employ themselves. There are many education systems around the world, including Finland, where upper secondary education has distinct tracks for classical academic studies and professional learning. Higher education will become more easily accessible through digital learning very soon, and I believe college graduation rates as a proxy for the advancement of an education system will lose part of their meaning. 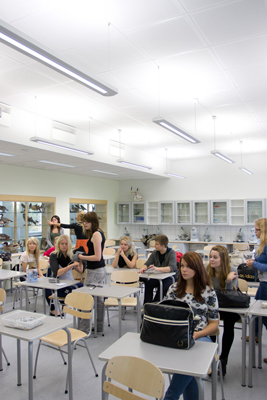 "A universal standard for financing schools, so that resources are channeled to schools according to real needs: this is essential in order to enhance equity and quality in American education." -- Pasi Sahlberg Photo courtesy of Finnish Ministry for Education and Culture

Can you talk about Finland's forward thinking goals in vocational education?

As I mentioned earlier, Finland is one of several European countries with a competitive option for 16-year-olds to choose technical and vocational studies rather than to continue academic learning in high school that is predominantly a road to liberal arts degrees. Some people argue that vocational schools are second or even third options for young people and therefore motivation and discipline are often issues in these schools. But it doesn't need to be so. Barely 20 years ago, vocational education was a bad word among parents and many students in Finland. About one third of lower secondary school leavers at that time entered vocational schools, some because the bar to academic high school was too high. Drop out from these schools was a chronic problem. Systematic polishing of the image of vocational education started in the 1990's in Finland.

I would also like to emphasize the important role that career guidance plays in Finnish basic school (grades 1 to 9). All students have weekly lesson time with qualified career counselors in upper grades of basic school. Students also spend a two-week period in a workplace to learn about the world of work and test their own perceptions of different occupations. The aim of career guidance is to minimize wrong choices by making available individualized information and help before young people make their decisions for further studies.

Today nearly 45 percent of Finnish 16-year-olds choose to study in vocational upper secondary schools and 50 percent in academic high schools. Competition to some vocational programs has become fierce. Much of the negative stigma that vocational schools had in Finland 20 years ago is gone. 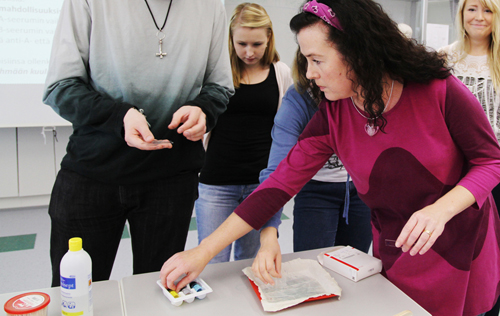 "I would like to see more educating children [around the world] to feel empathy and as Sir Ken Robinson says, finding their talents through music, arts and physical education in tandem with traditional academic curriculum." -- Pasi Sahlberg
Photo courtesy of Finnish Ministry for Education and Culture

"Online learning stands a much better chance to improve over time and eventually become good enough to offer a competitive value proposition even for mainstream students. That's when the classroom system will really change. Parents will start demanding it." - Clayton Christensen. What is your response to Clayton's argument?

I think Clayton is a visionary and his view to how technology will change schools will probably be pretty close to his prediction. But there are different scenarios for how this will play out.

One scenario is that schools will race after technology and align core instructional operations to rely on digital and other technological solutions. This will certainly change classrooms and what goes on in them. Learning would still primarily take place in schools supported by homework as it is now.

A second scenario views schools merely as places for facilitation of study and checking of achievement. Learning could be from any place. Personalized digital learning would be the most common mode of study.

A third scenario would be to elevate schools as places for social learning and developmental skills. Cooperative learning, problem solving and cultivating the habits of mind would be at the heart of school life.

I am already seeing signs of the third scenario around the world. There are parents who have started to demand it because they think that their children spend too much time with technology and that schools should help them to learn to be with other people. I would like to see more schools educating children to feel empathy and as Sir Ken Robinson says, finding their talents through music, arts and physical education in tandem with traditional academic curriculum. 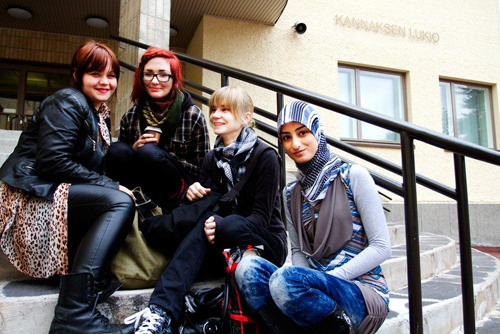 "The Finnish school system cannot be transferred anywhere else in the world. Many of the successful aspects of Finland's education system are rooted deep in our culture and values." -- Pasi Sahlberg
Photo courtesy of Finnish Ministry for Education and Culture

Jack Buckley, Commissioner of the National Center for Education Statistics, said he "has always been a little puzzled by the high level of attention trained on Finland. Finland captured the world's attention for a variety of reasons but there are other places to look for case studies." How do you see this?

In my book, I raise two points of warning. First, I am not saying that Finland has the best education system in the world and that others should imitate what we have done. This global fame has actually been quite embarrassing for us Finns. Finnish educators are not thrilled about PISA, TIMSS, or any other international comparisons. We would rather hope Finland is seen as a country where four out of five taxpayers trust our public school system, and where three out of four citizens think that our publicly funded education system is our most significant accomplishment since independence in 1917. We celebrate these achievements rather than high rankings in global education league tables.

Second, I make it very clear that the Finnish school system cannot be transferred anywhere else in the world. Many of the successful aspects of Finland's education system are rooted deep in our culture and values, which are different from those in the U.S. For example, high levels of trust in people and institutions, pursuit of equality and fairness in society and life, and willingness to pay taxes for common good are some of the Finnish conditions that don't exist everywhere. What we can do, as Jack Buckley and others suggest, is take a global look and learn from one another.

There are some concrete lessons that American educators and policymakers could learn from Finland. Since standardization has become one of the principles in American education policy, I would suggest that rather than over-standardize teaching and learning in schools by prescribed curricula and frequent high-stakes testing, three other aspects of education should be standardized instead.

First, a universal standard for financing schools, so that resources are channeled to schools according to real needs. This is essential in order to enhance equity and quality in American education.

Second, a universal standard for time allocation in schools, allowing pupils to have a proper recess between classes and a balanced curriculum among academic learning, the arts and physical education. 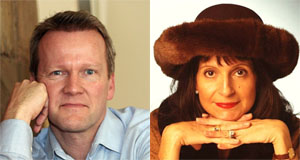