Prepare yourself to meet your new favorite food truck, except don’t expect to get any savory treats from this mobile operation.

Launched in March, Finnegans "Reverse Food Truck" hopes to collect $50,000 in food and donations over the course of seven months by riding around Minnesota in a bright green vehicle and collecting non-perishable items, cash and credit card donations to help the hungry, according to the company’s website. 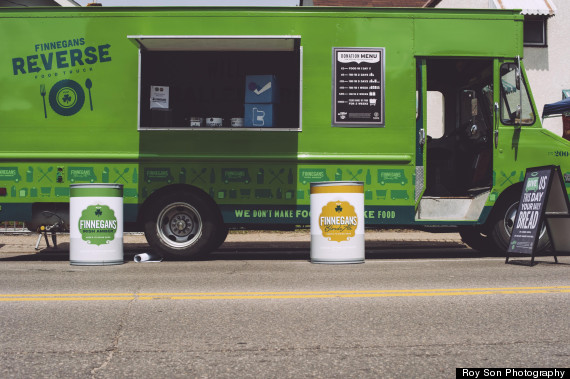 The concept is a natural fit for the beer company whose mission is to help people in need.

Finnegans has two beers available –- a blonde ale and an Irish amber –- and 100 percent of profits go toward feeding the hungry in the areas where its drinks are sold, according to its Facebook page.

The beers are available in restaurants and liquor stores exclusively in Minnesota, North Dakota, South Dakota and Wisconsin, and the company has made a sizable impact since it was established 14 years ago.

Finnegans has raised more than half a million dollars and donated 91,000 pounds of produce, ABC News reported.

The food truck is expanding the company's donor pool by giving people the chance to contribute, without having to buy a beer, Angie Lee, marketing coordinator, told NPR.

Whereas most menus tell you how much an entrée is going to cost you, Finnegans’ food truck menu spells out how your donation will help people in need.

The food truck is keeping supporters abreast of its whereabouts via social media.

Check out grills and donate! Collecting donations till 5 at @@mnmomag's #grillfest! http://t.co/L9UuYGYbg9

While some passersby are often confused when they first hit up the food truck, they usually walk away feeling pretty satisfied with the vehicle’s mission.

"They'll try and order a hamburger or a taco and we say 'No, we're actually taking food,'" Lee told NPR. "And then they're like, 'Oh my gosh, this is the coolest thing ever.'"

Get even more updates from Finnegans Reverse Food Truck on Facebook and Twitter and find out how you can contribute here.