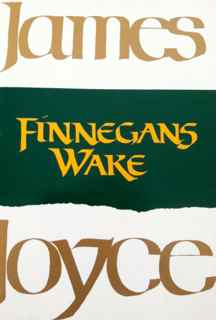 "I think my life began with waking up and loving my mother's face: it was so near to me, and her arms were round me, and she sang to me." George Eliot from Daniel Deronda

In our Highbridge apartment in the Bronx there were hardly any bookshelves to speak of. My father liked to read but I don't ever recall him lost between the pages of anything more complicated or literary than the novels of John O'Hara. My older brothers, to the best of my knowledge, only read what they were assigned in school. My sister, closest to me in age and who now reads more than all of us put together, was a good Catholic girl devoted to Nancy Drew. My early tastes were wed to Tom Sawyer, Huckleberry Finn, Robinson Crusoe and Thor Heyerdahl's Kon-Tiki. My father was a Congressman and these books were sent to me by his secretary in Washington from the Library of Congress, and the act of reading has been something special ever since. 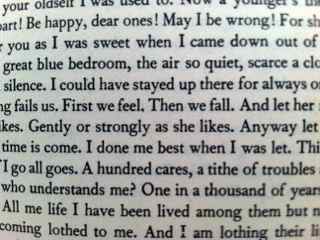 But one of the few books in our library, if you could call it that, a line of volumes unable to fill a lone shelf in the living room partly hidden behind an easy chair, was a first American edition of Finnegans Wake published by Viking in 1945. I remember looking at it out of curiosity, knowing nothing at all about Joyce, when I was eight or nine-years-old. It stood out from the other books adorned with more romantic covers and titles. And I remember leafing through it, lying on the floor, and finding it absolutely nonsensical.

A mystery I've never been able to solve is how did it get there? Who bought it? Who might possibly have tried to read it in that household? The only person I can think of is my mother. She had gone to college in an era when not all that many women did. But I knew nothing then, and to this day know nothing about her literary tastes.

In my adolescence and early twenties I used the Wake as a prop, often successfully, with which to impress people. It was only later, as a challenge to myself, living up in the mountains south of Granada, Spain that I forced myself to get through it with the help of auxiliary texts. I have never regretted it. It is still my opinion that the last pages of Finnegans Wake are among the most beautiful ever written in the English language. 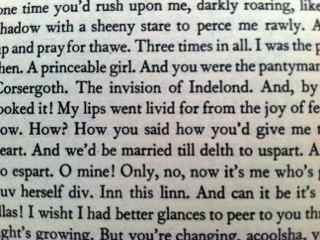 It took seventeen years to finish, has a circular form - the last sentence is continued by the first - and it employs a repetitive, Giambatista Vico inspired, four-stages-of-history notion. Many believe it was written to be read aloud. Joyce spoke seven languages and had a working knowledge of eleven more, all of which he employed to create pun-compacted words whose manifest meanings are often only clear thanks to a phonetic similarity to their closest English equivalents.

Joyce once described Ulysses as his book of the day and Finnegans Wake his book of the night, written in 'dream-speak.' It is for this reason that much of it is, frankly, and famously, unintelligible. But in a gratifying concession to linearity, its language does become somewhat clearer towards its 'end.' As it wakes up, regaining consciousness, repression exerts its editorial function and the language pulls itself together. As in Ulysses, it is the book's main female protagonist, in this case Anna Livia Plurabelle, who brings the tale to its conclusion, its 'fin-again', before it begins anew. 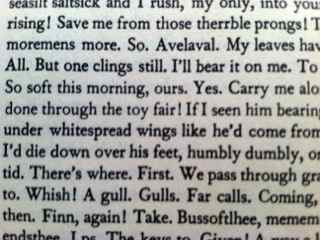 Did my mother buy this book? Perhaps someone gave it to her as a gift? It was not inscribed until I put my own name in it when I turned twenty. It is one of the few objects from my childhood I've managed to keep. I suppose ascribing its presence in the Bronx to my mother has been part of an idiosyncratic campaign to create the sort of parent I wish to remember having. It's as if, being the youngest and oddest one in my family, and given her early demise with so few real memories of her, I have tried retrospectively to fashion an ally. 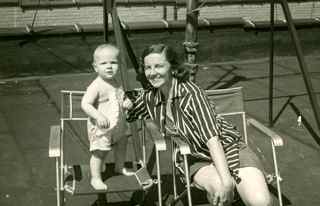 Like all of the characters in Finnegans Wake Anna undergoes many transformations. In the magisterial final pages she becomes the River Liffey that runs through Dublin just before it empties into the Irish Sea. The four stage cycle in play here is that of rivers in general which start in the highlands, flow down and out to sea where they mix with the ocean's salt, and then rise up as mist into clouds that are blown back over the land where the moisture condenses and falls as rain seeping into the earth again to make its way back to the river's source. Anna speaks in a tone of regret, a tone of remorse and nostalgia, mourning the past, an Irish tone if ever there was one. But it is a most appropriate tone well paired to a beautiful definition once annunciated by the late Joseph Campbell:

'Modern romance, like Greek tragedy, celebrates the mystery of dismemberment, which is life in time. The happy ending is justly scorned as a misrepresentation; for the world, as we know it, as we have seen it, yields but one ending; death, disintegration, dismemberment, and the crucifixion of our heart with the passing of the forms that we have loved.'

This also brings to mind the haunting words spoken in the Hebrew service when sitting Shiva: "A final separation awaits every relationship, no matter how tender. Someday we shall have to drop every object to which our hands now cling."