There's a name that's becoming as ubiquitous in dirty oil politics as Coke cans are in greasy spoons. And it's pronounced like the soft drink, but spelled Koch. 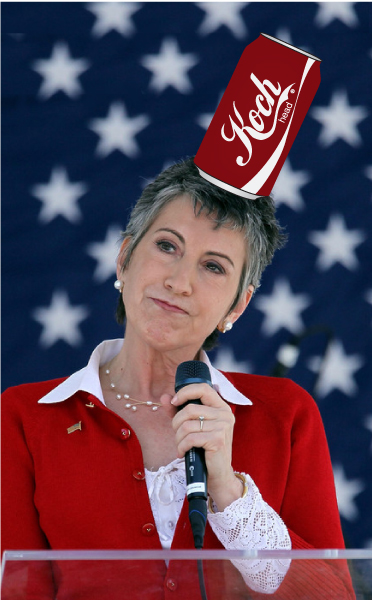 David and Charles Koch are the oil and gas tycoons sponsoring a fundraiser for US Senate candidate Carly Fiorina at the Republican Senatorial headquarters in Washington, DC on Thursday.

The oil bros influence over the development of the Tea Party and GOP politics for decades was exposed recently in The New Yorker. The Koch brothers' story is a frightening tale about how a stealth power grab by right wingers can develop a populist face for a corporate establishment movement.

Is it any wonder that Fiorina, the California US Senate candidate challenging Barbara Boxer, endorsed Proposition 23, the repeal of the state's landmark greenhouse gas emissions caps also financed by a cool million from the Koch brothers?

The Koch addiction is becoming a household brand in dirty politics in America. The family's money is fueling the new threat of a return to Reagan-Bush deregulation at the heart of the Tea Party's agenda.

It's high time those with the Koch Addiction wore the brand on their forehead. This family's got one thing in mind -- turning the reins of government over to those who would turn back the clock on government regulation of polluters by decades.

Jamie Court is the author The Progressive's Guide To Raising Hell and the president of Consumer Watchdog, which sponsors Oilwatchdog.org