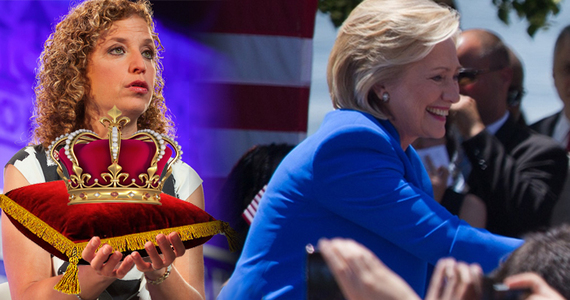 It's increasingly clear that Debbie Wasserman Schultz, Chair of the Democratic National Committee, isn't acting as a neutral party Chair, trying to insure a fair and democratic primary and building the Democratic Party in the states.

Rather, she's acting as a shill for Hillary Clinton, doing everything in her power to ensure that no one will effectively challenge Hillary's coronation as the nominee.

Wasserman Schultz is committing political malpractice and should be removed.

Remember that Wasserman Schultz was National Co-Chair of Hillary's 2008 Presidential campaign against Barack Obama and has been a loyal Clinonista. Her actions throughout the campaign have made it clear that she's misusing her position as party chair to serve as a campaign operative for Clinton and not a representative of the entire party

Her latest travesty is being prosecutor, judge and jury, imposing the death penalty on Bernie Sanders' campaign for, at worst, a minor misdemeanor which hasn't even been proven.

On Thursday, Bernie Sanders had the best day of his campaign, receiving the endorsement of the 700,000 member Communications Workers of America, the grassroots Democracy for America, and surpassing 2,000,000 individual contributions.

On Friday, Wasserman Schultz suspended the Sanders campaign's access to its own data in the DNC database, making it impossible for the Sanders campaign to contact potential voters only weeks before the crucial Iowa Caucuses and New Hampshire primary. As I write, the Sanders campaign has been forced to go into Federal Court to get back its data, creating a fight that can only hurt the Democratic Party.

Sanders' offense? A breach in the DNC's voter database managed by a private contractor hired by Wasserman Schultz, which allowed a handful of Sanders campaign staff to get a peak at Clinton voter data for two hours. There's no evidence that they did anything untoward with the data and the breach was quickly closed.

No matter. Wasserman Schultz crippled the Sanders campaign and virtually invited the press to question Sanders' honesty and integrity at Saturday's Democratic debate. Few doubt that Sanders is one of the most honest politicians in the nation. But Wasserman Schultz managed to pour dirt over him.

And speaking of the debate, why did Wasserman Schultz schedule it for the Saturday night before Christmas, at one of the least-watched times on television, virtually guaranteeing low ratings?

As I previously wrote, the DNC under Wasserman Schultz wants to guarantee that as few people as possible actually watch the Democrats' own debates!

Hillary's campaign wanted as few debates as possible to prevent her lesser-known opponents from getting free television exposure. DNC limited debates to six, compared to 26 in the 2008 campaign that nominated Barack Obama, and 12 Republican debates this campaign season.

Wasserman Schultz may think she's protecting Hillary by denying her Democratic opponents the chance to be seen by more voters. But whomever the Democratic nominee is, she's guaranteeing that during this primary season, far more people get to hear the Republican message than the Democratic message. The Republicans have used the debates to ramp up the fear factor in the American public, which is likely to help them in the general election, even as the Democrats have largely remained on the sidelines and Obama's approval ratings have plummeted.

And if Hillary wins the nomination but Bernie's millions of supporters feel he's been treated unfairly, many will stay home on election day, making it more like the Republicans will win.

Wasserman Shultz's strategy of putting her heavy thumb on the scales to help Hillary is almost as bad as the Republican strategy of suppressing the vote.

UPDATE 2: Robert Reich has a petition up on Democracy for America demanding that Debbie Wasserman Shultz restore the Sanders campaign's access to it own voter data. Click here to sign.