A brush fire erupted Friday afternoon in the Sepulveda Pass near the Getty Center in Los Angeles, ABC reports.

The fire is located on the east side of the 405, and firefighters are working to keep the fire away from the nearby Bel Air estates. There have been no home evacuations at this point, although they may begin soon.

The first and main fire started at the base of a hill at about 3:30 p.m. and traveled quickly uphill. It then crested the hill and burned downhill towards upscale homes along Casiano Drive. Some nearby residents started packing up their belongings.

All freeway lanes currently remain open but Sepulveda Boulevard is closed both ways. The offramp to northbound Getty is also closed. Traffic in both directions is slow, at about five or 10 miles an hour.

The area experienced a record-breaking temperature at 102 degrees today. The weather is dry, but luckily wind is light. Shortly after the first fire began, a second and third fire erupted, although both appear to be under control. The second fire was a smaller fire near a home's backyard. The third fire was caused by a blown transformer.

The main fire is estimated to have covered about 70 acres, and there are about 300 firefighters from the LA City, LA County, Santa Monica and Culver City fire departments on the ground, according to the Daily News. Super Scooper planes and water-dropping helicopters are dropping thousands of gallons of water from the ocean and nearby Stone Creek Reservoir onto the flames. The cause of the first and second fire is unknown.

Fire crews used the address of actor Jack Nicholson's 3,303-square-foot house, in the 12800 block of Mulholland Drive, as a command center base for a few hours, Patch reports. Nicholson has owned the house since 1969, and it is reportedly where director Roman Polanski allegedly had sex with an underaged girl.

A large billow of smoke can be seen from Century City to Santa Monica. The Getty Center is closed for the rest of the day. See photos below.

UPDATE: At 5:15 p.m., a fire official told ABC that water drops had helped firefighters gain control of the fire. He speculated that they would be fighting the fire for at least a couple more hours.

At 7:05pm, most of the fire appeared to be contained, reports the Los Angeles Times. Firefighters expect to have the fire completely under control by Saturday morning. 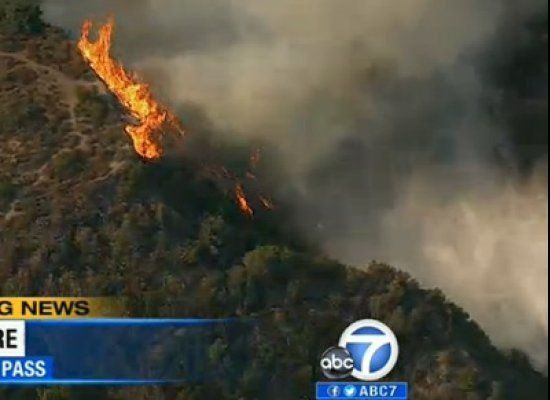