Winters are long, cold and dark in Willow, Alaska, 70 miles north of Anchorage. The temperatures on the coldest days dip to -55 degrees. The nights on the shortest days last a bleak 22 hours. "A far cry from the rough and tumbleweed Texas where I was born," says Les Brake, a resident since 1984. "Winter is so brutally cold for so long that the woodshed is bigger than our house." 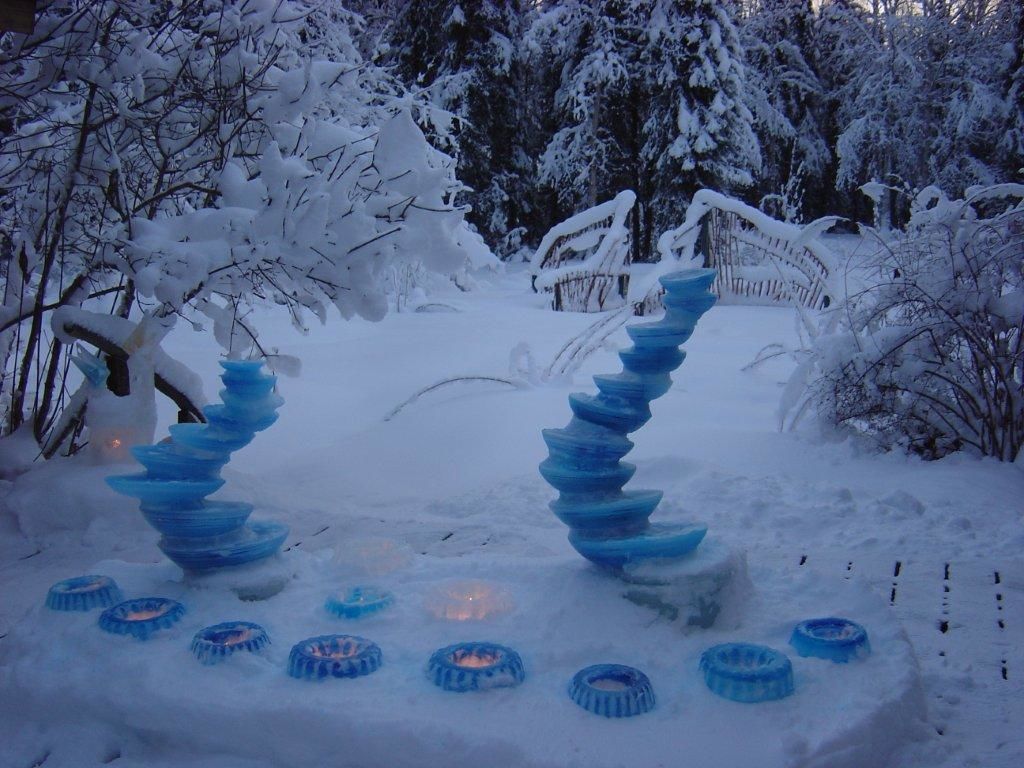 Instead of feeling lonely living in a one-room cabin at the edge of a national forest, miles from the nearest neighbor, Les Brake lights up winter's darkness with "fire in ice," which make the winters look warm and cozy. His light show brings visitors from miles away. 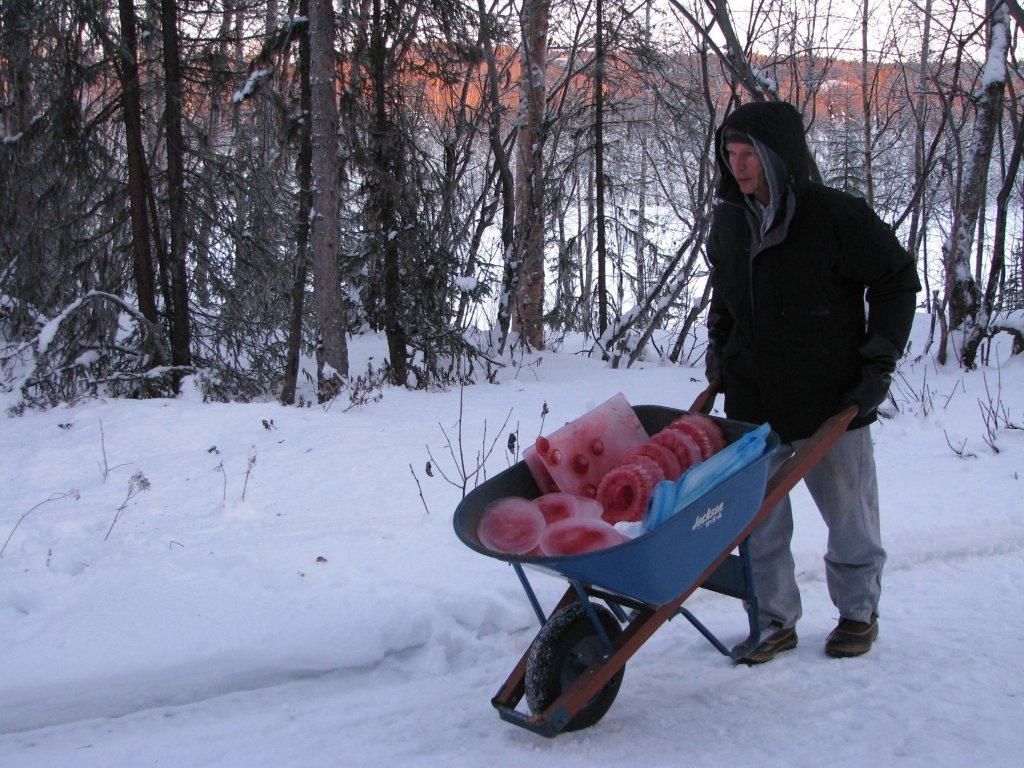 Each winter Blake makes more than 100 ice sculptures lit from within by candles. Ordinary objects -- bowls, bunt and cake pans, plastic bags, plastic food storage containers, milk cartons, coffee cans, kitty liter boxes and ice cube trays -- are his molds. Colored ice cubes are frozen into other molds to add depth and texture. He found a plastic moon-shaped platter and another diamond-shaped tray at thrift shop, and he brings those out yearly. He hangs up plastic bag outside and pours water in. When he removes it from the mold, it has the shape of a flame.

The molds are lined up outdoors on the porch and Blake totes a watering can to fill them up. Once the forms are partially frozen, he adds a few drops of food coloring. The color would be too even without the interesting patterns if he simply added it to the water. Initially, he only mixed in blue food coloring since ice often has a bluish cast. In later years he added every imaginable color, even yellow despite the jokes about yellow snow.

A plastic moon-shaped platter is the mold for a large crescent ice lamp. Bowls that resemble flower petals are formed in a five-gallon bucket. It is tipped on one side and frozen, then turned and frozen again. This technique is repeated until petals of ice top the bucket. 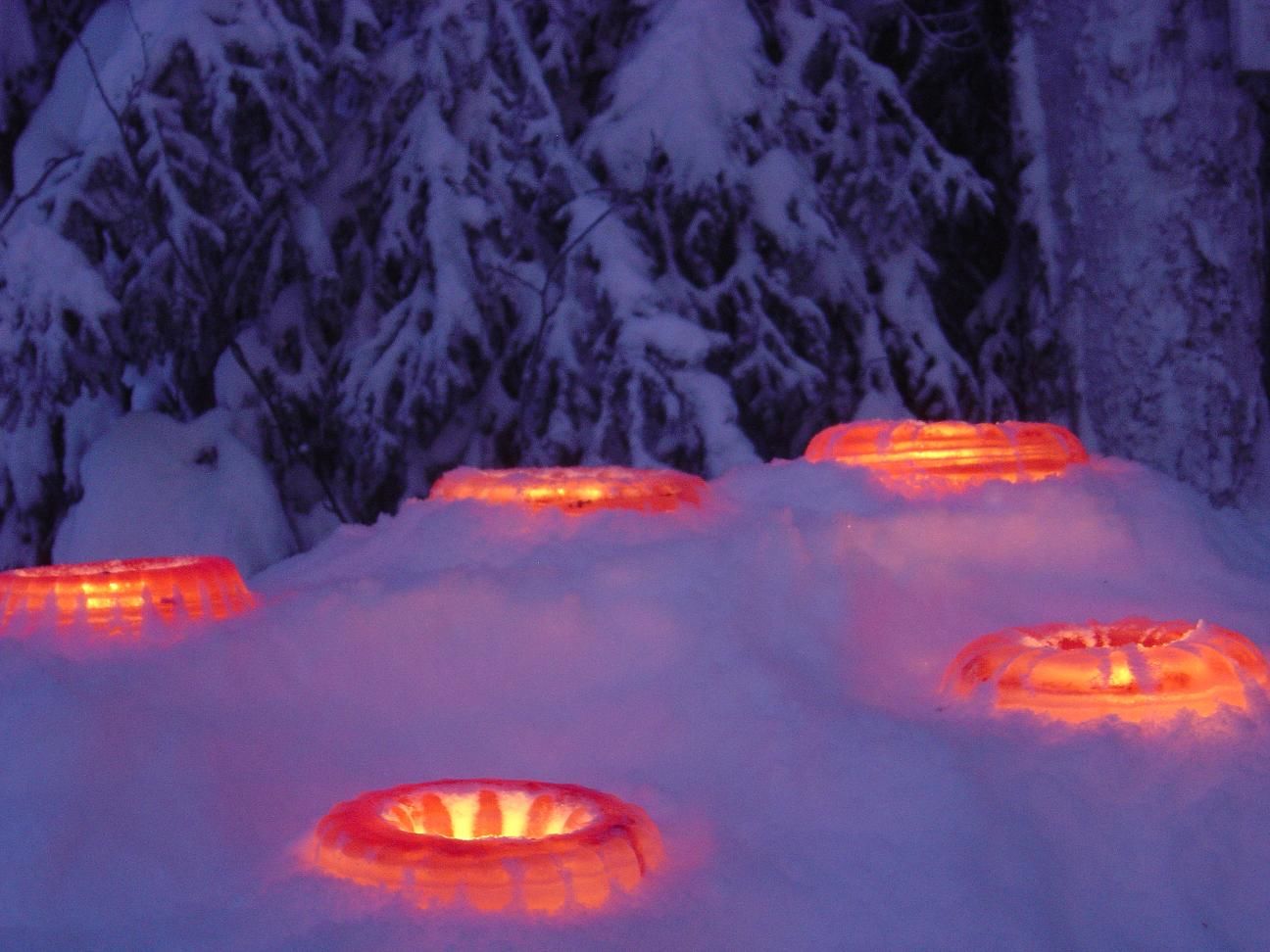 Each winter brings new, and more elaborate designs. Snow is the glue that holds his shapes together for his more elaborate designs. Blake now names many of his larger sculptures: "Dirty Dishes" is a pile of blue ice bowls precariously teetering on top of each other. "Moon Rocks" is another grouping of red ice wreaths that have an unearthly glow. They were shaped in bunt pans.

Incredibly, a visitor asked him where he got the mold for icicles. He breaks them off of his barn, pushes them upside down into a mound of snow and pours on a little water so they freeze in place.

If there is a secret behind Blake's success, it is his method of unmolding the ice without having it crack. He brings each mold indoors and sets it on the kitchen counter where it slowly melts for approximately a half-hour, until it easily slides out on its own. Running hot water over the molds to loosen the ice melts them the sculptures fast and they often crack.

In the course of a winter, Les can burn more than 600 candles. He relights them every day and blows them out when he goes to bed. Backing up to a wilderness, he is always on the alert for any roaming wild animals when he ventures out, even on his deck. 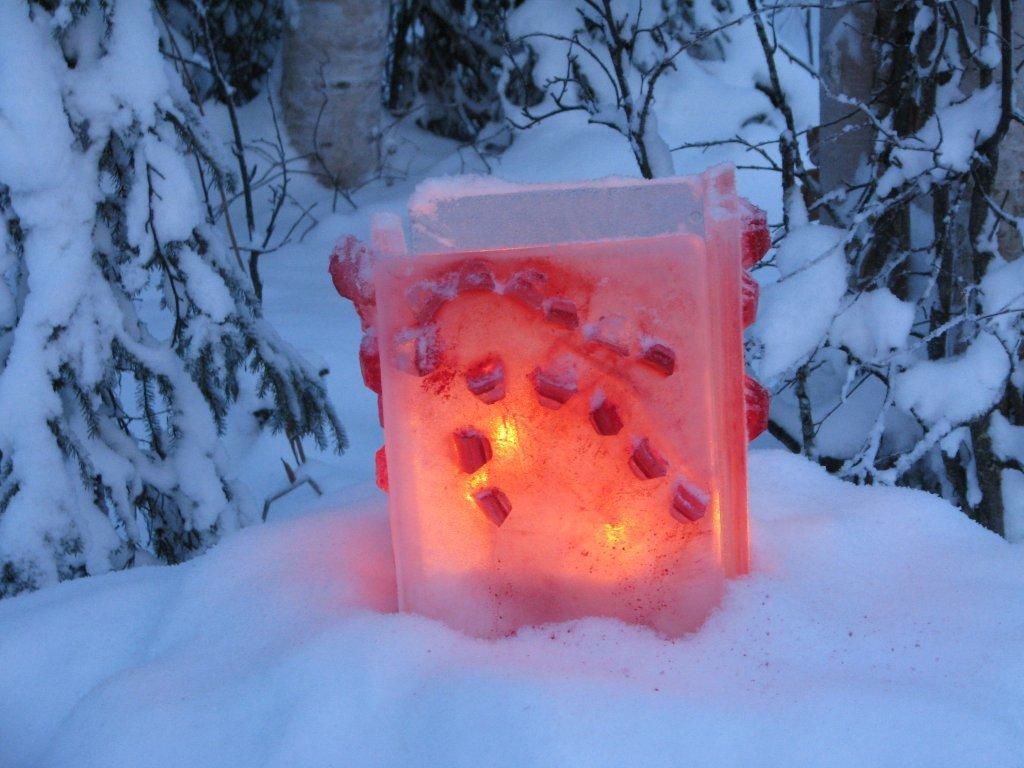 Since the ice and fire show is something the town looks forward to, Les starts making his sculptures in mid-November and continues right up until Christmas, sometimes even into January. If he is lucky and the winter temperatures hold, the ice art lasts the whole winter. In 2005 he lost a bunch when a pineapple express blew in on Jan. 2 with rain and warm temperatures. But nothing stops Les, although it might slow him down a bit. Melded to Les the gardener and ice artist, is the Alaskan frontier spirit. It buoys him beautifully through all kinds of extreme weather.