By declining their invitations Afghanistan, Algeria, Egypt, China, Cuba, Iraq, Iran, Kazakhstan, Morocco, Pakistan, Russia, Saudi Arabia, Sri Lanka, Sudan, Tunisia, Venezuela, and Vietnam declared their rejection of the Nobel Peace Prize choice: the heroic Chinese human rights defender Liu Xiaobo. Serbia also declined but at least was forthright in explaining that China is too important for them and that is why they were absent--due to Beijing's unprecedented diplomatic bullying. 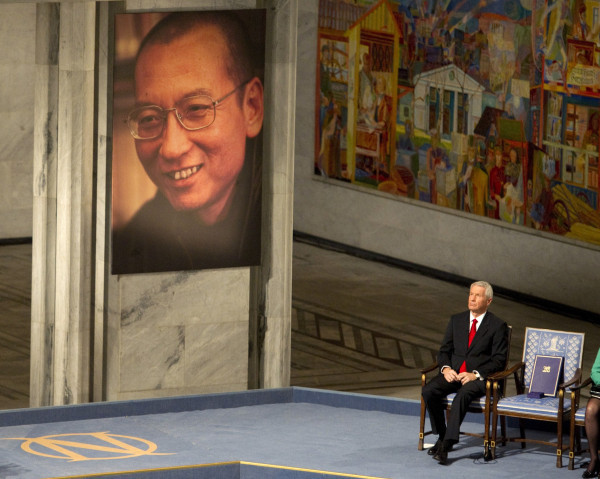 The ceremony was conducted in Oslo's City Hall in front of an empty chair.

When asked, Nobel Committee Secretary Geir Lundestad was not able to think of "any example where a country has so actively and directly tried to have ambassadors stay away from a Nobel ceremony." After first requesting, by diplomatic letter, that all sovereign nations avoid the December 10th event, China went so far as to threaten "consequences" if governments showed support for Liu by attending. The warnings worked. More governments abstained from this Nobel ceremony than any other in history. Beijing's most extreme attempt to distract attention away from today's ceremony was the bizarre creation of the "Confucius Peace Prize" awarded yesterday. It seems unlikely that Confucius would sympathize with a government that has now joined Burma, the Soviet Union, and Nazi Germany as one of the four countries to ever prevent a winner from accepting the Prize. China's much-publicized campaign to derail the ceremony only explains half the story of the group of nations that avoided the event. Like Beijing, which calls Liu a "criminal" and considers the Nobel Committee a group of "clowns," the aforementioned governments have little reason to celebrate Liu's lifelong struggle for freedom and justice. Some lining up on the Chinese dictatorship's side went public with their sentiments. The Cuban regime reduced the Prize decision to an "ideological broadside", while Venezuela's Hugo Chávez attacked Liu as a "dissident counter-revolutionary."

Sadly, the U.N. High Commissioner for Human Rights did not attend, as Navanethem Pillay declined the invitation with the excuse that she never received one. Pillay was, in fact, invited and I confirmed this with the person who was in direct email contact with her office.

Pillay hosted World Human Rights Day at U.N. headquarters at the same time as the Nobel ceremony. Pillay's deer-in-headlights response was that she couldn't disappoint the human rights defenders she invited to Geneva by traveling to Oslo. And Secretary General Ban Ki-moon did not attend as he headlined a similar U.N. event in New York.

And what did they discuss at their World Human Rights Day events?

Was it the rights of women in Iran?

Was it the political prisoners of Burma?

Did they address the world's dictatorships and how to aid dissidents?

Did they expose the lack of press freedom in Russia?

Surely they addressed modern slavery in sub-saharan Africa and the Middle East, no?

Strange that U.N. decision-makers would opt to take media attention off of Liu's ceremony by hosting their own simultaneous events. Why not honor World Human Rights Day alongside Liu's defenders? Why not say a word about a man who embodies the daily struggle of more than a billion people?

Whatever the explanation, it is disappointing that U.N. leadership allowed the organization to line up alongside the dubious list of countries that boycotted the Nobel ceremony.

Given China's aggressive campaigns against them, Liu and the world's other prisoners of conscience could have used the support.

In Oslo last night one of Norway's leading human rights defenders, Jan Tore Sanner, a member of parliament, delivered a breathtaking speech at a reception for those of us that attended as guests of Liu Xiaobo's wife, Liu Xia--who could not join us because she is under house arrest in China. 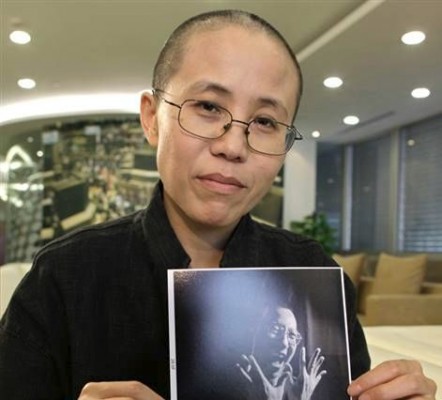 Liu Xia, the wife of Chinese dissident Liu Xiaobo, holds a photo of her husband. Although some of us attended as her guests, she could not join us because she is now under house arrest.

Sanner cheerfully welcomed us and lamented: "Our joy, however, is tempered at the thought that tomorrow's ceremony will be conducted in front of an empty chair in Oslo City Hall. Tomorrow evening, when the traditional parade reaches the Grand Hotel, the balcony where the previous Peace Prize winners have greeted the parade will be dark and empty. Liu Xiaobo will not be there. His family will not be there. His friends and lawyers are forbidden to travel.

"In its reaction to the award to Liu Xiaobo, the Chinese regime reveals its true nature, and demonstrates why this award is so deserved, and so necessary... We must not let great powers escape the call to respect human rights and foster democracy. We must not turn a blind eye to the abuses out of fear of economic and political consequences.

"Václav Havel, who Liu himself considers an important inspiration, has said: 'Who else but us who live in freedom should speak up for the rights of those who are not as fortunate?'

"The choice of Liu Xiaobo for the 2010 Nobel Peace Prize places him in a long line of peaceful, patient, but nonetheless principled fighters for the basic human rights of human beings to be respected by their governments: Shirin Ebadi, Aung San Suu Kyi, Andrej Sakharov, Martin Luther King, Jr. and others who have been honored by the Nobel Committee for their work in human rights."

If only the world had more politicians like Jan Tore Sanner and more human rights defenders like Liu Xiaobo.

It is freezing in Oslo right now but the flame of freedom is roaring and China is feeling the heat.