In 2011 the heart and soul of gay oasis Fire Island Pines, the legendary dance club Pavilion, was destroyed in a fire. But never fear; like a Phoenix rising from the ashes, the Pavilion is returning with a vengeance thanks to architecture team of the moment HWKN.

HWKN, the team behind MoMA PS1's eco-friendly installation Wendy, are known for their innovative and uber-hip designs. To learn more about the long-awaited cultural gem, we reached out to lead architect Matthias Hollwich to learn more. (Scroll down for interview.) 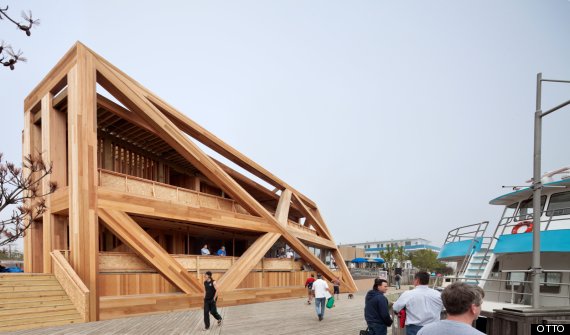 HP: What was your personal experience with Pines Pavilion before you got involved with this project?

MH: When I was a student I would take field trips to Fire Island -- no hotel, no booking, no plan. I would go into the pavilion and hang out all night, into the morning and take the first boat back into the city. It was such a memorable experience. The pavilion was at the core of a very social community.

HP: Were there aspects of the pavilion that were unsatisfying even then?


MH: There were three iterations of the pavilion. The first was built in 1985 and it remained until 2002, I believe. That is the pavilion that, when mentioned, brings back glowing eyes and the most amazing memories. It was a very informal space with open circulation so you could wander around and never be bored.

The second iteration of the pavilion, in my opinion, really made everything wrong that can be made wrong. They tried to maximize all the usable space, so they put in a supermarket on the ground floor. There were no windows so it was all dark. You had to squeeze up the stairs, it was not fluid, it was not inviting. The interior was like a place in Chelsea; it didnt have the soul of Fire Island -- the openness and lightness.

HP: Why were those changes made in the first place?


MH: The building before was old -- seventeen years old, I think -- and they wanted to make it better. The problem is, if you forget the heritage of the place it can go awfully wrong. They wanted to create this very efficient, sanitized space.

HP: What buildings or architects inspired your pavilion?


MH: For this building in particular the community inspired us. It was the act of going into those houses and feeling how inviting people are, feeling what a social engine it is. All of that really inspired me to bring a much more social and informal feel to the building that I feel is in its DNA.

HP: How would you describe the feeling of the space?


MH: It is a masculine space in that it has a very strong presence, I guess it's kind of manly. [Laughs] Perfect for the gay community. It is also inviting, intriguing, curious -- people will want to be part of the building itself. We wanted to integrate the design into the environment of the pines -- all wood everywhere. We also left out a lot of finishes; for example we exposed the ceiling to be more true to the construction technique, to let the structure be itself and speak for itself. You can see the nature of the wood itself, which we have been so unfamiliar with in our recent years.

There is this kind of honesty and modesty in the space, so that people immediately feel comfortable with the building. When you see this perfect, beautiful sculpture you like to look at it but you are maybe afraid to touch it or go inside. We want exactly the opposite. There is a lot of personality and we want people to become friends with the architecture itself. With the space we want to make it easy to break the ice between people, to free them to make new relationships.

HP: How do you balance what is hip now with what will appeal to people in the future?


MH: In our firm we dont like to be trendy, but we like to explore the future of architecture. A novel design becomes a point in time in architecture but it remains relevant forever. Like, the Seagram Building in New York is still one of the most modern buildings there is, even though it was built in the 1950s. It's not just picking and choosing what is trendy right now; it goes way beyond fashion.