It's bad enough seeing the heartbreaking and unending pictures of oil-drenched birds, dead sea turtles and porpoises. But reading Tim Dickinson's Rolling Stone article about the BP blowout and Pres. Obama and his administration's part in allowing it to happen just makes the carnage even more unbearable to view. Interior Sect. Ken Salazar's role in allowing the horror to manifest is clearer now than ever. He didn't do his job. He put oil companies ahead of protecting our country's resources and the BP blowout is the result. It's time for Pres. Obama to fire Ken Salazar.

The news just keeps getting worse.

Three days after the explosion of the Deepwater Horizon in the Gulf of Mexico, the Dutch government offered to help.

It was willing to provide ships outfitted with oil-skimming booms, and it proposed a plan for building sand barriers to protect sensitive marshlands.

The response from the Obama administration and BP, which are coordinating the cleanup: "The embassy got a nice letter from the administration that said, 'Thanks, but no thanks,'" said Geert Visser, consul general for the Netherlands in Houston.

Now, almost seven weeks later, as the oil spewing from the battered well spreads across the Gulf and soils pristine beaches and coastline, BP and our government have reconsidered. 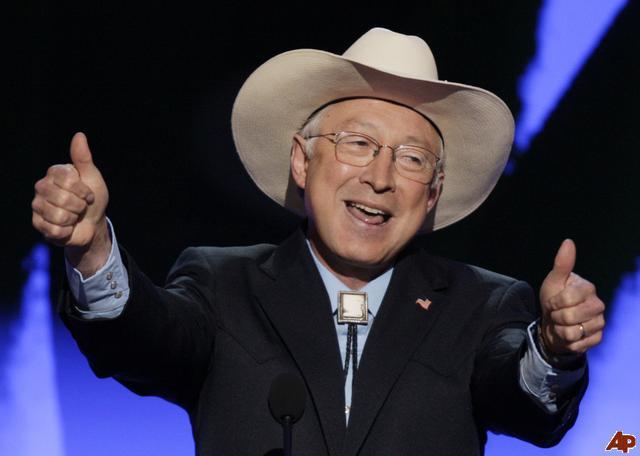 There are dead birds on the White House lawn and someone has to pay.

Interior Sect. Ken Salazar isn't the only one to blame in this nightmare of incompetence and leadership collapse, but he deserves to be the fall guy, because his lack of leadership at the Interior Dept. is the catalyst that exploded this ecological and economic nightmare.

"If you have 1,000 dead birds that you've collected, you have 10,000 that have died and sunk off shore. ... There's a massive bird kill, sea turtles, porpoises that haven't even been calculated, so this thing is enormously impactful and devastating." - Rick Steiner, Marine Conservationist (on "Countdown")

How can anything live in this water? Nothing can. That's what is left when you shut down all the noise, PR buzz, and White House spin. The only other thing left in the open is that a Democratic administration let it happen.

Ronald Reagan had James Watt at Interior, and Barack Obama has Ken Salazar. So at least it now makes sense why candidate Obama invoked the environmentally disastrous presidency of Reagan. Meanwhile, the president outsources his job of leadership thinking that because he wasn't the one at the helm of the agency responsible for stopping the horror before it happened, or in charge of the ultimately foreseeable catastrophe management, he won't get touched. It's how teflon presidencies are made.

BP is the last oil company on Earth that Salazar and MMS should have allowed to regulate itself. The firm is implicated in each of the worst oil disasters in American history, dating back to the Exxon Valdez in 1989. At the time, BP directed the industry consortium that bungled the cleanup response to Valdez during the fateful early hours of the spill, when the worst of the damage occurred. Vital equipment was buried under snow, no cleanup ship was standing by and no containment barge was available to collect skimmed oil. Exxon, quickly recognizing what still seems to elude the Obama administration, quickly shunted BP aside and took control of the spill. The Spill, the Scandal and the President - Rolling Stone magazine

I have been railing about BP being left in charge for several weeks. By talking and listening to oil experts it was obvious that no one knew what they were doing or worse, they knew what was happening and didn't want to let the public in. I have been saying for several weeks that BP should never have been left on point. Rolling Stone confirms what I'd learned and had been saying all along, while some people think it's more important to play partisan politics or appease their audiences than state the facts. Truth has only one side and it's transparent. Folks, we are drowning together and no one wants to admit the crude is up to our necks.

It's tempting to believe that the Gulf spill, like so many disasters inherited by Obama, was the fault of the Texas oilman who preceded him in office. But, though George W. Bush paved the way for the catastrophe, it was Obama who gave BP the green light to drill. [...] People are being really circumspect, not pointing the finger at Salazar and Obama," says Rep. Raul Grijalva, who oversees the Interior Department as chair of the House subcommittee on public lands. "But the troublesome point is, the administration knew that it had this rot in the middle of the process on offshore drilling - yet it empowered an already discredited, disgraced agency to essentially be in charge." - The Spill, the Scandal and the President - Rolling Stone magazine

This environmental 9/11 lies at Pres. Obama's feet and it doesn't matter how hard he tried to distance himself. His presidency is now oil slicked.

On the campaign trail, Obama had stressed that offshore drilling "will not make a real dent in current gas prices or meet the long-term challenge of energy independence." But once in office, he bowed to the politics of "drill, baby, drill." [...] Undeterred, Obama and Salazar appeared together at Andrews Air Force Base on March 31st to introduce the plan. The stagecraft was pure Rove in its technicolor militaristic patriotism. The president's podium was set up in front of the cockpit of an F-18, flanked by a massive American flag.

You know that Jon Stewart bit where he made fun of Pres. Obama doing all those sports events while oil gushed into the Gulf?

The president himself was occupied elsewhere. After returning from his vacation, Obama spent Monday, April 26th palling around with Derek Jeter and the New York Yankees, congratulating them on their World Series victory. He later took time to chat with the president of Honduras. When he put in a call to Gov. Haley Barbour of Mississippi, it was to talk about tornadoes that had caused damage in that state, with only a brief mention of the oil spill. On Tuesday the 27th, Obama visited a wind-turbine plant in Iowa. Wednesday the 28th, he toured a biofuels refinery in Missouri and talked up financial reform in Quincy, Illinois. He didn't mention the oil spill or the Gulf.

Pres. Obama doesn't own this catastrophe alone, but he will become captive of it as more and more information about the Administration's culpability, but also after their environmental nonchalance surfaces. It will be like a giant dead bird landing on the White House portico.

It's also true that at some point a president has to depend on those he appoints to do their job. Interior Sect. Ken Salazar did not, because looking out for oil companies is not what he's charged to do. Protecting the natural habitat of our great country has to come first.

The arrogance of the Democratic Party and the gullibility of voters to trust a political party who has good environmental slogans, but never delivers, is now landing with the lapping sound of ocean hitting sand with a slap, because it's not water but "snot." Watch the video and you'll understand.

The American Gulf Coast that we once knew is gone for the foreseeable future. It is very likely never to return the same.

There's now a push to get tourism down to the Gulf. "Morning Joe" will be down in Florida tomorrow. There are some places you can enjoy, I'm sure, but they won't last long, with Louisiana already in the thick of destruction.

Meanwhile, we have Sen. Mary Landrieu, Gov. Jindal and many others squealing that offshore drilling must begin again because the job and economic loss will be even greater if it doesn't. That there isn't an emergency job task force already in action for the Gulf is stunning political incompetence. Because once people understand the utter dismantling of the Gulf ecosystem, I'm not sure anyone will want to see their own state handed over to corporate oil marauders under an Administration that has no energy policy and the social conscience of Bush-Cheney.

The BP blowout and its aftermath is as bad as it gets. Pres. Obama's role in it matches it for having his only energy policy as "drill, baby, drill." But Interior Sect. Ken Salazar has been on point from the beginning of Obama's administration. He didn't heed warnings from anyone, even opening more coastline than any administration in history, while allowing the corruption at MMS, which began under Bush-Cheney to continue. He knew and did nothing.

The result of the Obama administration's political and managerial incompetence is an environmental, habitat and ecological holocaust.

Obama's first term legacy is set unless a miracle happens.

Pelican rookeries are fouled, their eggs and nests soaked in oil.

Ken Salazar has got to go.

(On Twitter: #FireKenSalazar)
Taylor Marsh is a political analyst out of Washington, D.C.