David Lynch's Twin Peaks was a thoroughly groundbreaking, mind-bending, life-altering cult hit when it first premiered 23 years ago. If you find yourself journeying around the Pacific Northwest, don't miss these iconic Twin Peaks filming locations.

"Through the darkness of future past, the magician longs to see, one chants out between two worlds, fire walk with me!" - Leland Palmer

"Where pies go when they die." - Special Agent Dale Cooper

Thompson Cafe was built in 1941 and was witness to the end of the Depression, WWII and the timber industry boom. The cafe underwent a change of hands in the '50s and became known as the Mar-T Cafe as well as a favorite stomping ground for locals and mountain travelers. In 1990, David Lynch was scouting filming locations for Twin Peaks and came upon the Mar-T and fell in love with the cafe and the Snoqualmie Valley altogether. Visitors should try the "Twin Peaks cherry pie" and their "damn fine cup o'coffee."

"There's a sort of evil out there. Something very, very strange in these old woods...A darkness, a presence. It takes many forms but... its been out there for as long as anyone can remember and we've always been here to fight it." - Sheriff Harry S. Truman

"Laura tutored my brother Johnny three times a week. Johnny's 27 and he's in the third grade. He's got emotional problems. Runs in the family." - Audrey Horn

The Salish Lodge & Spa is the location for the Ben Horn's Great Northern Hotel, and it's the quintessential Pacific Northwest retreat. Visit to see the lodge exterior as well as the Snoqualmie Falls outside (featured prominently in the show).

"Laura had secrets and around those secrets she built the fortress that, well that in my six months with her, I was not able to penetrate and for which I consider myself an abject failure." -Dr. Jacoby

This is the high school where Laura Palmer was elected homecoming queen; where Audrey Horn was tutored by Laura; where Shelly Johnson dropped out to marry Leo; and where Donna Hayward was secretly in love with James Hurley.

"For you see, the cave painting is not only an invitation... it's also a map! A map to the Black Lodge!" - Windom Earle

And if you're really hardcore you could also venture down to California and explore the entrance to the Black Lodge.

Twin Peaks left many questions: Why were the owls not what they seemed? What happened to Bob? How does one find the Black Lodge? To balance the questions, there were of course constants in the Twin Peaks universe: Nothing beats a damn good cup of coffee and a piece of cherry pie; homecoming queens have just as many "issues" as the rest of us; and we should trust questionable Tibetan detective techniques. 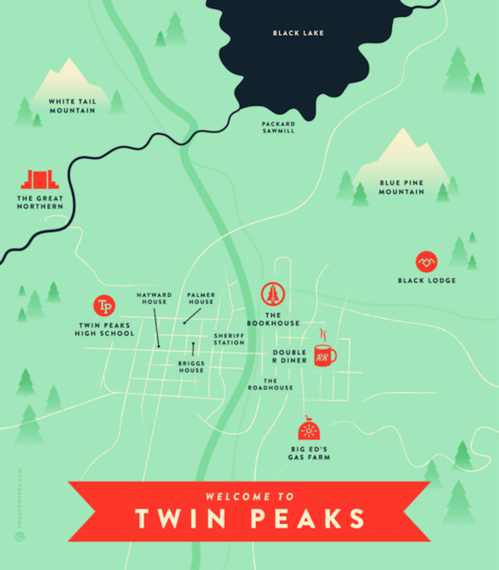 Visit Roadtrippers' Film Spotting Guide for routes and filming locations to all your favorite TV shows and movies. Hit us up on Facebook.