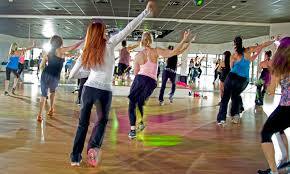 Today I took my first Zumba class. A sea of 35 eager participants was getting psyched up when the tiny teacher began the music. Latin groove and dancing beats only want to make you move your feet.

As a former ballet dancer ( a hundred years ago) it was fairly easy for me to pick up the moves and get going, not even five minutes of hesitation and my blood was pumping to the beat.

And I am so out of shape, it's not funny. I swim several times a week, but that's all I extract from my gym membership, so when my friend Rita asked me to come with her to a Zumba class, I remembered that this was something I have always wanted to try.

So off we went. The large room with wood floors was freezing at first, as far as room temperature I mean. But of course as soon as you move a little, you crave that cold air!

I was glad that no one's body was perfect, it was reassuring -- none of the participants were such fanatics of exercise that their body was showing off zero body fat. Or maybe because it was a Saturday morning and a more average crowd was here.

I took Jazzercise classes for years and this reminded me a little of the same regimen, except that Zumba shimmies more with Latin beat and stays on the floor, no jumping up and down steps like my other class was.

Hilda the teacher told me she changes the music every month, but the moves are always the same, so eventually everybody masters them and feels like a pro. That's a good thing -- it makes you belong.

Only two men and about 35 women were there today, and it seems to be a trend. One Ed was taking his second class and said his wife made him do it, but he was happy to "break the momentum of running and lifting that I usually do -- I only wish there were more guys."

The other gent among ladies, 71-year-old Hispanic Milcro, was more energetic and jumping than anybody else in the session today! 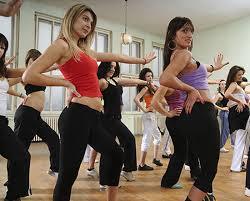 I had to stop and take a break after 30 minutes, to take notes, well, that was my excuse anyway. When one of my favorite songs "Fireball" by Pitbull came on, I joined right back in and danced the crap of that one!

I wonder if Pitbull knows how many hundreds of women wave their butts off to his song - but after all, he is Latin and would probably enjoy the class much.

Zumba is originally from Colombia, and was created by dancer Alberto Perez, using hip-hop, salsa, mambo, merengue, plus aerobic elements. The easy-to-follow choreography has allowed 15 million people to take classes in about 200,000 locations across 180 countries. 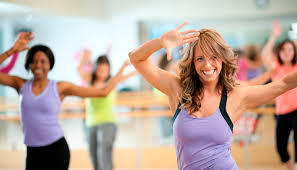 So, we're not alone! The success I am sure comes from the fact that everybody likes to dance, but most don't dare or don't think they can, while in fact, if you can tie up your shoes and walk, you can probably dance! And it's not bound by age at all -- while some would never be caught dead on a treadmill, this allows for more diversity and definitely more fun.

This is also far removed from ballroom dancing, so if the steps are not totally similar to an exact salsa dance, it's on purpose, the mix of several dance moves is better for the body. You follow a fast rhythm, then quiet down to a soft sway of the hips. Until it picks up again.

And then Sonny and Cher "The Beat Goes on" takes you on a smoother and slower move that could hardly hurt anybody. La de da de de -- la de da de da.

No fancy outfit required -- leggings, tee shirt, sneakers, or tennis shoes are all one needs. After all, many women do this in clubs in tiny dresses and high heels! I was happy I went, and will definitely return!

I think offices around the world should offer Zumba sessions to their employees, and see them return to their desks with wide grins on their faces. Gloria thinks "It does not feel like exercise, it's dancing!"

I think so too.
We gon' boogie oogie oggi, jiggle, wiggle and dance!