If you happened to videotape several minutes of slow-moving, brightly lit groups of circular objects in the sky, would you post your video online right away or wait a few months to do it?

A YouTube user, named Naktis Ireland, chose the latter option, after recording odd lights over Cork, Ireland, back in December. Ireland uploaded the video on March 16, and it's only now starting to get some attention, according to Open Minds.

In the video, seen below, the bright objects keep materializing in the sky at the right, and move in formation to the left at approximately the same distance between each other, until they slowly seem to fall behind a group of trees, before another group of them appear out of thin air and do the same thing.

Many questions about the legitimacy of these UFOs are being raised by online commenters and a handful of photographic and special effects experts, who speculate on whether these are flares, balloons, lanterns or simply, unexplained.

Writing on YouTube, Ireland addressed concerns about the shakiness of his UFO video.

"I am sorry for the quality, it was filmed with a mobile phone. Ironically I had a Canon EOS 55D with 300 mm lens at home that could of filmed in 3000x3000 but I was afraid that they would disappear by the time I got my camera as this is a very rare opportunity so instead, used a phone to record as much as possible."

Whitley Strieber, best-selling author of numerous books that have been made into feature films, including 1987's New York Times No. 1 non-fiction book, "Communion," suggests the Ireland UFOs could be sky lanterns or something else.

"I am wondering if these could have been flares," he wrote in an email to The Huffington Post. "The thing that bothers me about them is that I am seeing that slow falling motion, not like something powered at all. I think that they are too large to be fireworks."

On their Unknown Country website, Strieber and his wife Anne examine this case, reaching out to some experts in the special effects, photographic and web design arenas, to try and get some clarity about the Ireland UFOs.

One of those individuals, web designer James Beeson, doesn't give credible marks for the video.

"I'm going to come down hard off the fence and cry 'foul.' This event, if real, would surely have drawn not only media coverage, but also other videos from different locations. It's a big city, it's not dark, they keep on coming (a bit like a big lantern release would) ... and very convincingly emerging from the gap between the houses."

A photographer and documentary cinematographer who prefers to be identified as "Dan" told HuffPost in an email, "It's hard to imagine that many flares being deployed over such a densely populated area. Surely it would have led to the arrest of the pilot and the revocation of his license -- or pilots, plural."

"On the other hand," Dan added, "in the preponderance of faked UFO videos, the objects tend to be perfectly composed in convenient parts of the sky relative to the camera. The only other possibility I can think of is that these could have been little remote-controlled quadcopters carrying bright lights. But these would have been seen and reported by many, so there goes my theory."

Dan also pointed out the realistic manner in which the UFO-orbs seem to "diminish in brightness and size as they pass behind the tree, lampposts and bushes. I imagine it would be possible to fake this detail only with considerable skill. So while this incident remains well inside my 'maybe' box, I'll concede, once again, that it 'could' be real."

Naktis Ireland, who originally uploaded the video, states on YouTube, "I never mentioned aliens. I said they are very bright, strange orbs that are UNIDENTIFIED witch [sic] means that I cant even say that they where [sic] lanterns because no such detail was seen. Believe what you want to believe, anything is possible." 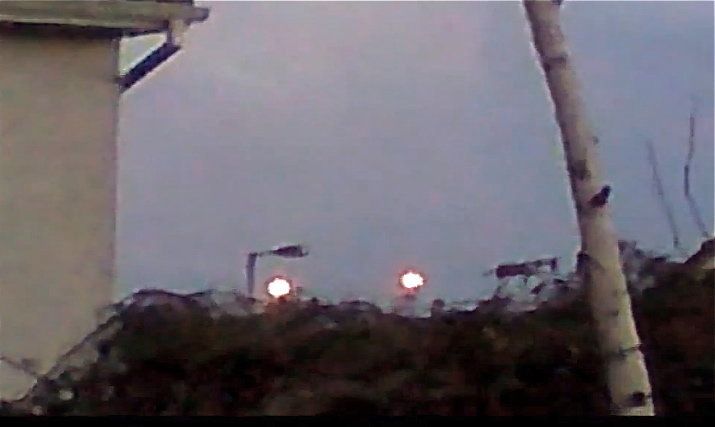 1 / 6
Ireland UFOs 1
In December 2012, a YouTube user identified as Naktis Ireland, recorded nearly three minutes of video which purported to show groups of slow-moving, brightly lit UFOs over Cork, Ireland. And yet, the video wasn't posted to YouTube until March 16, 2013. While many comments and some photo experts have weighed in on the issue, the jury is still out as to what these objects were. This slide show offers several images of the UFOs as they moved slowly across the sky before disappearing behind the bushes or the house.
Naktis Ireland / YouTube