Is it possible to fire a gun under water? You bet. Just take a look at this YouTube video posted recently by Andrew Tuohy, a former U.S. Navy corpsman who writes about firearms on his blog.

(WATCH THE VIDEO ABOVE)

The video shows a Glock 22 pistol being discharged under water--and the action unfolds in slow motion. But seeing the explosion and understanding the science behind it are two different things.

Any sort of basic explosion (like a bullet firing) requires three elements: oxygen, fuel, and an ignition source. Under water (and above water, too), gunpowder serves as the fuel and the firing pin as the ignition source. And the oxygen? It's contained within the gunpowder.

Gunpowder has its own oxidizer, a chemical compound that readily gives off oxygen at higher temperatures. As all of this is self-contained within the bullet casing, so long as the gunpowder stays dry, the bullet will fire under water, or for that matter -- on the moon.

For an explanation of what's happening after the bullet leaves the gun's barrel, we turned to Dr. Louis Bloomfield, a professor of physics at the University of Virginia:

What you're seeing is primarily a gas bubble created by the propellent gas from the bullet... The bubble essentially overexpands because of the water's outward momentum. Once that outward momentum dissipates into the pool, the no-longer-hot, over-expanded propellent gas can't fill the void and so atmospheric pressure crushes the bubble to a much smaller size.

MythBusters examined the physics of bullets entering water in a 2005 episode entitled "Bulletproof Water." The show concluded that supersonic bullets (up to .50 caliber) disintegrated within 3 feet after being fired into a pool of water from above. Slower bullets, such as those fired from pistols, took up to 8 feet.

In addition to the Glock, Tuohy told the Daily Mail he's documented other weapons firing underwater. He also shoots hollow-point bullets into the water, collecting their destroyed remains and adding gemstones to create what he calls "tactical flowers."

Both are displayed in the slideshow below [photos via Facebook]:

Correction: This article has been updated to emphasize the MythBusters episode only examined bullets fired into the water from above. 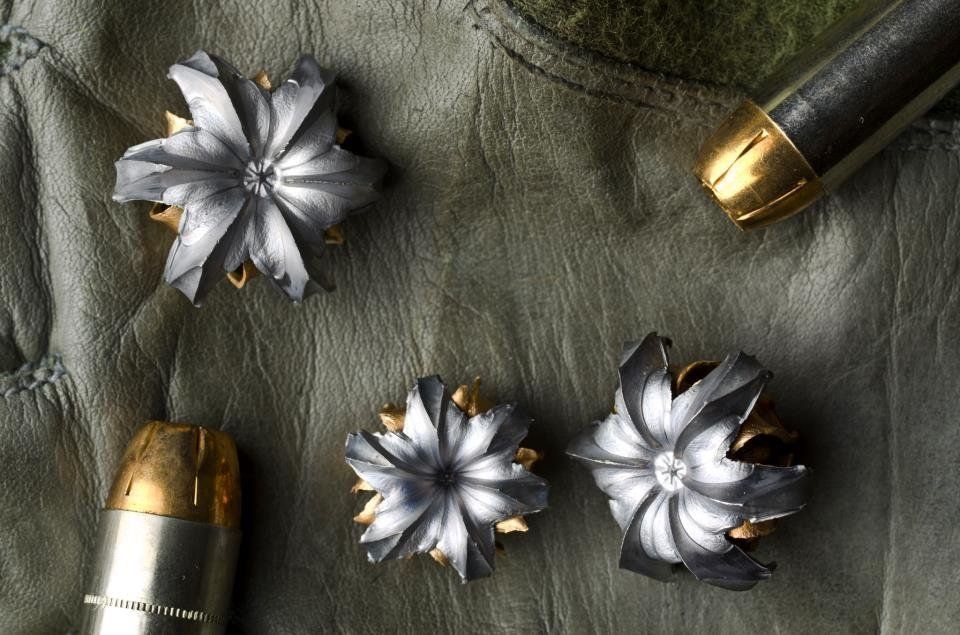