A nonprofit founded by a Silicon Valley entrepreneur has filed a sweeping, high-stakes lawsuit challenging state teacher protection laws. A victory would overturn a tenure, dismissal, and layoff system that critics blame for the hiring and retention of ineffective teachers. A loss in court could produce bad case law, impeding more targeted efforts to achieve some of the same goals.

Students Matter is the creation of David Welch, co-founder of Infinera, a manufacturer of optical telecommunications systems in Sunnyvale. The new nonprofit filed its lawsuit in Los Angeles Superior Court on Monday on behalf of eight students who attend four school districts. A spokesperson for the organization told the Los Angeles Times that Los Angeles philanthropist Eli Broad and a few other individuals are underwriting the lawsuit. They have hired two top-gun attorneys to lead the case: Ted Boutrous, a partner in the Los Angeles law firm of Gibson, Dunn & Crutcher, and Ted Olsen, former solicitor general for President George W. Bush.

The lawsuit asserts that five "outdated statutes" prevent administrators from making employment decisions in students' interest. The tenure statute forces districts to decide after teachers are on the job only 18 months whether to grant them permanent job status. Once granted tenure, they gain due-process rights that make it expensive and difficult to fire them even if they're "grossly ineffective." And then, when an economic downturn comes -- witness the last four years -- a Last In/First Out (LIFO) requirement leads to layoffs based strictly on seniority, not competency.

The protection of ineffective teachers "creates arbitrary and unjustifiable inequality among students," especially low-income children in low-performing schools, where less experienced teachers are hired and inept veteran teachers are shunted off, under a familiar "dance of the lemons" since they cant be fired. Because education is a "fundamental interest" under the state Constitution, the five statutes that "dictate this unequal, arbitrary result violate the equal protection provisions of the California Constitution" and should be overturned. The lawsuit doesn't prescribe a solution.

Students Matter's wholesale assault on the laws contrasts with fact-specific, narrowly tailored lawsuits brought by attorneys for the ACLU of Southern California and Public Counsel Law Center. Two years ago, they won a landmark victory in Reed v. the State of California when Los Angeles County Superior Court Judge William Highberger found that the heavy churn of teachers due to LIFO at three Los Angeles Unified middle schools violated students' right to an equal educational opportunity. That decision led to a settlement between the district, the mayor's office, and the attorneys that has protected the staffs of 45 low-performing schools from layoffs for the past three years. The strength of that case lay in its ability to tie specific harm to students to the layoff law, which explicitly permits exceptions to seniority layoffs to protect students' fundamental constitutional rights. LAUSD had not exercised that exception. (United Teachers Los Angeles has appealed; arguments will be heard June 28.)

Earlier this year, the Sacramento-based nonprofit EdVoice brought suit against Los Angeles Unified over the pro forma way it conducts teacher evaluations. But here, the suit isn't seeking to overturn the Stull Act, which defines how evaluations are done; it says that the district (along with nearly every other one) has chosen to ignore the law's requirement that student performance be included in teacher evaluations. 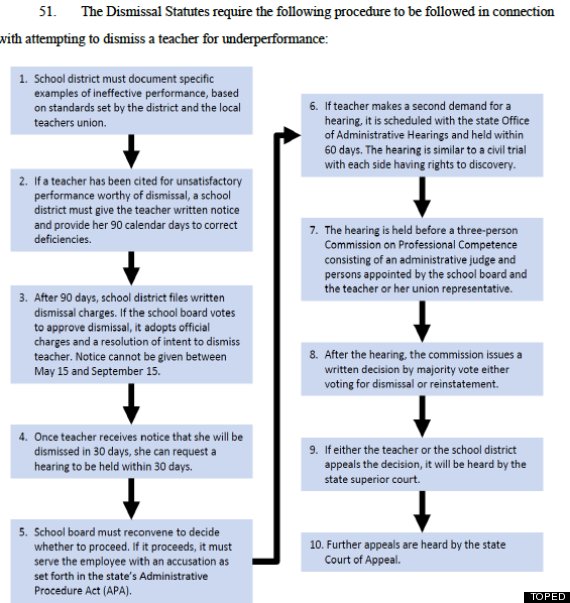 There's no shortage of critics of the tenure, dismissal, and layoff laws, which teachers unions have lobbied hard to preserve. California is one of few states that have not lengthened the probationary period for teachers. More than two dozen states have strengthened their evaluation systems in the past several years. California's dismissal law, with its 10-step process laden with due process, can cost districts hundreds of thousands of dollars to fire a teacher on the grounds of unsatisfactory performance, which is why districts often work around it by paying teachers to retire or pushing them from one school to another.

Persuading a judge that the practical problems and the effects of the laws rise to the level of a constitutional violation is another matter. (In an analogous case, California is among the nation's bottom spenders on K-12 education; it has tough standards and a challenging student population. But attorneys last year failed to convince a Superior Court judge in Robles-Wong v. California and Campaign for Quality Education v. California that adequate education funding is a constitutional right.)

The tenure law may be particularly challenging. As the suit points out, something like 98 percent of probationary teachers have gotten tenure. The two-year probationary period (actually 18 months, since teachers must be notified by March of their second year) is not long enough. Too often evaluations have been slapdash. But the law itself doesn't require a district even to cite a cause in denying tenure; the power of dismissal lies with the employer.

Students named in the lawsuit are from Los Angles Unified, Pasadena Unified, Sequoia Union High School District, and Alum Rock Union Elementary District, although only Los Angeles Unified and Alum Rock, which serves 11,000 students in San Jose, are specifically cited as defendants, along with Gov. Brown, Superintendent of Public Instruction Tom Torlakson, the State Board of Education, the state, and the State Department of Education.

The only specific reference to Alum Rock was in the identification of plaintiff Daniella Martinez, 10, whom the lawsuit says chose to transfer to a public charter school because "of the substantial risk that she would be assigned to a grossly ineffective teacher who impedes her equal access to the opportunity to receive a meaningful education." The initial filing doesn't cite evidence of specific teachers who negatively affected Daniella or the other seven defendants. It refers to studies by such groups as the National Council On Teacher Quality, which issued a blunt assessment of the tenure and dismissal practices of Los Angeles Unified, and on research by Hoover Institution author Eric Hanushek, who concludes that just by dismissing 6 to 10 percent of weakest teachers, students' academic achievement and long-term earnings as adults would increase significantly.

Los Angeles, as the state's largest district, may have been named as a defendant because its superintendent, John Deasy, has been outspoken about the need to change labor laws. United Teachers Los Angeles has also sued over a comprehensive teacher evaluation system that Deasy has put in place.

Deasy would appear to be a friendly witness for the plaintiffs. In a statement, he said he supports lengthening the probationary period, quickening the dismissal process, and reforming the state's layoff law. "To my dismay, we have lost thousands of our best and hardest-working classroom instructors through the last hired, first fired rule. When forced to reduce our teaching staff through budget cuts, we are compelled through state law and union rules to base these difficult decisions primarily on seniority," Deasy said.

But when questioned, Deasy will be pressed to acknowledge that it may not be the laws but the implementation that counts. Since joining the district, first as deputy superintendent, then superintendent, Deasy has pushed administrators to apply more scrutiny in granting tenure and more perseverance in dismissing bad teachers. Last year the district terminated 853 teachers. Furthermore, the number of probationary teachers denied tenure rose significantly last year: from 89 in 2009-10 (10 percent of those eligible) to 120 teachers in their first year and 30 in their second year. Other superintendents would agree that well-trained, persistent principals can document the case for teacher dismissals, notwithstanding cumbersome, excessively burdensome requirements.

John Fensterwald is the editor and co-writer of TOPed.org. Follow him on Twitter (@jfenster). Read more of his work and more at www.toped.org.