Astronomers have discovered rings around an asteroid-like body whose orbit is between those of Saturn and Uranus. At just 250 kilometres across, Chariklo is the smallest body so far found to have rings. Previously, only the giant planets — Jupiter, Saturn, Uranus and Neptune — have been seen sporting them.

Published online today in Nature, the finding indicates that rings may be a more common feature than previously thought. The discovery was an accident and a surprise, says lead author Felipe Braga-Ribas, an astronomer at the National Observatory in Rio de Janeiro. Rings are interesting celestial features, as they are often a first step in the formation of planets and moons. But matter would typically struggle to stay stable around a body with only a tiny gravitational pull. “We thought that maybe having rings was linked with the mass of the object. So finding them on a small object was very unexpected,” he says. 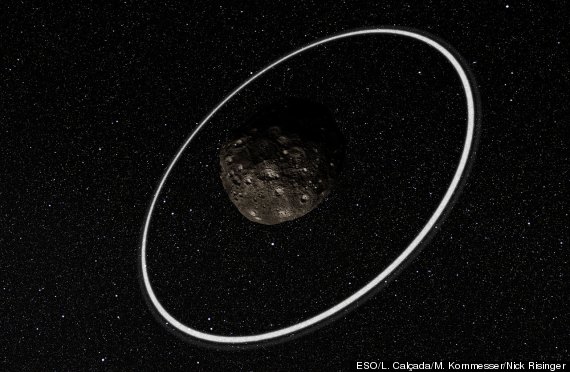 Chariklo belongs to a class of objects called Centaurs, which traverse the outer Solar System in unstable orbits and can share characteristics with both asteroids and comets. Because they are small, dark and far away, studying them is a challenge, Braga-Ribas says. His team discovered the rings while observing the way in that the asteroid blocked out light from a distant star as it passed between the star and Earth on 3 June 2013.

The researchers found a dip in brightness, as expected, when the asteroid traversed the star. But they also detected two much smaller dips, both before Chariklo passed in front of the star, and after. Piecing together results from telescopes at seven sites across South America, the team deduced that the blips were caused by two distinct, narrow rings that were respectively 7 and 3 kilometres wide. The same technique was used to discover the rings around Uranus in 1977.

Finding rings around Chariklo solves a puzzle about the object, says Braga-Ribas. Analysis of the light coming from the asteroid had previously shown its composition changing over time. A ring system made of ice, which is sometimes seen head-on but at other times shrinks to just a thin line when viewed side-on, would neatly explain the changes, he says.

Francesca DeMeo, a planetary scientist at the Harvard-Smithsonian Center for Astrophysics in Cambridge, Massachusetts, says the results are very convincing. “It would be really hard to explain the measurements in any other way,” she says. But how the rings formed remains a puzzle. The authors suggest that another small body could have hit Chariklo, sending debris from both bodies into a disk. Other possibilities are that a disk formed from material that was spun off from Chariklo as it rotated, or that the body released dust or ice as it travelled, much like a comet. All are plausible, says DeMeo.

A big question is how the rings can be stable, given the asteroid’s tiny mass. If an impact caused them, it would have to have occurred at very low speed for the particles to remain in the Centaur's orbit. But however they formed, kilometre-sized moons are likely to be ‘shepherding’, or constraining, the rings, and preventing the debris from dissipating, says Braga-Ribas.

James Bauer, an astronomer at NASA's Jet Propulsion Laboratory in Pasadena, California, says that studies of the rings’ composition will hint at their origins. Chariklo is one of hundreds, if not thousands, of small bodies in the outer Solar System that have so far been little studied. Although Chariklo could be alone in having rings, Bauer adds that this is unlikely.

“I think there is a good chance we’ll see another ring system around a small body, somewhere in the outer Solar System,” he says. “If you start birdwatching and see a bird for the first time, the chances are it’s going to be a common bird.”