Love and marriage is the traditional pairing, but now there's a step in between for many couples: a mortgage. While marriage may come eventually for unmarried couples who buy a home together, for many millennials (those aged 18-34), down payments have taken precedence over heading down the aisle. In a recent Redfin survey, 38 percent of American millennials said that they would, or have, put off a wedding or honeymoon in order to afford to buy a home. That statistic shouldn't be too surprising considering that the average cost of a wedding in the U.S. hit an all-time high of $29,858 last year, according to TheKnot.com. That's excluding any costs for the honeymoon!

Clayton Jirak, a Redfin real estate agent in Chicago, says that many of his millennial-age clients are delaying marriage to lessen the financial burden of paying for a wedding and a home within the same year. "This is becoming a popular option for couples who are prioritizing homeownership over marriage," he says. Lindsay Milkovich, a Redfin real estate agent in Los Angeles, agrees. She helped two unmarried millennial couples close on their first homes in December. "To them, it just seemed more practical to put their money toward the purchase of a home instead of a big party," she says.

These unmarried couples are making a decision that makes sense financially, but they may also be making a much bigger commitment by choosing a mortgage over marriage. A divorce can be simple, but decoupling from a co-ownership situation isn't.

"Breaking up is hard to do, but splitting financial assets makes it even harder especially considering the fees and closing costs that are associated with buying and selling a home, which if done too soon can wipe out all the equity accumulated," said Redfin chief economist Nela Richardson. "A house for most people is a long-term asset, which it should be if you are looking for a return on your investment." 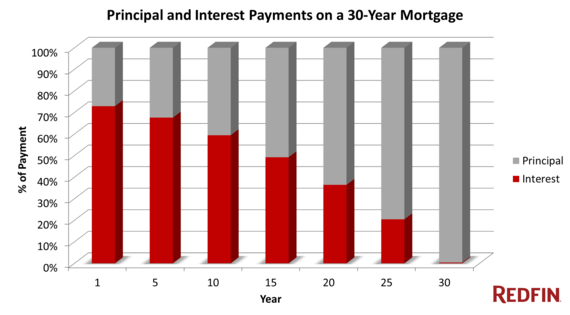 In the first few years of paying a mortgage, the bulk of the monthly payments goes toward interest, not principal; this means you aren't really paying down the debt you owe to the bank just yet. It's payments to the principal along with home price appreciation that build equity for homeowners. For example, for a $300,0000 mortgage, only a third of the payment goes toward the principal in the first two to three years, and the rest is interest. With each subsequent year, more of the monthly payment goes directly to the principal. That means most people will need to stay in their home for at least five to seven years before it makes financial sense to sell.

So, if you are looking to see a return on your investment, you should be sure that your relationship is ready to weather that kind of commitment. According to the Centers for Disease Control and Prevention, 27.4 percent of couples who cohabitate before marriage break up by the third year of living together. That might be something to think about if you already have an issue with your significant others' cleaning habits ... or lack thereof.

This survey was conducted online within the United States by Harris Poll on behalf of Redfin from December 8-10, 2014 among 2,021 adults ages 18 and older. This online survey is not based on a probability sample and therefore no estimate of theoretical sampling error can be calculated. For complete survey methodology, including weighting variables, please contact press@redfin.com.