At the supermarket, I breezed past the sports drink aisle. There was no guessing about which color drink I needed to bring home for any teenage boys. I sashayed down the cereal aisle without worrying if any earth mothers were giving me the Evil Eye as I reached for the Froot Loops; I was only buying some nutritionally correct whole grain cereal for my husband. The frozen food aisle was also a cinch, with no concerns about what type of mini-pizzas to buy or whether they had run out of turkey dinners, the ones with mashed potatoes, not stuffing.

Once home, I put away the groceries. No one walked in, opened the refrigerator, and stood there cooling the universe while complaining that, even though I had just spent $200, there was "nothing to eat" and why did I buy "that color" Gatorade. As I left the kitchen without having to defend my purchases, I noticed the pencil marks going up the wall, recording when each of our two sons exceeded my height, and then their father's.

As I drove past our neighborhood elementary school, I flashed back to when I used to drive by with our younger son strapped into his car seat. Each time, he asked me when it would be his turn to go to the "big kids' school." Recently, my husband and I delivered him to the real "big kids' school," the University of Miami.

Unlike many of his classmates, our son did not seem to suffer much angst about where to apply to college. He applied for an early decision to the University of Miami, as it met all his criteria for an institution of higher learning. It doesn't snow there, he didn't have to take the SAT II, and he could submit an essay he had already written in English class for the application. 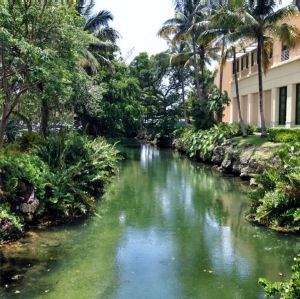 I could not help but compare the lushly landscaped campus, including fountains, with the small, isolated, often frozen New England college his father and I attended. I am certain he can expect more February parental visits than his older brother received at Penn State. The university treated us to a "free" lunch in our son's cafeteria. However, the tuition bill was an excellent reminder that there really is no such thing as a "free lunch." There was a plethora of food choices and none of the fried mystery shapes I remember as college cafeteria fare.

As a graduate of a large high school in a Philadelphia suburb, our son had admitted to some apprehension about meeting his roommate, the valedictorian of a 12-person graduating class at a private day school on one of the Florida Keys. Based on our son's pronouncement that his roommate is "chilled," I think they'll do fine. When we left, they were collaboratively figuring out the best way to configure the power sources for their myriad electronic devices. Moving into my first dorm room was so much easier. I didn't need a plug for my manual typewriter.

My maternal antennae did notice that University of Miami sports teams are the Miami Hurricanes, and there are hurricane shutters on our son's dorm room window. I was somewhat comforted when university president Donna Shalala assured us she had consulted the president of Tulane University in Louisiana, and her university's emergency plan has no contingency for counting on the Federal Emergency Management Agency or the Department of Homeland Security.

President Shalala also tried to allay any parental separation jitters by informing us that we were leaving our most "prized possessions" in good hands. I can't say I ever thought of my son as a possession -- "possessed," at times, during his Terrible Twos, but definitely not a possession.

As my husband, the dog and I adjust to our empty nest, we wish our son Godspeed as he enters this new phase of his life.

[Photo credit: Jeremy Albelda]
A version of this essay previously appeared on Boomeresque.