The Book of Odds, an online reference site, indicates that men are more likely than women to report witnessing UFOs.

And for decades, presenters at UFO conferences have been predominantly male -- until now. The first annual Women's UFO Symposium is gearing up to offer a new perspective and restore balance to the growing world of gatherings where people present their ideas and experiences in UFOlogy.

"Women are not on the forefront of many UFO conferences. It's kind of an old boys club," said symposium organizer Paola Harris.

"There are so many wonderful researchers out there that have literally dedicated their lives to a cause, and they deserve to balance the energy," she told The Huffington Post.

The conference will take place May 19-20, 2012 (men are welcome to attend), in Glen Rose, Texas, near the site of a well-publicized group of UFO sightings in the town of Stephenville in 2008, when hundreds of people reported different types of UFOs, triangular and disc-shaped. Some of the eyewitness accounts described unidentified craft larger than a football field.

The topics presented by the speakers at the Texas women's UFO event will include multiple-witness encounters, alien abduction, the media and UFOs and anti-satellite weapons.

"The ladies are great, but for me, there are two historical significances," said Harris, author of "Connecting the Dots: Making Sense of the UFO Phenomenon." "Number one, that it's being held near Stephenville, the site of the 2008 UFO event, and where Stephenville newspaper reporter Angelia Joiner lost her job over reporting this case, and we're giving her a special award."

The second historical event is the 65th anniversary of the 1947 UFO sighting that started the modern era of reports. Private pilot Kenneth Arnold claimed to see a group of unexplained flying objects near Mount Rainier in Washington state. When he described them to the press as appearing like saucers skipping across water, the term "flying saucer" was born. 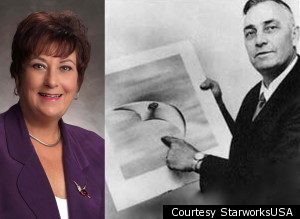 The keynote speaker at the women's conference will be Arnold's daughter, Kim (pictured at left with Kenneth Arnold), speaking for the first time about her father's experiences, not just with his initial historic 1947 UFO encounter but with subsequent ones.

"I convinced Kim, for historical purposes, to talk about the fact that her father had more than one sighting," Harris said. "There's material around Kenneth Arnold that isn't very well known, and as an investigative journalist, I want that out there."

The mistress of ceremonies for the conference is Tracie Austin Peters, a trained concert pianist and executive producer and host of her own cable TV talk show, "Let's Talk ... Paranormal."

"The vision for me of this event is a collection of really great, dedicated, serious women within the study and research of UFOlogy. Each woman involved with this carries their own weight with this particular genre," Peters told HuffPost.

Peters, who has had her own share of personal UFO sightings and is the author of "Welcome to Haunted Las Vegas, Nevada," says that while she'd be equally comfortable with a conference of all men, she's especially happy this is going to be a symposium exclusively of women.

"When you've got a panel like this, the female energy is one that is very unique and brings a very sensitive approach to it," she explained. "I can't speak from a guy's point of view. There may be some men that totally connect with it and some that won't.

"At the end of the day, it's the information, and these women are very respected in the field of UFOlogy. These are credible women who are used to the platform of UFO conferences and seminars, so I think it's going to be something very unique."

And Harris hopes that symposium attendees will come away from the event with something special.

"A sense that this is real, that we are part of something greater -- a greater universe and mystery. And a sense that people can really join together, not on a commercial level, but on a fraternal, or sister, level to diffuse a message.

"And the message is to study it and try to connect the dots on your own."