Perhaps the highest compliment that can be paid to a fresh interpretation of Shakespeare is that it makes you want to go back and re-read the play. This is pretty rare -- ordinarily an audience's reaction to the Bard in swimsuits is that it knows perfectly well what the play is about, and that what was on the stage wasn't it -- but it does happen in First Folio's lyrical production of Cymbeline. 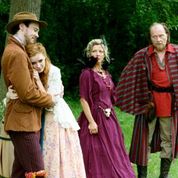 Cymbeline is one of those Shakespeares you're sure you must have seen once but can't remember worth a damn. And as I summarize the plot you'll understand why your memories are so vague: the play is a thing of shreds and patches, a mishmash of Othello, Romeo & Juliet, The Winter's Tale, Twelfth Night and several others. King Cymbeline's evil wife wants his virtuous daughter Imogen to marry her idiot son, but Imogen has secretly married Posthumus, who then encounters Iachimo, who bets he can seduce the bride and then manages to persuade Posthumus he's done so. When the desolate bridegroom tries to arrange to have Imogen killed, she takes poison and appears dead but then awakens in the home of her long-lost... and so on.

In adapter David Rice's witty conceit, this ragout becomes rabbit stew, with Cymbeline as head of a gang of West Virginia ruffians who refuse allegiance to either side during the American Civil War. It's hard to imagine a more powerful expression of isolation threatened by outside forces than the Appalachia of 1863.

The setting also gives director Michael Goldberg numerous opportunities to make light of even the weightiest of characters. Cymbeline's blood enemy is here portrayed as a mountain man in the Ewell Gibbons mode, complete with rabbit carcasses around the neck. The son who aspires so hopelessly to Imogen's hand owes much to Jethro from "The Beverly Hillbillies" -- or is it the other way around?

Most important, though, the setting gives composer-lyricists Rice and Michael Keefe the opportunity to create a roots-music score which helps tell the story and comment on it at the same time. Maybe it's just a happy accident that American hill-country music grew straight out of Elizabethan melodies, just as backwoods English is a direct offshoot of Shakespeare's own. Or maybe these facts were the inspiration for the entire show. In either case, few instruments convey either merriment or mourning more successfully than country fiddle.

Bliss it is to see this difficult play so well done; but to see it under the stars among the trees on the Mayslake Estate is very heaven. The theater provides citronella candles but bring bug-spray anyway; and during this climate-change summer neither a sweater nor a raincoat will come amiss. I promise you, though -- if you brave "wind and rainy weather" to see Cymbeline, you won't forget it again.

Less successful, unfortunately, are productions from two companies whose work is generally top-notch. The Strange Tree Group, which has created a series of fanciful, sharply intelligent and beautifully designed meditations on Shakespeare (King Phycus), religion (The Spirit Play) and death (Goodbye, Cruel World), takes on time travel in The Half-Brothers Mendelssohn by Elizabeth Bagby. But this second Strange Tree event to begin with a funeral doesn't seem to have a trajectory: it's sort of about the universal desire to change the past, sort of about tensions between parents and children, sort of about fraternal rivalries, and a lot about the sci-fi commonplace that changing the past would be destructive even if it were possible. While the second act is stronger than the first, as if the playwright had finally figured out her topic, it's not enough to make the play worth -- well, the time.

Likewise, Lookingglass takes a familiar theatrical concept -- the homage to/parody of film noir -- and does nothing to make it new. Big Lake Big City, a new play by Keith Huff (A Steady Rain), is the ostensibly comic tale of a hard-ass detective (the always fine Philip R. Smith) investigating murders loosely tied to a caricature pimp (Anthony Fleming III, badly underused) while fighting his attraction to a tough doctor (Beth Lacke) who may be a suspect. If these elements are designed to operate as a smooth machine, the sand in the gears is the play's relentless focus on the repeated appearances by a still-living victim with a screwdriver in his head (Eddie Martinez, doing the best he can to move beyond being a punchline). None of director David Schwimmer's bells and whistles -- a talking sculpture, a levitating Ferris-Wheel compartment -- is enough to turn this into a play.

Keith Huff is a superb dramatist. In The Detective's Wife as well as A Steady Rain he revealed a remarkable ability to locate complex characters within morally ambiguous situations and portray their decisions with sympathy but without illusions. Nothing in his work to date, though, suggests he's any good at writing comedy, however hard-boiled. His work on the Netflix series "House of Cards" shows a tendency to fall back on cheap cynicism to get equally cheap laughs. While Huff has perfect pitch for the way real policemen talk and think, he's absolutely tone-deaf when he attempts to satirize them or their quarry. And this play reinforces the tv series in demonstrating Huff's developing an unpleasant specialty in ice-cold women.

I look forward to seeing this excellent playwright return to his metier.