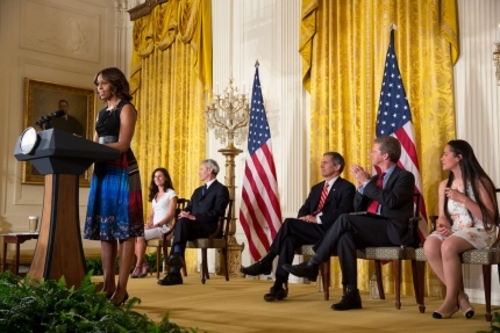 This month, as we remember D-Day and reflect on the many sacrifices made by our soldiers, it is great to see a national leader come out in support of the veterans -- and the first lady did just that last week at the White House.

By 12:15 on Wednesday, members of the veteran community and advocates were filing through the White House gate for what promised to be a very inspiring moment: the day Michelle Obama challenged the US mayors to end veteran homelessness.

The First Lady's speech confirmed the administration's commitment to end veteran homelessness as she recapped the work on the housing first model and the push to develop the Supported Services for Veterans Families Program, which has been a breakthrough in veteran and homeless services alike.

This program is a perfect example of how partnering with community-based nonprofits has made it possible for the VA to empower tens of thousands of veterans to rebuild their lives.

Mayors from all over the country were in attendance. Among them were the leaders of some of the hot spots for homeless services in the country: Houston, Salt Lake City, Jacksonville, St Paul and New Orleans.

These five leaders shared their best practices in their cities' response to homelessness.
By the way, we heard all afternoon about the mayoral competitive spirit so, for the mayors out there, the five cities listed above are not in any special order!

Some of the accomplishments and approaches I found noteworthy:

Houston is being lauded for the "Yes" culture, created by Mayor Parker, which is producing amazing results and should be an inspiration to city leaders everywhere. It's great to see how a positive, solutions-driven outlook can really make things happen when it comes right from the city leader.

Mayor Brown of Jacksonville described his work with the business community to create employment opportunities and his relentless outreach efforts to find each person experiencing homelessness in the largest jurisdiction among US cities in the country. This is the kind of approach you need to bring everybody in from the street in a city. And, New Orleans Mayor, Mitch Landrieu, chimed in on this. He has been known to take to the streets himself to bring people in before inclement weather.

Tallahassee's Mayor, John Marks, put his hand up and announced that he would offer free transportation to veterans in his city's mass transit system. And, you've just read it in this blog, so stay tuned Tallahassee...

It's clear that ending veteran homelessness is possible with ideas and outlooks like this and the hope is that mayors all over the country will take heed and join in some good old fashioned mayoral competition lest they would be outrun by their neighbors.

Some of this energized, hit-the-ground-running approach can be credited to Laura Zeilinger, the new Executive Director of the US Interagency Council on Homelessness. She took the helm in February and is already showing promises to shake up the system nationwide in the council's work to end veteran and chronic homelessness.

She has many allies in this mission including Vince Kane and his team who have been providing steadfast leadership in crafting innovative solutions for veterans in VA's Philadelphia office.

The first lady and Jill Biden are pledging the support of Joining Forces, their national-level initiative designed to reach out to veterans and their families. This offer should be enticing enough for any mayor in the country to consider.