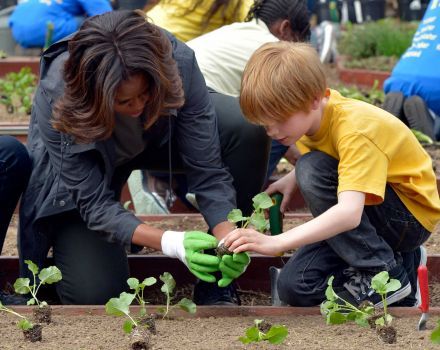 First lady of the United States Michelle Obama is well-known as a style icon, a mother, a wife, a lawyer, and an activist, but her leadership skills have not received the attention that they should have.

On the first day of spring 2009, just a few short months after her husband's inauguration, first lady Michelle Obama started a garden on the White House Lawn. "I wanted this garden to be more than just a plot of land growing vegetables on the White House lawn," she wrote in her book American Grown: The Story of the White House Kitchen Garden and Gardens Across America. "I wanted it to be the starting point for something bigger."

And a year later it was much bigger. Her garden became part of her crusade against childhood obesity, she launched her Let's Move! campaign, for which she's talked President Barack Obama and Vice President Joe Biden into participating in an online video and "mom danced" with Jimmy Fallon. She lassoed comedian Will Ferrell into doing focus groups with children and teamed up with the Miami Heat, getting big boys LeBron James, Chris Bosh, and Dwayne Wade to eat an apple a day for a PSA recorded in the White House's Diplomatic Room.

She didn't just get attention, she got results. She can count such major accomplishments as Disney's recently-announced commitment to meet nutritional guidelines through its channels and theme parks; the Department of Defense's dramatic improvements to its nutritional standards for our troops; and the passage of the Healthy, Hunger-Free Kids Act, groundbreaking legislation that is helping America's public schools offer healthier school meals for tens of millions of children. Thanks in no small part to her leadership, the big box retailer Walmart is announcing a commitment to build or expand 1,500 stores in communities with limited or no access to healthy food.

Five years later, just as a late spring thaw was finally settling in, I had the chance to catch up with the first lady, to ask her some important questions about leadership, collaboration and the balancing act of family, work and life. Her answers and insights reinforce her determination to get the job done.

And today at 3:30 p.m. ET, first lady Michelle Obama will be joined by local elementary school children, and FoodCorps leaders to continue her crusade by planting the sixth annual vegetable garden on the South Lawn. 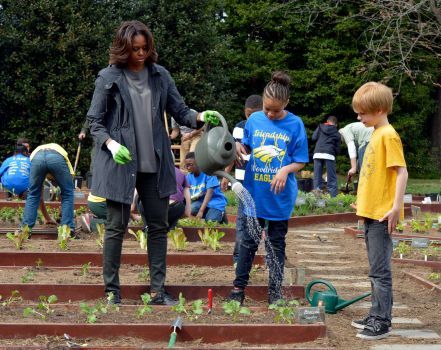 My Q&A with the first lady:

Your Let's Move! campaign was developed to fight childhood obesity, an important mission; what type of leadership skills are needed to get others to rally around and support your vision?

Back when we launched Let's Move! in 2010, I made it very clear that government alone cannot solve the problem of childhood obesity -- we need everyone at the table. Whether you're an educator, a medical professional, a faith leader, a coach, an elected official, a parent, or a child yourself, you have a role to play in helping us solve this problem. Everyone can be a leader on this issue in their family or community. That might mean doing something as simple as rethinking the food you feed your kids -- serving water or skim milk instead soda, or fruits and veggies instead of candy and chips. It might mean organizing your school to sponsor a running club for kids before school starts in the morning. It might mean rallying your community to refurbish a playground or install a bike path. The possibilities are endless, and even the smallest changes can add up over time and make a big difference.

You set an ambitious goal: to solve the obesity problem in America within a generation. For goals in work and in life how do you assess progress and how will you measure success?

Four years ago, we launched Let's Move! with the ambitious goal of solving the obesity epidemic within a generation -- and for me, success means meeting that goal.

As for progress, we've taken some major steps forward over the past four years, and right now, we're truly at a pivotal moment -- a tipping point when the message is breaking through; people are making changes in their families, schools and communities; and healthier habits are beginning to become the new norm.

According to a recent CDC report, obesity rates have fallen by 43 percent among children ages 2 to 5 years old. But while this is an important measure of progress, it's also a small one -- we still have a long way to go in solving this problem, particularly among older children. So now isn't the time to take our foot off the gas and congratulate ourselves on a job well done. Now is the time to dig even deeper and fight even harder, because now we know that it's possible to make a difference and that our strategies can work.

The campaigned heated up recently with you and the Miami Heat in a courtside style interview in the White House. How important are collaborations to advance goals in work and life?

The Miami Heat joined us at the White House to celebrate their championship, and that seemed like the perfect opportunity to have them help spread the word to the younger audience they reach about the importance of eating healthy and getting active. We've worked with the NBA, the WNBA and athletes from all different sports to spread the message that what you eat really impacts your performance both on and off the field. Collaborations like these with individuals, businesses and organizations in every sector are critical for the success of Let's Move!

When do you know it's time to walk away from a project or initiative?

When it comes to childhood obesity, our goal is nothing less than solving this problem within a generation so that kids born today will grow up healthy. We decided on a generational goal (as opposed to a five-year goal, or a 10-year goal) because it took decades for this crisis to develop, and it's going to take decades to fix it. And I'm in this for the long haul!

What advice would you give to working mothers trying to balance career, family and health?

I didn't always live in the White House. It wasn't that long ago that I was a busy working mother myself, struggling to balance meetings and conference calls with soccer practice and carpools. My husband and I both had demanding jobs, and over time, when it came to how our family ate, we started cutting corners -- popping things into the microwave or spending way too much of our monthly budget on takeout. The result was less than optimal health outcomes for our kids.

But healthy habits don't have to be time-consuming. For example, just cooking a few more meals a week at home can have a real impact on your family's health (and on your family budget -- you can save a lot of money by substituting home cooked meals for fast food or takeout). That's why, through Let's Move!, we're going to be working to help offer families the skills and support they need to start cooking at home again. That's really the whole idea behind Let's Move! -- to make it easier for families to lead healthy lives.