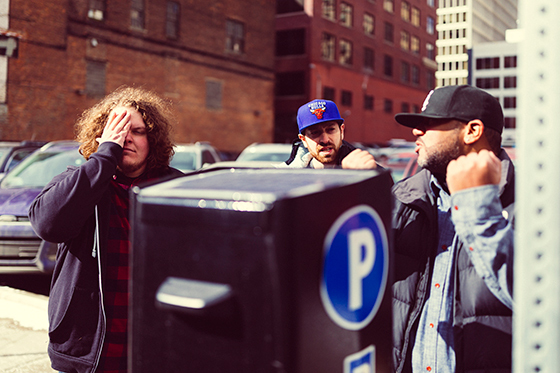 The three-piece hip-hop group Ugly Heroes of producer Apollo Brown with emcees Red Pill and Verbal Kent bring a hyper soulful sound charged with pure substance about the society we are living in. They are the other side of all the rap music that dominates the airwaves. With their insightful rhymes over hard-hitting emotive beats, Ugly Heroes not only tap into the listener's minds, but also their hearts.

Along with the countless solo and collaborative projects all the members have done thus far, Ugly Heroes are back after their debut self-titled EP and LP with a new album Everything In Between, due out June 24th on Mello Music Group. In the mean time, we have a first listen to a track from the album "This World" along with an interview with the trio.

What's the track "This World" about?

Apollo Brown: I'm going to let the other guys, the emcees, talk about this one. I just wanted to provide a backdrop that garnered respect and attention. I wanted something that was simple, yet undeniable when heard. Verbal and Pill gave the track life and sort of a conscience. Came out amazing.

Red Pill: I think we all know the current state of the world seems to be pretty intense. Our country specifically with our circus of an election, race relations, police brutality issues and socioeconomic problems make it feel like we're at a boiling point. So we're asking the obvious rhetorical question, "What is this world coming to?" Verbal came up with the idea to just kind of go after the worst of the worst types of people in this country and the world, while trying to show off a little rap wise.

Verbal Kent: We basically hate the "stars", the main players we keep hearing about and are dealing with in American pop culture and wanted to express that. You know, you hear allot of "battle" rap, which can be a waste of energy when aimed at other rappers, or the word famous imaginary rapper that rappers talk about when unleashing patterns and punch lines that just don't really strike at anyone. We name drop and express our displeasure directly with people like Donald Drumpf in this joint, and we don't really hold back. We really don't feel like we have time to hold back anymore. "What is this world coming to?" is a really good question and we ask the listener that here.

What can we expect from the new album Everything In Between?

Apollo Brown: Just that, everything in between. Us, as Ugly Heroes pride ourselves on being the regular guy. The blue-collar individuals that make the world go 'round. You're going to get what you've always gotten from us with this album. Soul, feeling, and true life, with a political undertone. Music that will make the listener either forget something, or remember something. We stayed with the same relatable formula that made the first album so successful.

Red Pill: I think this time around there's a heavier layer of optimism. It's about all of us growing up in different ways over the last three years and trying to figure out our respective roles in the world. Since the first record we've toured overseas twice, I've been over in Europe on my own, toured the US opening for Murs, Verbal has been creating a small coffee shop empire in Chicago and Apollo had a daughter and recently got married. A lot has changed. So this album I believe is more reflective, it's a lot of the same ideas, but we're also focusing on family, on what's important to us more than what's hurting us. We're trying to figure ourselves out.

Verbal Kent: I mean, this album for me is the accumulation of all my joy and pain, handed back to a listener. Truthfully it's full of many things about myself I've always wanted to say to people that I haven't been able to say to them. Working with Chris and Apollo, they bring out the best in me. It's like I'm telling the story of my life with them. I think we brought that energy to these records. Red Pill is phenomenal at being emotional and logical at once, almost talking to himself and the listener at the same time. I'm full of hope and regret, at almost simultaneous moments and in a similar way we each are dimensional and extremely honest. Apollo paints full pictures with his production, he tells stories with sound. His beats are inspiring and haunting. It's like 3 movies, edited to tell one big story. I think if people are into that idea of music and how powerful it can be when uncut, this is an album that will match up with their own stories and maybe help to attach memories to.

With this being the third Ugly Heroes release after the self-titled LP and EP, how has the collaborative nature of this project been significant to each one of you?

Apollo Brown: I thoroughly enjoy making music with my friends. Watching what comes of ideas from start to finish. It's amazing what these guys put to paper, then to wax. When we make music, whether UH albums, or just songs for each other's respective projects, it's always organic. Everything just comes natural because we're all on the same wavelength. We all have the same goal in mind to make music that affects those listening to it.

Red Pill: For me personally, it's the beginning of my Mello Music career. Apollo gave me a massive opportunity and I've been able to be successful with the group and on my own, so it means the world to me. Getting to come back three years later and revisit the way that we work together was fun and also challenging. We had a very short window of time to knock this out, we got our first batch of beats from Apollo in early January and turned the record in at the end of February, so that was an interesting process in itself. But the record came out great and it was exciting watching it go from nothing to something in a matter of less than two months. We work well together and I think it'll show in the music. I consider those guys great friends.

Verbal Kent: It's huge, working with friends. Like minded friends. We've formed a bond through this, through album making and through traveling together. I think we all recognize a void in genuine rap music and in our own ways, have come up with formulas and math that is our own to contribute to the emptiness. We have huge respect for each other and at this point we are family. It's only really our second full-length project, I can imagine the bond will grow and as we each grow as individuals, our collective efforts will only become stronger at the same time.

Ugly Heroes new album "Everything In Between" is due out June 24th via Mello Music Group. Pre-orders are now available via iTunes and Bandcamp. For more information, visit mellomusicgroup.com.