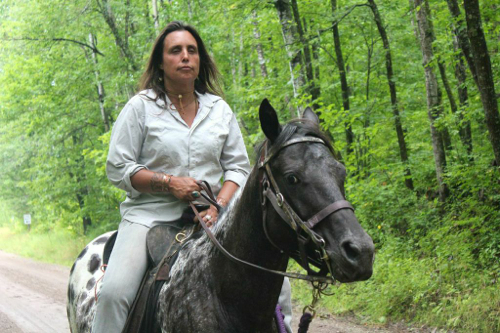 Native American activist, orator and writer Winona LaDuke had the Brainerd Lakes area residents in the palm of her hand. In a page that could have been taken from one of Garrison Keillor's yarns, this time with a First Nation twist; LaDuke was conducting an information meeting in Brainerd, Minnesota as part of the Love Water Not Oil tour. Her audience was mostly blond and blue eyed, and blue eyes widened at the news that the Enbridge Corporation was planning a pipeline that would traverse treasured lakes and waterways in northern Minnesota. "The Indians are upset about the pipeline, my job is to get the Norwegians angry," she joked.

The audience loved it, and the setting was classic Lake Wobegon, with a bountiful pot-luck supper stretching endlessly across one wall of the room. The difference was the group of First Nation leaders and riders, including musicians Pura Fe and Frank Waln huddled in isolation in a far corner of the room. But that image would change dramatically as the evening unfolded. 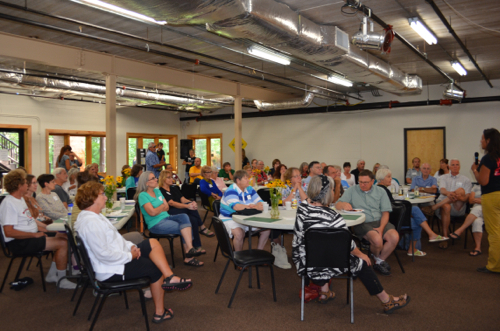 As images from the film "Honor the Earth: The Triple Crown of Pipeline Rides" flickered across the small screen in the Brainerd Arboretum meeting hall, eyes glanced admiringly to the table in the corner of the room.

LaDuke and the riders had completed a day of intense horseback riding from the northern Aitkin County town of Palisade. Palisade is located along the banks of the Mississippi River, where Enbridge plans to place part of the proposed Sandpiper Pipeline. Riders followed the old Soo Line railroad bed. The Horse Ride for Mother Earth was planned to traverse the pipeline route through Minnesota, drawing attention to the diverse ecosystem that no one sees from highways. 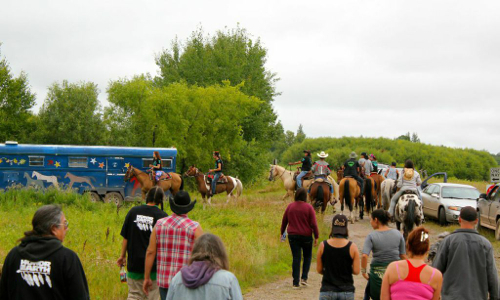 So this is what I've got to say to Enbridge: "This is Minnesota, Enbridge, and we value our water more than we value your oil!" LaDuke said.

Applause all around at THAT statement as questions began to fly about what could be done to mitigate a pipeline that would have the potential to rival the oil flow of the Keystone XL. One man in the audience offered unsolicited testimony that he is a former oil worker and reminded all of the consequences of the Gulf of Mexico's Deepwater Horizon disaster. Following the playbook of the Exxon Valdez in Alaska, fishing in the Gulf is in danger of collapse as the five-year anniversary of the disaster approaches.

"Let's have a show of hands if you knew about the Sandpiper pipeline," LaDuke asked.

Worried looks appeared all around as only a few hands were raised, and those belonged to event organizers.

LaDuke went on to explain that in Minnesota no one is sure of the routing, since Enbridge will not release the exact mapping coordinates; citing "protected infrastructure" status. The Public Utilities Commission (PUC) has discussed routing, but has only looked at routes proposed by Enbridge, not the routes proposed by citizens groups. LaDuke described a public hearing where only Enbridge maps were allowed. "This is a First Amendment issue," she said.

All of the northern Minnesota Ojibwe tribes have opposed the pipeline, which has tribal councils concerned that fisheries and wild rice beds will be directly threatened. Parts of the pipeline also cross treaty lands.

Citing stats from public comments submitted to the PUC, which can also be found here, LaDuke noted that the submission requirements were hard to understand and cumbersome, IF residents were aware of the process.

Some 459 opposed the pipeline route, while 37 were proponents of the route. Of those opponents, 387 expressed environmental concerns, 131 expressed concerns about the tribal impact and 347 wanted an alternative route, outside of the lakes.

She went on to challenge Enbridge's stand that most people are in favor of the pipeline.

Two additional routes selected by the PUC for consideration travel north of Clearbrook, MN with plans for an additional pumping station there, and south around Grand Rapids. Both cut across the Headwaters of the Mississippi, and would cross all 3 major watersheds of North America, LaDuke explained.

Somewhat joking, LaDuke suggested that the pipeline should follow the existing I 94 Highway corridor, where "everyone could see it," and monitor it for leaks.

She cited the oil spills in Kalamazoo, Michigan and in Mayflower, Arkansas, which are still not completely cleaned up.

Readers can follow her blog as she rides, and any and all people with horses are invited to join.

Remember the isolated group of Indians in the corner? By the end of the presentation, Waln had the audience gathered around a broken down piano as he pounded out a hip-hop tribute to his mother. The crowd gathered close and embraced the young man as he sang about the pain of family violence and the steadfast support of his single parent mother.

A Norwegian-Indian Alliance was formed then and there. Solid as stone. 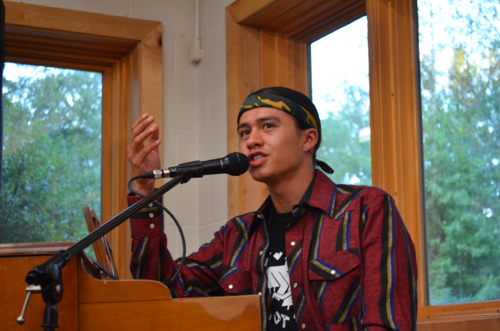 Frank Waln warming up the crowd

Honor the Earth began the Ride for Mother Earth on August 17. The tour schedule includes a series of Love Water Not Oil concerts in Pine River, Walker, and Park Rapids; finally winding up in Bemidji on August 29.

Frank Waln will be on the stage with Willie Nelson and Neil Young for the benefit concert "Harvest the Hope" in Bold, Nebraska as part of the Cowboy and Indian Alliance protesting the Keystone XL.

Images by Honor the Earth and G. Nienaber