On Sunday, Sept. 29, Anishinaabe horseback riders began a solemn ride along the proposed route of the Enbridge Alberta Clipper Pipeline in northern Minnesota. The ambitious goal is to complete 200-230 miles over 9 days, with one day of rest on the 8th day. The ride began at the Wisconsin-Minnesota state line and continued 23 miles to the Kiiwenzii camp on the Fond du Lac Reservation. 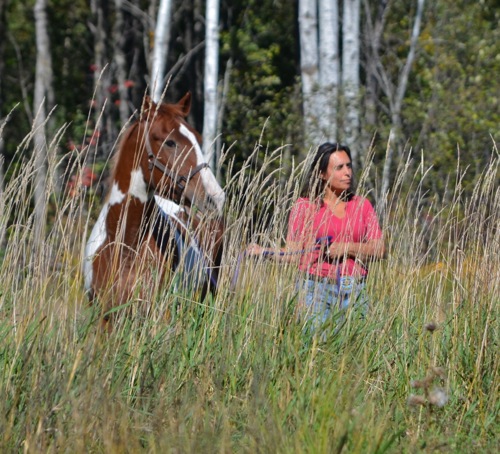 A drum ceremony and blessing by the Little Horse Drum Group, led by Terry Goodsky, greeted the riders. Supporters surrounded the singers on the grassy edge of a roadside outside of the Superior Terminal of the Enbridge pipeline.

Marty Cobenais of the Indigenous Environmental Network said, "The blessing will bring spiritual guidance to keep the Alberta tar sands in the ground and stop this assault on Mother Earth."

The proposed pipeline, if completed, will make it the largest tar sands pipeline in the world. Honor the Earth, with the support and leadership of founders Winona LaDuke and the Indigo Girls, intends to draw attention to the current expansion, which is under consideration by the Minnesota Public Utilities Commission. Late this summer, the Commission re-opened deliberations on the pipeline, which will carry "the dirtiest oil on the face of the earth," according to a statement by Honor the Earth.

Activist and former 1996 and 2000 Green Party Vice-Presidential candidate LaDuke expressed concern about Enbridge's maintenance history on an existing sixty-year-old pipeline that runs under the Straits of Mackinac. The Straits connect Lake Huron and Lake Michigan. The current expansion request would allow an additional 50,000 barrels per day. The National Wildlife Federation estimated that even with a shut-off time of eight minutes after a rupture, as much as 1.5 million gallons could spill from this pipeline into the Straits of Mackinac.

"There are a lot of unemployed or potentially employed union workers who would appreciate jobs in making these oil pipelines safe," LaDuke said in a statement. "We should put our people to work cleaning up American infrastructure, from bridges to sewer systems and pipelines, before we put them to work destroying Mother Nature."

Enbridge does not have a stellar maintenance record.

843,000 gallons spilled from an Enbridge pipeline into Michigan's Kalamazoo River in 2010. The Environmental Protection Association estimates that now, three years after the spill, 280,000 gallons still remain in the river.

A 50,000-gallon spill in 2012 near Grand Marsh Wisconsin prompted the United States Department of Transportation Pipeline and Hazardous Safety Administration (PHSMA) to order Enbridge to submit plans to improve the safety of the Lakehead System.

The Great Lakes waterways are the world's largest freshwater system and contain one fifth of the freshwater in the world. Water is not a renewable resource.

The riders will cross treaty land and meet with community and indigenous leaders--urging local input into pipeline expansion proposals.

The Honor the Earth Ride Schedule is as follows:

Departure times will be decided the night before each departure, and arrival times will depend on the horses.