First Person Artist is a weekly column by painter Kimberly Brooks where she features thoughts about art, process and showcases artists' work from around the world.

I ran into a friend of mine recently in a restaurant, and while greeting her with a kiss on the cheek, I accidentally knocked out a "Bluetooth" earpiece that allows her to answer the phone without touching a phone with her hand. "Oops! My Bluetooth!" she said as it fell in her salad. I once had swaths of time and space when I wasn't connected to any one and cell phones were shaped like small refrigerators. Now, I feel like I forgot my foot if I don't have mine with me. I think about this a lot as I continue to resist the urge to be reachable by email or have access to the internet when I'm not sitting in front of the computer at the end of the day. At my studio, there's nothing but a radio (okay okay, it's cable), glass jars, chairs, tables, easels, turpentine, paint, brushes and canvases. That's it.

I constantly marvel over how technology has integrated itself into our very being making us practically unrecognizable to our prehistoric selves. This was on my mind when I walked into the Obsolete Gallery and discovered, among other treasures, the work of Ron Pippin. There I found an antique canoe with a plastic heart inlaid in resin suspended from the ceiling next to a zebra skull with a piston jutting into it's jaw beneath a glass museum case. 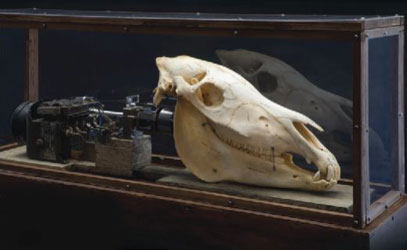 Kimberly Brooks: What do you seek to impart by aesthetic and combination of materials you use in your work?

Ron Pippin: My work is often related to ideas about the relationship of Science, Art, and Nature. My scientific aesthetic is primarily drawn from the 19th Century, when, I feel, science still had a relationship to beautiful forms. 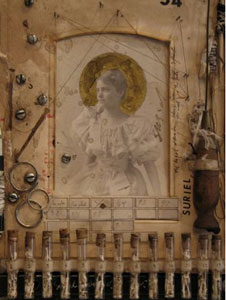 KB: Is there a moment or experience that set you on a certain path?

RP: As a child I was extremely shy. I discovered that by making pictures I could get attention by having people look at my pictures instead of them focusing their attention on me. In kindergarden my Halloween, Thanksgiving,Christmas and Easter pictures were displayed in the hallway of the elementary school. This you could say was my first exhibition, so the die was cast at a very early age. 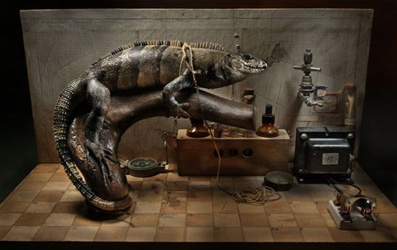 KB: Tell me about your process. How do you make art?

RP: My process of working is to reach inside of myself and pull out every shred of willpower and discipline I can find and force myself to be in the studio every day, whether I feel like it or not. When I was in my early 30's I decided that since life is so short I would make a commitment to making art --I haven't regretted it one day. KB: what would you like people to experience when they see your work?

RP: What I hope people take with them after looking at my work is really nothing particularily lofty or mysterious. The work is simply about our humanity and our connections with one another and our world. 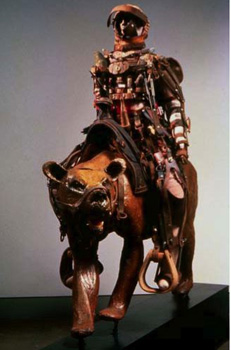 Ron Pippin has been a working artist for more than forty years. He has participated in over eighty solo and group shows worldwide and has been prominently featured in leading art world publications. His awards and commissions are numerous and can be found in various permanent collections including the Hirschhorn Museum and Sculpture Garden in Washington, D.C. His current exhibition at Obsolete, features a forty-year retrospective of select work. www.ronpippin.com