History may be remembered as a series of grand events, but its particulars are often mundane.

The first photograph was of a partially obscured roof, the first television broadcast was of a ventriloquist's dummy, and ... well, we've all seen "Me At The Zoo."

The first photo ever posted on the Internet, which turns 20 years old July 18, fits nicely into that milieu of mediocrity, but it's backstory is just a teeny bit more fabulous.

Years before CERN gave us the particle that might be the Higgs Boson, it gave us the science-themed mid-century girl-group sounds of Les Horribles Cernettes.

The all-girl comedy band, formed by secretaries and girlfriends of scientists at the famous particle physics lab in Geneva, Switzerland, was the subject of the web's first image.

Taken as a promotional photo, then later edited and uploaded as a GIF, the image was, as Vice pointed out, "born with some original sins that have never quite washed away" -- namely, bad Photoshopping and comely ladies with commercial motives.

According to its official site, which hasn't changed much since it launched in 1992, the Cernettes also claim the distinction of being the first band on the Internet.

The photographer was the band's Svengali, Silvano de Gennaro, who wrote songs and also played in the group's live manifestation. He's now married to one of the girls from the group.

“When history happens, you don’t know that you’re in it,” de Gennaro told Vice.

According to correspondence from de Gennaro published on Wikipedia along with the photo, there was a little trouble getting the image onto the web, such that an exact date of publication cannot be known.

"[It was] on and off the web for a few months, until one day the GIF interface worked fine and the photo stayed on the server and became accessible to the other surfers," de Gennaro wrote.

Twenty years ago, the Internet was in its infancy; file sharing controversies didn't yet exist and, perhaps unlike most bands on the Internet today, the Cernettes seemed more interested in having fun and entertaining their niche audience.

And they weren't the only ones at CERN moonlighting as entertainers. A former Cernette, Colette Marx-Nielsen, told Vice that World Wide Web inventor Tim Berners-Lee sometimes masqueraded dressed as a woman in part of an amateur operatic society.

Maybe part of the fun of sharing on the nascent web was that relatively few people might learn your secrets. Oh, the good old days.

Clarification: Technically speaking, this photo was the first posted to the World Wide Web, which is one of the many ways to access the Internet. Methods of using the Internet without using the Web include e-mail and instant messaging. Loosely, the Internet can be thought of as the architecture, and the Web as one of several interfaces for accessing it. However, in today's parlance, what is actually the World Wide Web is commonly referred to as the Internet, hence the usage in this article. 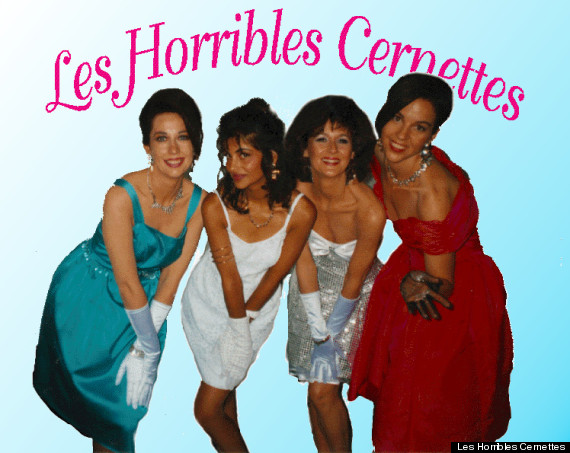