The first photographic image ever uploaded to the Web was a Photoshop disaster. It was created to sell something, and featured attractive women in a come-hither pose.

In short, photo-uploading was born with some original sins that have never quite washed away.

Here it is, in all its glory: 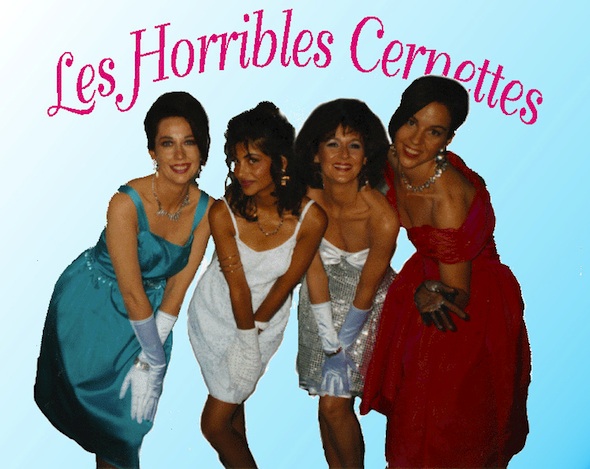 Next Wednesday, July 18th, the photograph at the center of that image — a homemade promotional shot for Les Horribles Cernettes, a comedy band based at the CERN laboratory near Geneva — will turn 20 years old. Despite the artifact’s world-historical significance, its full story has never been told. Few enthusiasts of art or photography or technology will be marking its 20th birthday, in no small part because it’s such an odd and un-artistic image.

“It’s sort of terrible and charming,” said Lesley Martin, a photo scholar at the Aperture Foundation, after being shown the image for the first time. But she added that that’s par for the course with photographic firsts. The first known photograph, for example, was of a semi-visible rooftop, seen through a window.

“They’re always semi-accidental and seemingly inconsequential at the time,” Martin told me. “The first photos are always, from the perspective of a sophisticated viewer today, somewhat non-events and of non-subjects.”

The first Web photo was no exception. It wasn’t even taken for the purposes of science or technology. The photographer, Silvano de Gennaro, was an IT developer at CERN who worked near Tim Berners-Lee and the other scientists who had invented the Web and made it public in 1991. But “I didn’t know what the Web was,” he recalled.

On July 18th, 1992, de Gennaro was backstage at the Hardronic Music Festival, an annual event thrown by CERN’s administrators, waiting for the Cernettes — whom he managed, and whose songs he writes — to come on stage. He wanted a picture for their next CD cover, so he told the four members to lean in and smile.

His Canon EOS 650 clicked, and that was that. “When history happens, you don’t know that you’re in it,” de Gennaro said. 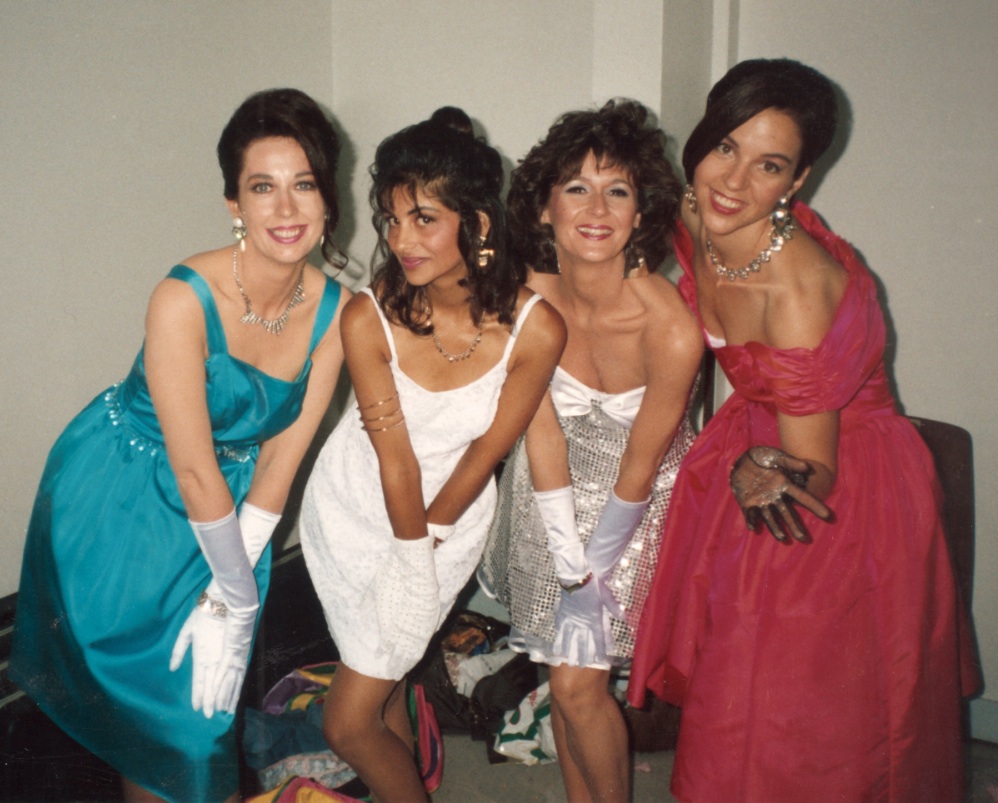 But why did the Cernettes become part of history and not, say, a particle accelerator? Partly because Tim Berners-Lee was into crossdressing.

“I don’t know whether I should be telling you this, but he worked at CERN and I saw him because he was part of our pantomime in our amateur operatic society,” remembered Colette Marx-Nielsen, a Cernettes member (she’s second from the right in the photo). “He was the dame dressed as a woman.”

De Gennaro and his then-girlfriend Michele were also heavily involved in that dramatic society and befriended Berners-Lee there. In turn, he became a big fan of the Cernettes.

But Berners-Lee wasn’t the only one: the Cernettes, comprised of administrative assistants and significant others of scientists, were taking the European physics community by storm in 1992.

Their songs all adopted mid-century girl-group tropes, but with titles like “Liquid Nitrogen” (You said I’d be yours 30,240,000 seconds a year /Including leap years, which means 86,400 extra every four") and “My Sweetheart’s a Nobel Prize” (“I don’t understand / the funny signs on his blackboard / But when he holds my hand / he takes me to the stars”). Here’s one verse of “Collider”:

You say you love me but you never beep meYou always promise but you never date meI try to fax but it’s busy, alwaysI try the network but you crash the gatewaysYou never spend your nights with meYou don’t go out with other girls eitherYou only love your collider

That year they were playing festivals and appearing on TV.

“Surfin’ on the Web,” The Cernettes

So when Berners-Lee and his team cooked up a new edition of their still-primitive World Wide Web system, one that could support photo files, he went a few steps from his workstation to ask de Gennaro for a Cernettes-related image. The Web had already used a few small vector image files to show off schematics, but Berners-Lee and his team needed a guinea pig for the leap into photos.

CALL ME ON THE WEB

Lucky for him, de Gennaro had been toying around with a scanned .gif version of the July 18th photo, using version one of Photoshop on his color Macintosh. The .gif format was only five years old at the time, but its efficient compression had made it the best way to edit color images without slowing PCs to a crawl.

Berners-Lee handed the file off to Jean-François Groff, a programmer on the Web project. He was only too happy to work with it.

“Sex sells!” Groff said with a laugh. “It’s media. You put a pretty girl in the media, people will notice the media. And whatever is around the pretty girl? Sure.”

But the reason the image was so important in “selling” the Web’s image support had less to do with attractive women than it did with taking a small — but incredibly significant — shift in the purpose of the network, Groff pointed out. Up until then, the team had put their program on the Internet to reach out to a few hundred outlets worldwide, mostly physics labs.

“In order to convince management that we should connect CERN to the Internet and not just to proprietary networks, we had to fight to convince them how useful it would be,” he said. “That’s why we only put serious stuff on it. So it was kind of a revolution to say, ‘Now let’s do something fun with it.’”

So using the Web for fun – and not for say, collaborating with scientists around the world to make ground-breaking discoveries – was another original sin of the first photo. Although that’s probably more of an original virtue.

The upload was simple and uneventful — uploads of anything on the early Web were more like saving a word-processing doc than anything else, Groff recalled. It popped up on a page about musical acts at CERN. (Today, the network operated by the lab that birthed the Web, is, appropriately, one of the fastest in the world: it spans 34 countries, uses 200,000 processors and handles a stream of data from the Large Hadron Collider experiment at about 300 MB per second.)

A microscopic percentage of the world saw the online version of the photo. “I had many more people seeing that photo on the posters around CERN,” de Gennaro posited. But in an almost imperceptible way, the world changed.

The image passed into obscurity, soon eclipsed by larger photographic projects (an effort to scan images from the Vatican archives was perhaps the most famous). The Mac on which the .gif was made died around 1998, de Gennaro recalled, and with it went the original version of the file. 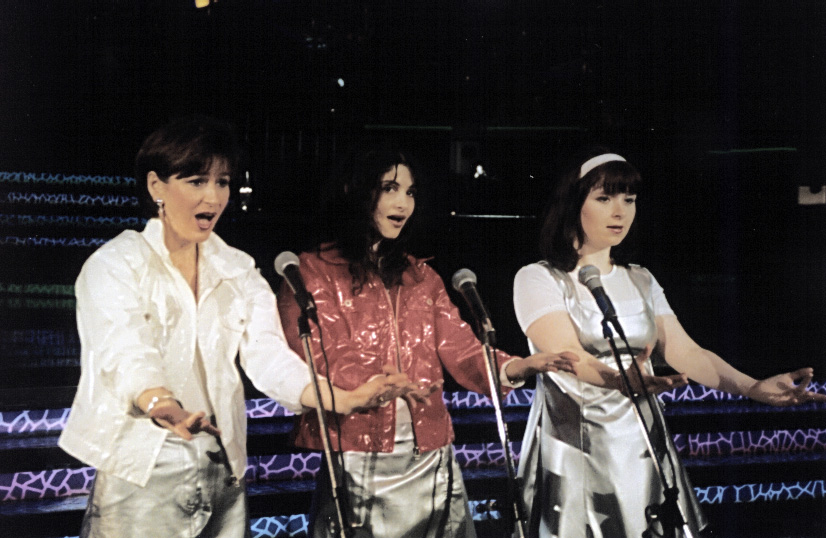 The Cernettes have performed on and off with various lineups through the decades — by sheer coincidence, their last-ever concert is scheduled for next Saturday. De Gennaro, who is now married to Michelle, said he’s not sure whether she or her bandmates will mention the photo onstage. He added, with a small grunt of frustration, that the image’s minor fame has always marginalized the group’s musical work.

But the nature of the band is essential to understanding some of the curious artistic significance of the photo. After all, this step into the future featured women wearing outfits that aped styles of the ’50s.

“This was this kind of retro parody image,” said Harvard photo historian Robin Kelsey. “There did seem to be something about that recycling of culture that seems so appropriate for the first image uploaded to [the Web], given the way that the Internet has spawned so much of that kind of recycling and mashing-up and pastiche and parody and so on.”

“It’s interesting — particularly for those of us who are relative old-timers — to realize that this technology, which still feels so new, already has its own kind of archaeology now,” Kelsey added. 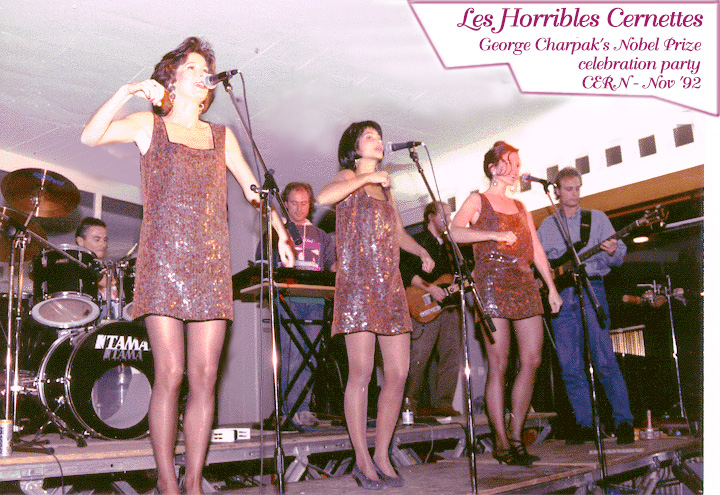 That archaeology isn’t currently in any textbooks. Indeed, the 20th anniversary of the Web’s first photo isn’t even this July’s most significant CERN-related news, obviously. Ultimately, in the history books, Les Horribles Cernettes are likely to be eclipsed by the device that shares their initials, the one that may have just discovered the Higgs boson. In any case, despite its significance, the subjects of the Web’s first photo never thought of themselves as celebrities.

“I kinda put it out sometimes and say, ‘Well, I’m in the first photograph on the World Wide Web.’ People don’t really care,” said Marx-Nielsen, a vague air of wistfulness in her voice. “I suppose it had to be somebody, and it just happened to be us.”

Abraham Riesman is a writer living in New York City. You can see more of his work here.