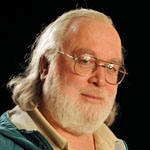 By Dr. Laurance Doyle, an astrophysicist at the SETI Institute, and lead author of a paper that will appear in the journal Science on September 15, 2011.

For the first time, astronomers with the NASA Kepler spacecraft mission have discovered a planet orbiting two stars. This is a fundamentally different kind of planetary system than has ever been discovered before. The new system is known as "Kepler-16" and consists of two stars -- one about 69% the mass of the Sun, and the other only 20% the mass of the Sun, which circle each other every 41 days. Around both of these circles the Saturn-mass planet, half rock and half gas, known as Kepler-16b, with a period of 229 days. Even though the planet has an orbital period of less than a year, it is still outside the habitable zone of the stars because the stars are much dimmer than our Sun.

Where the Sun Sets Twice - NASA's Kepler mission has discovered a world where two suns set over the horizon instead of just one. The planet, called Kepler-16b, is the most "Tatooine-like" planet yet found in our galaxy. Tatooine is the name of Luke Skywalker's home world in the science fiction movie Star Wars. In this case, the planet is not thought to be habitable. It is a cold world, with a gaseous surface, but like Tatooine, it circles two stars.

The discovery that such "circumbinary" planets can exist increases the likelihood of success of the Kepler Mission, which is to detect the first habitable; i.e., Earthlike, planets around other stars. Perhaps half the stars in the galaxy are in double star systems. Understanding that planets can form in close binary systems means that these, too, can be targets in the search for habitable worlds.

In the Light of Two Suns - This artist's concept illustrates Kepler-16b, the first planet known to definitively orbit two stars -- what's called a circumbinary planet. The planet, which can be seen in the foreground, was discovered by NASA's Kepler mission.

The research team discovered the circumbinary planet in an eclipsing binary system. This is a double star system in which both stars orbit each other across our line of sight, so that eclipses of the stars occur with regularity. Historically, much of what we know about stars sizes comes from such eclipsing binary systems. In addition, the planet's orbit was found to lie very close to the same orbital plane - the difference in the tilt of their orbits is less than 1/3 of a degree - so that the planet also moves across the disc of each star, momentarily blocking some of the light. Such events are called "planetary transits" and most of what we know about the sizes of planets outside the Solar System comes from such transit events. Thus we have the best of both worlds, and Kepler-16 is probably the most accurately measured planetary system outside our own.

Some scientists have nicknamed the planet "Tatooine" after the name of the home planet of Luke Skywalker, the hero in the 1970s science fiction movie Star Wars. In the story -- in a hypothetical galaxy far, far away, -- a circumbinary planet's double sunset was first brought to the screen. The public's vision of circumbinary planets thus goes back decades. But today science fiction has become science fact, and that galaxy far, far away has become our own galaxy. A whole new kind of planetary system has been shown to exist and -- like Luke in the story -- the adventure is just getting started.