"If all goes well, the schedule will include an entire six months of training for space travel for our crew and performers before we’re comfortable with launching them into space," Price told The Huffington Post by email. "We need to know all participants are sufficiently prepared for the rigors of space-age coital activity (as well as filming in or past the stratosphere)."

Lovia, 26, is particularly excited about the opportunity.

"The bragging rights alone are worth it," she told The Huffington Post. "We don't know if any astronauts have had sex in space, so we'd be the first to publicly admit it."

Surprisingly, this astronaughty has yet to get into the Mile High Club, much less do it 68 miles above Earth.

"I've never done it, mainly because the only place you can do it is in the bathroom -- and they're disgusting!" she said. "This will be a lot more sanitized, plus, we will have use of the whole plane, not just the bathroom." 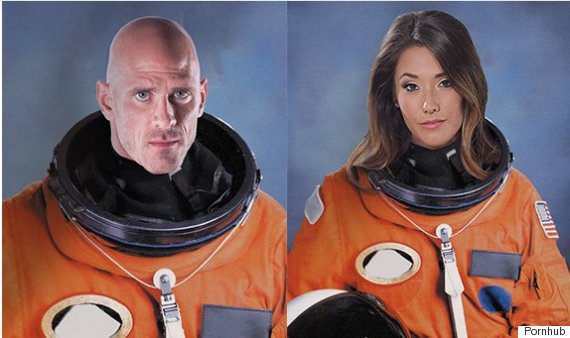 Price said the plan is to have Sins and Lovia go aboard a shuttle with a six-person film crew.

"The production of the video will begin when the spaceship takes flight. Filming will commence upon takeoff and as the ship climbs, so too will the lovemaking," he said. "As soon as the ship reaches its maximum altitude there will be weightlessness for at least a few minutes. Our actors will be having sex and climaxing within that time frame –- ideally, of course."

"Thankfully, we have a very experienced production crew and directorial team to help make the money shot happen in a way that looks dynamic and revolutionary for viewers," Price said.

Raising $3.4 million is a challenge for any crowdfunding campaign, much less one that involves explicit sexual activity.

Then there is the nagging problem of whether private space travel companies like Virgin Galactic or SpaceX would agree to allow their shuttles to be used in the first place, much less be willing to clean up the mess afterwards.

"Because of the nature of our endeavor, we aren’t really able to disclose the details of those talks just yet for fear that that would risk unnecessary fallout from the aforementioned parties."

"Sex is very difficult in zero gravity, apparently, because you have no traction and you keep bumping against the walls," biologist Athena Andreadis of the University of Massachusetts Medical School told SPACE.com in 2011. "Think about it: you have no friction, you have no resistance."

Lovia is thinking about other aspects of the endeavor including an unprintable quote about how she's looking forward to dealing with a floating money shot.

She also is thinking about what to do for an encore should this (e)mission succeed.