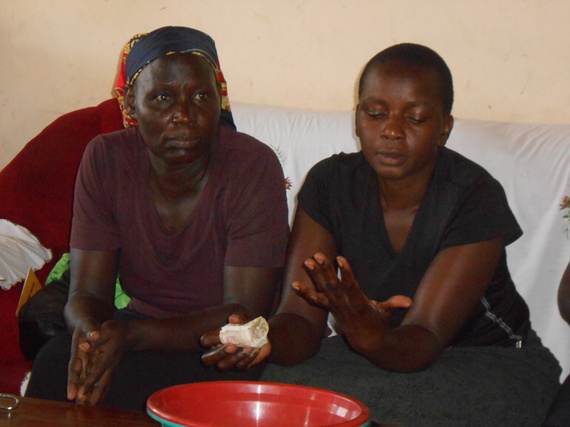 During a recent meeting of a women's savings group in Manyatta, the largest slum in Kenya's third largest city, Kisumu, after the week's business had been conducted, the conversation turned to the women's daughters, all of whom, they said, were at risk of being or had been sexually assaulted on their way to or from school.

Every one of the dozen or so women in the group knew a primary-school aged girl who had been attacked or raped, often by the young men driving the boda-boda or bicycle taxis, who, the mothers said, would lure them into their cabs, promising rides, and then attack them. This reality was the predicate for the question put to me by one of the mothers in the group, with which my organization, WomenStrong International, is affiliated: "How do we keep our nine- 10- and 11-year-olds from getting pregnant, since they are getting raped, and they are too young for family planning?"

As I sat stupefied, searching for any answer, she told me that an 11-year-old from the community was currently in labor over at the teaching hospital, waiting to deliver her child of rape.

Another mother told me that sometimes they walk their daughters to school, but then they, too, were frequently accosted. "At least, then, the girls can run away," she said. These women also experience a more transactional form of sexual exploitation early each morning, when they walk down to the shores of Lake Victoria to buy fish, armed with a few hard-earned Kenyan shillings and small children in tow, and are told they must first have sex with the fishermen.

When they try to report these crimes, the women told me, the policemen on duty taunt them or their daughters. "Hah! Are you the one who got herself molested?" one mimed a local cop's jeering while pointing at her child. Those who had gone to the Police Department's "Child Protection Desk" reported finding it unstaffed, and the much-ballyhooed new Rape and Trauma Management Unit over at the teaching hospital never seemed to be open when needed.

An hour later, at another community meeting in Manyatta, an NGO leader congratulated attendees for their neighborhood having been declared "the safest slum in all of Kenya" by the Security Research and Information Centre (SRIC), a top security analysis firm in Nairobi.

Stunned by the vast gulf between being designated Kenya's "safest slum" and what it might actually mean to be "safe" there, I asked the Ward Administrator for this area how this could possibly be the case, given that every woman in the earlier meeting was close to someone who had experienced sexual assault. He shrugged and blamed some primary school teachers who insisted their students be in their seats before sunrise, so they could cram all day long for exams. But this did not explain the prevalence of sexual assault happening in broad daylight, and in exchange for fish.

Other explanations given by SRIC's survey respondents included women too ashamed to report rape or sexual assault; too afraid that the police or their own husbands would further abuse, punish, insult or ridicule them and that the police would take their husbands' side; and that it wouldn't do any good to report these things, as nothing ever seemed to come of doing so.

The researchers acknowledged, seemingly with some frustration, that for these and other unreported reasons, their survey had not captured much helpful information about violations perpetrated against the body or integrity of the individual. Yet based on those incidents most frequently reported - largely armed robbery and other property-related crimes - the analysts went ahead and concluded that, in 2014, Manyatta - where few hold assets worth stealing, and where it has long been a covenant among thieves not to further impoverish their own community by carrying out muggings or burglaries - was Kenya's safest slum.

This stark disjunction only reinforces the voicelessness, and the ridicule, of the victimized women and girls - how can their complaints be real, if the place is so safe? Yet even if the women's accounts are taken seriously, the problem is not so easily remedied.

For it would require nearly a complete social and physical transformation to make Manyatta genuinely "safe" in ways that could more effectively prevent violence against women and girls. Significant infusions of financing would be needed to ensure that someone is manning that Child Protection Desk in every police station, that the new Rape and Trauma Unit is fully equipped and functioning, that boys, young men and fathers (policemen, boda-boda drivers and fishermen included) are taught to respect and protect their sisters, mothers, daughters and friends, that more of these trained police be assigned to the streets, and that street-lighting be installed, so that no one need walk to school in the dark.

Short of all this, we can start by reconsidering the blinkered definition of "safety" assumed here and in countless contexts worldwide. In Kisumu, this entails acknowledging that the slum proclaimed the nation's safest is in fact unacceptably unsafe, for the bodies, souls and wellbeing of Manyatta's girls, women and all who claim to care about them.

But the effort cannot stop there. Given the ubiquity of sexual violence and government's apparent disinclination to intervene, it must be the mothers and fathers and sons and daughters who speak up - loudly, and repeatedly - about the lazy or insensitive or abusive policemen, and who demand that training, and refresher training, be required of all law enforcement officials and offenders alike. Parents need to stop sending their daughters out after dark for water, wood or food and to organize themselves into groups that can walk their girls to school. And women can boycott those fishmongers insisting on "sex for fish."

The impetus to create truly safe neighborhoods will not come from the top. In Manyatta and far beyond, poor communities have the opportunity to implement preventive measures that can demonstrate for those in power what it means to value their mothers and daughters enough to protect them.